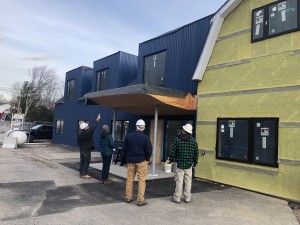 Workers continue to make progress on the construction of Makers Mill in Wolfeboro, which is envisioned as a community makerspace and vocation hub where students, hobbyists and professionals can learn, teach, practice and collaborate around a wide variety of skills and crafts that support personal, professional and community goals. The majority of the work is due for completion by the year’s end, leaving a short punch list in the new year before a certificate of occupancy will be sought, positioning Makers Mill to open the first dedicated. Here, the façade of the facility features new dormers installed by Chestnut and Cape, new metal siding by Construx Inc., and a new asphalt and membrane roof installed by Master Roofers.

Mountain Valley Mall in Conway has been sold for about $26.5 million, The Conway Daily Sun reports. The mall includes as Hannaford and Lowe’s stores as well as the Mountain Valley Cinema 7, Mystery NH Escape Room and the Premier Home Store. A Delaware LLC owned by RPT Realty of New York City – owner of 57 open-air shopping centers around the country – acquired the property from KGI Properties of Providence, R.I., which acquired the mall in 2005. Mountain Valley Mall opened in 1980.

The 10,000-square-foot building at 1069 S. Mammoth Road in Manchester has been sold for $1.4 million. Matthew Bacon and Cassandra Farley of SVN Masiello Commercial represented the seller, 14 SMR LLC. The buyer, Lynch Real Estate Holdings, was represented by Mike Reed of Stebbins Commercial Properties.

Lise Howson, executive director of Coös Economic Development Corp., has announced her plans to retire by June 2022. Glenn Coppelman, president of the CEDC board of directors praised her “steady hand and professionalism.” The search for her replacement has begun, including an appeal to community members to recommend candidates. For more information, contact Howson at execdirector@coosedc.org or 603-788-3900.

Boothby Therapy Services, Laconia, has purchased $100,000 in Community Development Finance Authority business tax credits to support the redevelopment of the Gale School in Belmont. The project will transform the historic schoolhouse into a community facility that will include a new early learning center operated by the Boys & Girls Club and a new program center operated by Lakes Region Community Services. Construction on the Gale School, being developed by Lakes Region Community Developers, could begin in summer 2022 if all funds are secured as planned.