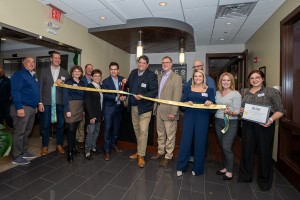 ACRES Commercial Real Estate Services held a ribbon-cutting ceremony in October to celebrate the opening of its office in Concord. ACRES is designed as a one-stop real estate services shop offering appraisal, title and closing work for commercial deals. Luke Kraus is ACRES’ general counsel and team leader of Title and Closing Services and John Prieto is team leader of valuation and appraisal services.

Rents in Manchester decreased 1.6 percent in September from the previous month, a greater decrease than the average a 0.7 percent recorded nationally, according to the website Apartment List.

Year-over-year, rent growth in Manchester currently stands at 2.3 percent, one-tenth the 24.9 percent increase recorded at this time last year. Nevertheless, Apartment List said, rents in Manchester are up by 36.5 percent since the start of the pandemic in March 2020. Currently, median rents in Manchester stand at $1,303 for a one-bedroom apartment and $1,738 for a two-bedroom.

Melville, N.Y.-based A&G Real Estate Partners is marketing for either lease or sublease 81 storefronts next to Pep Boys Service Centers across the United States, including several in New Hampshire.

The H.L. Turner Group Inc., Concord, has hired Douglas Brodeur as a senior civil engineer. He has over 20 years of experience, with an emphasis on land development and permitting, municipal projects and stormwater infrastructure design.

The town of Swanzey has hired Julius Peel of Washington, NH, as its land use and zoning coordinator. He previously interned with the town in 2020 and after that served as land use assistant for the town of Milton and town administrator in Deering.

The 16th annual Keller Williams charity auction at Manchester’s Derryfield Country Club raised some $105,000 through live and silent auctions, raffles, door prizes and event sponsorships. The funds will be distributed to local nonprofits that work to improve the lives of children and families, including the Boys & Girls Club of Manchester, the Mental Health Center of Greater Manchester and NeighborWorks Southern New Hampshire, among others. Organized annually by Keller Williams Realty Metropolitan, with offices in Bedford, Concord, Keene, and Londonderry, the event has raised over $1 million in direct donations since its inception.

Its design of the Center School in Greenfield, Mass., earned Banwell Architects, Lebanon, a Fall 2022 Award for Outstanding Projects from Learning By Design Magazine. The school serves 130 students from Pre-K -8th grade.

The Workforce Housing Coalition of the Greater Seacoast’s 2022 Seacoast Housing Summit, “Economic Crossroads: Housing Our Workforce,” will be held from 8 a.m. to 10 a.m. Thursday, Nov. 3, at the Governor’s Inn & Restaurant, 78 Wakefield St., Rochester. Keynote speaker will be Mike Skelton, president and CEO of the Business and Industry Association, followed by a panel discussion moderated by Sarah Wrightsman, community engagement coordinator at New Hampshire Housing, and featuring

Nashua-based Granite Commercial Real Estate has announced the sale of 256 Daniel Webster Highway, Merrimack, a 4,766-square-foot industrial building on 2.2 acres. James Prieto, director of real estate at the firm, represented the seller in the transaction.

Portsmouth-based Position Imaging Inc., a maker of package logistics and asset tracking systems, has unveiled In-Room Scanning, a new feature for its Smart Package Room platform. The feature, which leverages the same hand-held scanning process couriers are familiar with to automatically assign packages to residents in multifamily communities, improves accuracy and compliance and streamlines their work by 50 percent, Position Imaging said.

The Manchester Board of Mayor and Aldermen has voted to approve $3 million in federal funds aimed at significantly increasing the number of affordable housing units in Manchester through three projects. With the funding, Lincoln Avenue Capital of Santa Monica, Calif., will construct two buildings with affordable housing, one at 351 Chestnut Street, site of the former police station, and a second replacing a parking lot across the street at the corner of Chestnut Street and Merrimack Street. Together, the projects will create approximately 142 studio, one- and two-bedroom units, affordable for individuals at or below 60 percent of area median income. The third project will create three new units of emergency housing for families experiencing homelessness at the Families in Transition Family Place Shelter at 167 Lake Ave.

Sullivan County has been awarded $25.2 million by the Governor’s Office for Emergency Relief and Recovery’s County Nursing Home Infrastructure Program, to help fund the planned renovation of the county nursing home, which is expected to cost up to $63 million. In August, the county delegation unanimously approved a $20 million bond for the project with a provision that county commissioners could bond an additional $6 million if the project’s total cost warrants it. The rest of the funding will come from $2 million the county has received in federal funds, $7 million from the county’s share of the American Rescue Plan Act and up to $5 million from the county’s capital reserve fund.

Condor Capital is proposing a 128-unit apartment building in downtown Somersworth The four-story building would house mostly one-bedroom apartments, each about 750- to 850-square feet. The project is still in its preliminary stages, and has been under review by the city’s Historic District Commission, Foster’s Daily Democrat reported.

Colby-Sawyer College in New London has received $1.5 million in federal funding to support construction a new 20500-square-foot building for its School of Nursing & Health Sciences. The funds bring the total amount raised for the $15.7 million project to $9.5 million. Construction of the facility, slated to begin this spring and be completed by fall 2024, will also allow the college to integrate state-of-the-art technology into its classrooms and laboratories.