DOT commissioner to step down after 7 years … and more 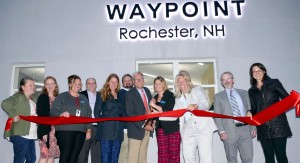 New Hampshire Transportation Commissioner Victoria Sheehan, who has led the agency for the last seven years, will be stepping down from the job on Nov. 25 to had National Academy of Sciences, Engineering and Medicine’s Transportation Research Board in Washington, D.C. The board’s 120-person staff provides independent analysis on transportation matters for policymakers.

Sullivan County has been awarded $25.2 million by the Governor’s Office for Emergency Relief and Recovery’s County Nursing Home Infrastructure Program, to help fund the planned renovation of the county nursing home, which is expected to cost up to $63 million. In August, the county delegation unanimously approved a $20 million bond for the project with a provision that county commissioners could bond an additional $6 million if the project’s total cost warrants it. The rest of the funding will come from $2 million the county has received in federal funds, $7 million from the county’s share of the American Rescue Plan Act and up to $5 million from the county’s capital reserve fund.

Recordsforce, a Portsmouth-based provider of document scanning, document management and cloud services, is expanding operations with a new facility in Manchester. The company says the expansion represents a significant increase in capacity due to demand for its outsourced digital mailroom services.

Wanda Keenan of Laconia has joined Roche Realty Group. Previously the owner and operator of Paramount Settlement Services, Laconia, she oversaw thousands of real estate closings. She also has experience in the home financing.

The Windjammer by the Sea hotel has been purchased at auction for $2.5 million by Alex Choquette, who plans to keep the motel running as is. Choquette, who was the highest bidder in the online auction, told the Portsmouth Herald the hotel seemed like a good opportunity. Formerly known as the Homestead, the. Windjammer was built in the early 19th century. It has been used as a hotel for over 200 years.

The Hanover Selectboard has unanimously approved an ordinance that requires regular inspections of all rental properties in town, including bedrooms rented in owner-occupied residences, in an effort to address concerns about the safety and livability of housing options in town. The Valley News reported that the new ordinance provides the tools and authority for the town to enforce existing health and safety requirements for rental properties, which were adopted in 2013. The new ordinance requires all rental units in Hanover to be inspected every three years in order to receive or renew a town-issued permit allowing a rental unit to be occupied. Properties may also be inspected if a complaint about the property’s condition is filed with the town.