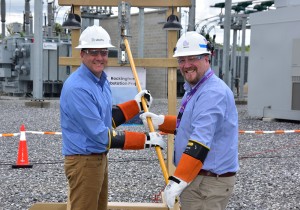 Gov. Chris Sununu, left, and Liberty NH President Neil Proudman flip the ceremonial switch at on the newly built Rockingham Substation at Tuscan Village in Salem, part of a 10-year project to double the area infrastructure’s electric capacity. The substation is part of a long-term project that is expected to be completed by the end of 2024 when aging powerlines are ultimately removed and two 70-year-old substations are decommissioned. (Photo by John Gauvin)

An official ribbon-cutting ceremony for the eagerly anticipated Franklin whitewater park will be held at 4 p.m. Friday, June 17. The ceremony will be held at Trestle View Park to mark completion of Phase 1 of the first whitewater park in New England, which included installation of the first wave adjacent to Trestle View Park, which also was upgraded to include a stone amphitheater for connection to the river. The project is the result of a public-private partnership between the city and Mill City Park and various volunteer and business groups.

The city of Manchester has issued a $3.4 million request for proposals for the development of affordable housing units in the city. Funding for the grants come from the U.S. Department of Housing and Urban Development HOME-ARP Program and the American Rescue Plan Act. The funds may be used for the development of non-congregate shelter, new affordable rental units or rehabilitation of existing units for “qualifying populations” and “low-income households” as defined by HUD.

Malcolm Badger has begun working as a sales agent at Badger Peabody & Smith after working at the North Conway office for a time as support staff. His grandfather, Dick Badger, founded Badger Realty in North Conway, which recently merged with Littleton-based Peabody & Smith.

The Belknap Economic Development Council has added Amanda Dudek to its staff as marketing and program navigator. The position is funded by the U.S Small Business Administration Community Navigator Pilot Program, which focuses on addressing barriers encountered by socially and economically disadvantaged small businesses and entrepreneurs.