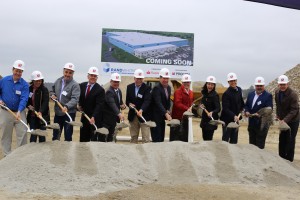 Town officials and executives from Rand-Whitney and Hooksett-based construction firm Procon are shown at the groundbreaking in Boylston, Mass., for Rand-Whitney Container’s new 384,000-square-foot packaging facility in Boylston. The Boylston facility is the firm’s fourth collaboration with Procon, which previously partnered with the firm on facilities in Dover, NH, Worcester, Mass., and Pawtucket, R.I. Rand-Whitney, the largest independent corrugated packaging manufacturer in New England, is owned by New England Patriots owner Robert Kraft.

The NH Preservation Alliance will be presenting its 32nd annual Awards for Outstanding Achievement in a virtual ceremony that begins at 5 p.m. on May 3. Registration is free, but donations are suggested. To register, visit nhpreservation.org or call 603-224-2281.

Concord-based Sanborn, Head & Associates has added Thomas Geiger to the staff of its office in Philadelphia, Pa. He will serve as a project director overseeing environmental consulting and regulatory work for clients in the Mid-Atlantic region and across the country. He has over 35 years of experience focused on investigating site environmental conditions and designing and implementing remediation strategies.

Matthew Bean has joined TFMoran Inc. as a structural project engineer in the firm’s Bedford office. During his undergraduate study at the University of New Hampshire, he worked as a summer fellow conducting research on the effect of freeze-thaw cycles on asphalt performance. Also joining TFMoran is Robin Carter, who will be working as an accounting assistant in the Bedford office. She has extensive experience in office management duties and customer service.

The Dairy Queen franchise store in Laconia has been sold after 21 years of ownership by Michael and Michelle Merrill to Brian and Mariluz Flanders. Ivor Thomas and Leon Parker of New Hampshire Business Sales represented the sellers in the transaction.

Mike Reed, president of Stebbins Commercial Properties LLC, has announced the sale of the 19,200-square-foot commercial building at 42-44 Bridge St., Manchester by Manchester Memorial Employee Credit Union to MOR Real Estate Holdings LLC, Manchester. Reed represented the seller and assisted the buyer in the transaction. According to the Registry of Deeds the sale price was $1.15 million.