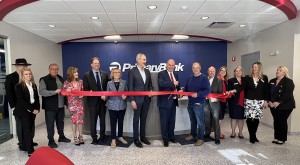 Gov. Chris Sununu, U.S. Sen. Maggie Hassan and Nashua Mayor Jim Donchess were among those in attendance to mark the opening of Primary Bank’s newest branch, its fourth, in Nashua. Primary President Bill Stone said, the new branch ‘will further strengthen our commitment to New Hampshire and the Nashua community, advance small business success and bolster the state’s economy.’

US LBM, an Illinois-based distributor of specialty building materials, has named Jannette Valdez of Nashua, inside sales representative at US LBM’s Wallboard Supply Company in Londonderry its 2022 Humanitarian Award recipient for her community involvement and charitable work. She also is the recipient of a $10,000 grant from the US LBM Foundation, which she has elected to be awarded to the Nashua Police Athletic League. Besides Nashua PAL, she also works to support other charitable organizations that support women, children and the homeless in Nashua, including Queen’s Closet, which provides business clothes to those searching for work and Revive Recovery, organizing food drives for people in recovery while they get back on their feet.

The former Chuck Roast Equipment manufacturing plant in Conway has been sold, previous owner Chuck Henderson has announced. Known as the Chuck Roast Venture Center, the facility was purchased April 1 by Pratap Bhandari of North Conway and Cape Cod, Mass., according to The Conway Daily Sun. Bhandari plans to continue to run it as the Odell Hill Office Park. Listing broker was Jim Doucette of Jim Doucette Real Estate of Conway and representing the buyer was Charlie Monroe of Pinkham Realty of North Conway. Henderson told the newspaper the selling price was $373,000. The building measures about 16,100 square feet. Chuck Roast, a well-known fleece apparel maker, closed its doors in 2008.

A crowd of employees, board members, employees, friends dignitaries and contractors were on hand for the official opening of new Peabody Place in Franklin on March 31, two days before all residents of the 1940s era former Peabody Home began moving in to the new facility. The first phase of the project is now completed and is dedicated to individuals interested in an assisted living environment. Upon completion of phase two, the 63,632-square-foot Peabody Place will more than double its original capacity and will include 45 assisted living apartments, 13 memory care apartments and 16 independent living apartments. The building was designed by EGA P.C. Engelberth Construction is heading up construction and the engineering work is being conducted by Nobis Engineering. Additional advisory work is being provided by New Hampshire-based RS Consulting and the Northern Community Investment Corp., St. Johnsbury, Vt.

The Building Trade Employers’ Association Northeast’s 2022 Building Trades National Recovery Week will take place April 25-29, marking a focus on the effort to curtail substance use disorder and the drug overdose crisis that’s affecting the construction industry.  An in-person ceremony will be held on  from 3:30 to 6 p.m. at the Local 7 Iron Workers building, 195 Old Colony Ave. Boston. From April 26 to 28, BTEA Northeast will host live webinars featuring nationally recognized experts to educate, train and identify resources for both labor and management to make workplaces and job sites safer.  On April 29, a National Job Site Stand Down will honor the lives lost to SUD. According to BTEA, there have been 229 overdose deaths for every 100,000 building trades industry workers.

“The construction industry is disproportionately impacted by the drug crisis,” said Thomas S. Gunning, executive director of BTEA Northeast. “We are in the middle of a mental health crisis and it’s time we talk about it.” For more information about the programs, click here.

Pittsfield, Maine-based construction firm Cianbro has announced the acquisition of R.C. Stevens Construction Company, a Winter Garden, Fla.-based firm. Cianbro officials said the acquisition will give the company a permanent establishment in the southeastern United States and open additional opportunities to expand its markets. Tim Keating, president of R.C. Stevens, will remain active and continue to lead the R.C. Stevens organization as president.