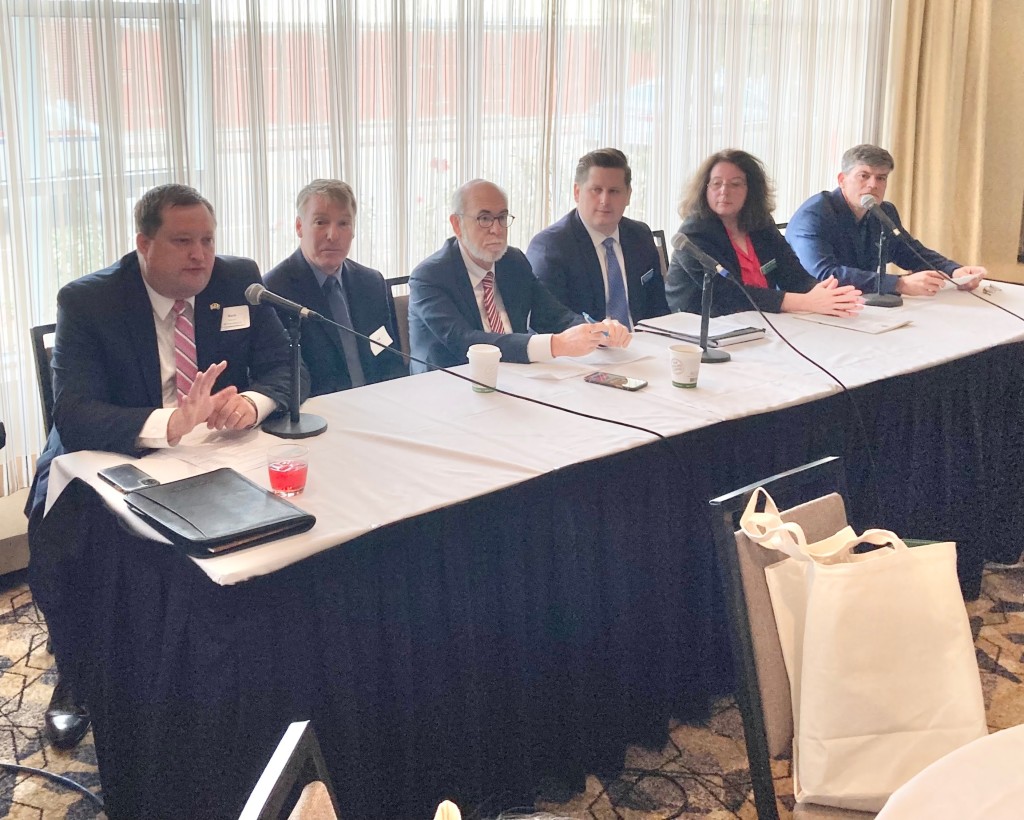 The development of offshore wind farms in the Gulf of Maine as a source of electric power offers opportunities for the state of New Hampshire, but the opportunities lean more heavily on economic benefits for the Granite State as opposed to direct energy benefits, according to information presented during a day-long New Hampshire Offshore Wind Summit held Sept. 27 in Portsmouth.

“The offshore wind sector requires significant coastal infrastructure for manufacturing, construction, marshaling and operations and maintenance. In each of these areas, significant investment is required to satisfy the unique needs of the sector, all necessary to develop an offshore wind installation,” said James Andrews, president of Granite Shore Power, a wholesale energy company that operates five power stations in New Hampshire.

As offshore installations in the Gulf of Maine come online in the years ahead, Andrews envisions the possibility of his plants retooling to become part of the grid that will ultimately deliver wind-generated electricity to the New England wide grid.

“GSP’s assets are ideally situated in proximity to major infrastructure necessary for reliable transition to the region’s next generation of energy resources in New Hampshire and to drive commerce,” said Andrews. Those assets include Schiller Station and Newington Station, both on the Piscataqua River, and Merrimack Station in Bow, White Lake station in Tamworth, and Lost Nation station in Northumberland.

Andrews was one of 24 presenters who covered four topics during the summit, held at the Sheraton Portsmouth Harborside Hotel and organized by the NH Department of Environmental Services, the Chamber Collaborative of Greater Portsmouth and the Business and Industry Association.

Topics included the state’s role in a Gulf of Maine offshore wind endeavor, the perspective from utilities and consumers, business and workforce opportunities and challenges, and infrastructure opportunities.

From the state’s perspective, it is a matter of preparation to make sure its interests and needs are fully represented.

“This is really a complex issue, an amazingly complex issue,” Gov. Chris Sununu said to the gathering of the 120 or so people who attended the summit. “You do need to make sure that all the right stakeholders are in the room, that the voices are heard. At some point we’ve got to make decisions whether to go or not go, where the costs and where this is going to be, and how it plays into what’s happening in New England.”

His job, he said, is to look after New Hampshire’s interests, to assess and take advantage of the opportunities that offshore wind might provide. “Because of how we’re situated, we are really poised to bring some of these opportunities of transmission and whatever it might be into New England through the New Hampshire corridor,” said Sununu.

“My job is to be super, super selfish only for the 1.4 million people in the 603. That’s all I really care about right now. That’s it, and we’ve got to make sure we’re putting them first every single time and fighting for their interests above all else every single time,” the governor added.

That fight would include not only the economic and energy benefits of offshore wind, but making sure the state is entitled to any mitigation funds for interests that might be adversely affected by wind farms — whale watches, fishermen, lobstermen and fishing charters, for example.

Up to 5 offshore leases

The U.S. government intends to offer leases in an area of about 13.7 million acres in the Gulf of Maine off the Maine, Massachusetts and New Hampshire coasts that could produce up to 65 gigawatt (GW) of offshore wind energy. (To put that in perspective, one gigawatt is equal to one billion watts. The typical home light bulb is between 60 and 100 watts.) 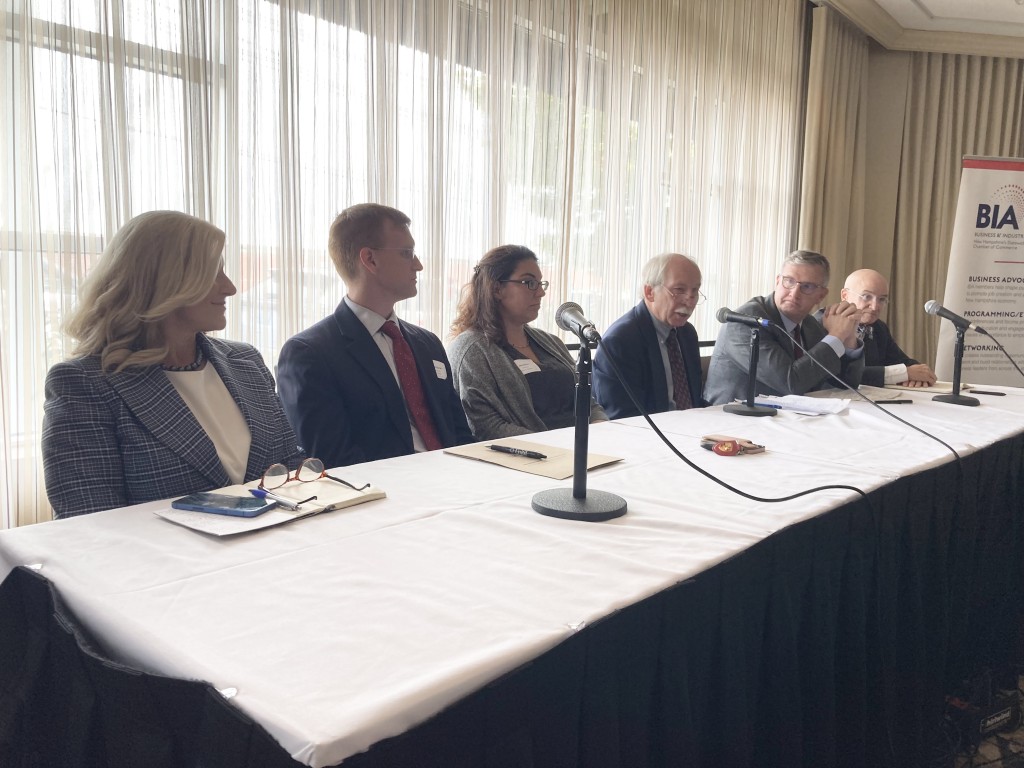 It is looking for commercial interest in these leases through an RFI (request for interest) that the U.S. Bureau of Ocean Energy Management (BOEM) will start reviewing once the comment period expires Oct. 3.

By 2025, the U.S. Department of the Interior plans to hold auctions for up to five offshore leases and review at least 16 plans to construct and operate commercial, offshore wind energy farms.

As an electricity source and as a hedge against climate change, wind is more important for the New England region as a whole than it is for New Hampshire as a state.

At present, New Hampshire is a net exporter of electricity – it doesn’t use the energy it produces, so it is not desperate for more in terms of the additional wattage that offshore wind can provide to the grid.

Also, New Hampshire’s current energy production is not a significant contributor to climate change. More than half of the state’s electricity is generated by nuclear energy, which is carbon-free. Nuclear fission is not without its environmental concerns, but, like wind and solar, it does not directly produce carbon dioxide or other greenhouse gasses responsible for climate change.

Other New England states have established goals for how much wattage they want out of the Gulf of Maine. Massachusetts, for example, has set a goal of 15 GW from offshore wind by 2050.

New Hampshire’s goals for offshore wind, as set forth in its current 10-year energy strategy, are more general, not tied to a specific amount. While it noted “great promise for offshore wind,” the strategy’s recommendations focused on costs and regulations, saying, “As technological improvements continue to reduce costs for offshore wind, New Hampshire should reduce unnecessary regulatory barriers that would hinder responsible wind development in the waters in the Gulf of Maine.”

The state’s electricity is tied into a New England wide grid managed by ISO New England Inc., which oversees the operation of New England’s bulk electric power system and transmission lines, generated and transmitted by its member utilities, such as Eversource.

“From where Eversource sits, using our local resource – offshore wind, which is close to our electric load – has got to be the major portion of how we’re going to keep the lights on for the next 20 years at least,” said Julia Bovey, Eversource’s director of external affairs for offshore wind.

Eversource has thus far signed six contracts for access to 1,760 megawatts of wind power and expects to invest up to $1 billion on projects off the coasts of New York and Connecticut.

For a smaller utility like Unitil, it’s about finding the right mix of power generation.

“We don’t have the kind of size or heft that a company like Eversource might have to make the kinds of bigger investments. But nonetheless, we have the same interests that they do. We want to see prices that make sense for customers in the creation and delivery of reasonably priced energy,” said Unitil senior counsel Matthew Fossum.

“Ultimately, Unitil is very interested in integrating a diversity of sources including offshore wind as it comes on. We’ll need to see a diversification of our energy mix,” he said.

The underlying theme of the summit was to make sure New Hampshire has a seat at the table as the decisions about offshore wind for this region are being made.

“At the end of the day, this is going to be happening in federal waters. So if you’re not at the table, talking about the interests of your stakeholders, you’re doing them a disservice,” said Mark Sanborn, NHDES assistant commissioner. “Our goal is to be at every possible table to make sure our interests are expressed, to make sure we know about the opportunities that are coming along the line, and to be able to communicate that to all of you.”

State Sen. David Watters, D-Dover, chair of the New Hampshire Commission to Study Offshore Wind and Port Development, cited pieces of legislation that help the state establish policy not only as an offshore wind energy consumer but as a part of its creation.

“What we’ve tried to do is to get New Hampshire ready. We established the offshore wind commission by legislation two years ago. It also set up the office of offshore wind in the Department of Business and Economic Affairs,” said Watters.

He underscored three points in his presentation – nonpartisanship, transparency and opportunity.

“What we really want to show is that in this state there’s going to be nonpartisan cooperation, that we’re going to have people build connections with the governor and commissioners and others. Also, we’re going to have transparency in the process here. People who want to make an investment here in the offshore wind industry they’re going to know who the players are,” said Watters. “Really the message is we are open for business in New Hampshire when it comes to offshore wind.”

While citing opportunities, some panelists also cited the challenges, including workforce availability, housing and day care for that workforce and the fact that doing business in New Hampshire is costly when it comes to energy.

“New Hampshire has a really vibrant, advanced manufacturing sector that has tremendous potential to continue to grow. But the one attribute to our state that continues to trouble that industry in our ability to continue to scale and grow is the cost of energy,” said Mike Skelton, president and CEO of the BIA. “I think our overall message is let’s find a way to do it, but do it quickly. Because the energy challenges that we’re facing are not going away. And they could get worse unfortunately.”