Businesses, municipalities continue to require them, but not all do 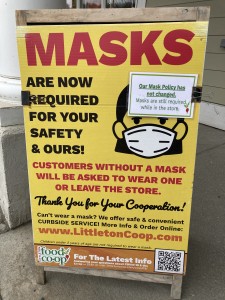 A sign outside the Littleton Co-op lets customers know the store’s mask policy. Some customers wondered if they still must wear a mask even though the state’s mask mandate is no longer in effect. (Photo by Rebecca Green)

The large yellow poster telling customers to wear a face mask remains in a prominent position outside the Littleton Food Co-op, but a small white card has been added, reiterating, “Our mask policy has not changed.”

“We have seen some people give us a little backlash because the state has dropped it, but most customers are pretty good about it,” Northrop said. “Two or three left the store.”

The idea of taking precautions to prevent the spread of Covid-19 is more than academic in Littleton. Over the last 14 days, there have been 53 new cases of the virus in the 5,800-person town on the northern edge of the White Mountains. Three workers at the co-op tested positive for the virus over the last week.

“We’ve had five total cases involving store workers in the last year,” Northrop said. “We don’t think it’s from the store. It’s what they do at home. We can’t tell them they can’t go to church, restaurants and things like that.”

Northrop said the store simply abides by the U.S. Centers for Disease Control and Prevention recommendations, which urge people to wear masks in public settings, at events and gatherings, and anywhere they will be around other people.

New Hampshire was the last state in New England to impose a mask mandate and the first to revoke it. The mandate required that people ages 5 or older wear masks in public, inside or outside, when they couldn’t consistently maintain six feet of separation from people outside their household.

In lifting the mandate, Sununu stressed the continued importance of social distancing and use of masks.

“That message will not change whatsoever,” he said. “What does change is the government’s imposed requirement to do so.”

Some Covid-19 mandates remain in force under the state’s “Safer at Home” guidance, which requires, for example, that employees who deal closely with the public wear a mask. Yet those requirements are set to be lifted on May 7 in favor of a set of suggested best practices.

Meanwhile, about a dozen towns and cities, including Portsmouth, Nashua, Plymouth, Concord and Manchester have their own mask mandates, and many businesses are expected to continue such requirements despite the lack of an overarching state mandate.

In Laconia, Bree Neal, who runs the Polished & Proper Barbershop, said barbers are regulated by a state board that may continue to mandate mask use.

If there is no requirement, Neal feels it should be up to the barbers and their customers to decide what to do.

“I would probably still wear a mask at all times,” she said.

However, she said that if regulations permit, she has no objections to others making their own decision.

“I believe everybody has a personal choice for what they want to do. You do whatever you’re comfortable with, and don’t put down those who disagree with you,” she said.

Donna Goodrich, president of Top Furniture in Gorham, has changed her signage to reflect that even though the state mandate has ended, her store continues to require masks.

“This is a non-negotiable item,” she said. “To be honest, in a year, we probably have had five customers who refused to wear one or were obstinate about it.”

She’s ready with an answer should a customer question why the store continues to require masks absent a state mandate.

“My answer is we are a private business and I have health-compromised staff and family members they take care of,” Goodrich said. “The CDC is my benchmark.”

Major chain stores such as Chipotle, CVS Pharmacy, Dollar General, Dunkin’, Home Depot, Kohl’s, and many others continue to outline mask requirements on their websites.

“The appeal to customers who come into restaurants is, ‘Please be patient,’” Somers said. “Different businesses approach this in different ways. If you are vehemently opposed to a mask, we ask for you to just put it on for the time it takes to walk to the table.”

It’s hard to predict when restaurants will be able to safely return to full capacity, but owners are looking forward to that day.

“It will take a year or two just to recover from the business losses caused by Covid,” Somers said.

Sununu said in an April 22 news conference that the transition from mandating to recommending mask use is “data-driven.”

“Frankly, when we’re telling that story, that’s a very important part of it. That fatality rate, down 95% – that’s a huge part of the story that has to be told,” he said. “The fact that vaccines are going up so rapidly, a huge part of the story, so folks know that we’re not just doing this on a whim or putting our finger up into the wind and hoping for the best. We’re really looking at all of these trends and those data markers as they come together.”

At the same news conference, Dr. Benjamin Chan, the state epidemiologist, said the one-day increase in new cases stood at 515, including 100 associated with the federal prison in Berlin.

He said there are 3,233 people with active infections, the test positivity rate was 4.5% and 112 people were hospitalized. He also reported one new death, bringing the statewide total to 1,274.

Enforcement of those requirements was largely an educational process that could involve a warning. Eight cases advanced to civil penalties ranging from $500 to $2,000. Such enforcement actions will be a thing of the past under the plan to change requirements to recommendations on May 7. Until then, some business requirements remain.

Edwards has also let confused callers know that businesses and municipalities will continue to have their own rules.

“There have been some people who hear what they want to hear,” she said. “There’s Covid fatigue. People would like not to be wearing masks.”