SELF fund to offer grants to state’s smallest business owners 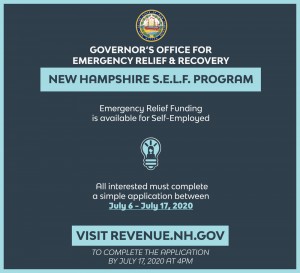 Just as a new program to help self-employed individuals goes live, the state has revealed that more than 12,500 New Hampshire business owners have received unemployment benefits during the pandemic – 15% of the total number of people on unemployment – and were collecting federally enhanced benefits totaling more than $10 million a week.

The New Hampshire Self Employed Livelihood Fund, or SELF, which is expected to provide up to $50,000 one-time grants to help self-employed people cover business losses due to the pandemic, went live today, July 6. Applications will be accepted through Friday, July 17.

The funding for SELF comes from the money left over from the state’s $400 million Main Street Relief Program. It is limited to businesses that are operating or that intend to reopen, and only to business owners who employ only themselves.

However, the definition of “self-employed” for unemployment benefits purposes is much wider. The category includes small independent contractors to owners of larger companies.

These business owners pay into the unemployment trust fund for their workers, not for themselves, so in the past they weren’t eligible to collect benefits for themselves. That changed because of the pandemic, first with Gov. Chris Sununu’s emergency order of March 16, and then under the federal CARES act on March 25.

According to data released July 2 by the Department of Employment Security, in the week ending June 20, 12,659 New Hampshire business owners had filed continuing claims out of a total of 85,994 total claims, or 14.7%.

The total has declined steadily from the 18,038 business owners who were collecting the week ending May 9. That total accounted for 15.7% of the claims filed, or more than one of every six.

Business owners are more likely to be eligible for the maximum weekly benefit than most workers $427, since state benefits are roughly based on 60 percent of income, plus federally enhanced $600 in benefits.

But even if all business owners only collected the minimum, that would amount to $9.7 million in unemployment benefits paid to them the week ending June 20. It would likely be higher.

The last enhanced check would be paid out the last week of July.