Total of over 30,000 connections expected through two rounds of awards 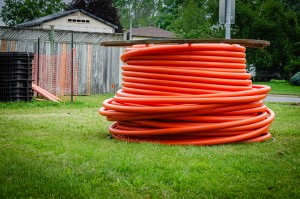 Fiberoptic cable at a construction site.

The Department of Business and Economic Affairs has launched a second round of funding aimed at bringing high-speed broadband service to unserved and under-served locations around New Hampshire.

A request for proposals will be issued on Sept. 30, the agency said. It comes on the heels of a review of applications in the first round, for which up to $50 million will be awarded. Under the second round no more than $40 million will be approved. The funding is being provided under the NH Broadband Contract Program.

“We have seen a very competitive first round, and we are confident that by moving to a second round, we will be able to see even more locations gain access to high-speed broadband across a wider geographic area,” said BEA Commissioner Taylor Caswell.

In a statement Gov. Chris Sununu said the new round of funding  from the two rounds combined will result in connections for more than 30,000 locations. He said more than 20,000 will be served through in Round 1 and another 15,000 expected for Round 2.

“It is clear there is more capability from internet service providers to get us closer to our goals of increasing access to high-speed internet across New Hampshire,” Caswell said.

As in the first round, the second round of awards will prioritize applicants that encourage the maximum number of locations to be served at the lowest cost and broadband networks that will be owned, operated by or affiliated with local governments, nonprofits and cooperatives.