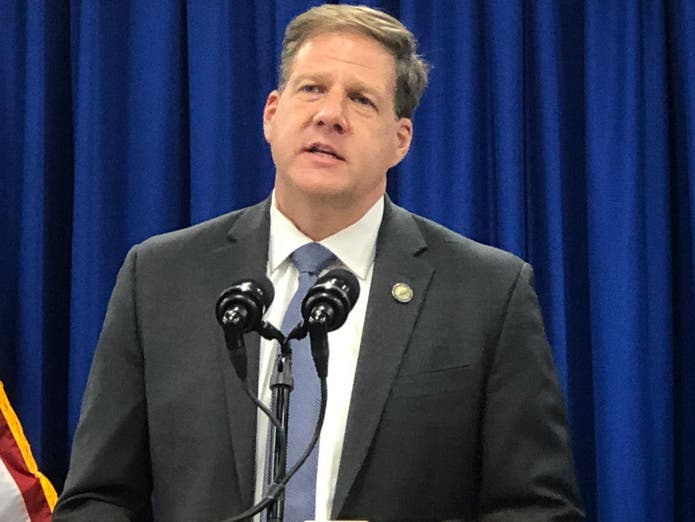 At his June 17 press conference, Gov. Chris Sununu announced details of how the state will recoup funds distributed to businesses through New Hampshire’s Main Street Program. (Photo by Paula Tracy/InDepthNH)

Starting this week, the state of New Hampshire will be sending out notifications to businesses detailing how much of their Main Street Program grant they have to pay back to the state, how they could get out of paying some of it or whether they will be off the hook and not owe anything.

At least half of the Granite State businesses that received the grants – those who owe less than $10,000 and those who didn’t do better than expected when it comes to revenue – will be off the hook.

But businesses that owe more than $10,000 or did better than expected during the pandemic will be told now much they owe, though they can apply to have Covid-related expenses subtracted from the total. They can apply for the adjustment starting Thursday, June 24.

The $500 million Main Street Program was designed for small businesses based on their expectations of how they would fare in the middle of the pandemic.

The Governor’s Office for Emergency Relief and Recovery, which administered the program, warned businesses they might have to repay the assistance received if their revenue loss ended up smaller than projected, but at the time it did not provide any details until Gov. Chris Sununu’s June 17 press conference.

At this point, no one knows how many businesses are off the hook.

When it comes to Self-Employed Livelihood Fund grants for the smallest businesses, since 4,572 out of 5,731 business received grants less than $10,000 will likely be able to keep the grant. And businesses that received larger grants but only did slightly better than expected will probably meet the threshold.

The same goes for the Main Street Program, though things are a little more complicated there since there were two rounds of grants.

Some 1,258 businesses of 5,259 businesses taking part got less than $10,000 in round one and 659 of 2,286 met the threshold in round two, but many businesses received help in both rounds. At deadline, the NHBR still couldn’t clarify whether the threshold applies to individual grants or the combined amount owed on several grants.

Businesses that owe more than $10,000 might lessen or eliminate their debt if they can show they have Covid-related expenses, but that raises a lot of questions GOFERR will be grappling over.

For instance, expenses include rent, utilities and mortgage payments that had to be made while the business was closed, though GOFERR hasn’t yet clarified how that would work for a business that partially closed, such as restaurants that could only do take-out or outdoor dining, or hotels that could only house essential workers.

Businesses could also count Covid-related reopening costs, but it’s not clear what exactly would count in that category. The list will be released when the program goes live on Thursday.

How much the state would recoup though all this is anybody’s guess. It won’t really know until after July 22, the deadline for submitting recoupment expenses.

GOFERR has about $150 million of the $1.25 billion the state originally received in CARES Act funds, according to its May report, but the actual total will be known in July, after the state closes out its fiscal year. And the state also will have about $1 billion through the American Rescue Plan. Much of that money will be distributed through the Legislature, the Legislative Fiscal Committee and the Executive Council and not GOFERR.