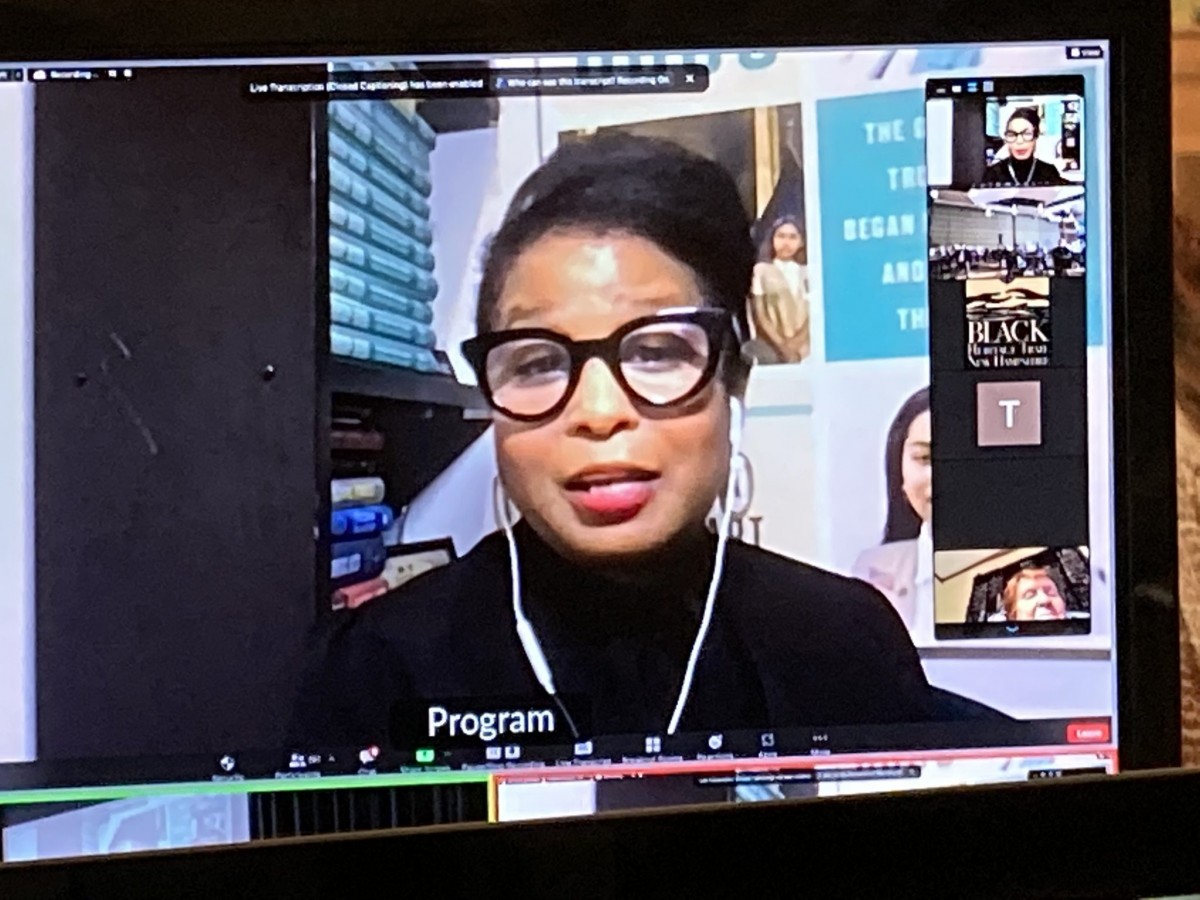 Nikita Stewart, an editor at The New York Times and contributor to The 1619 Project, was among who spoke during the event.

It’s been six months since the state passed the so-called “Freedom from Discrimination” law, and some educators say the new legislation has had a discouraging impact on the one classroom subject that needs the most support in New Hampshire right now: social studies.

The subject was at the forefront of a public dialogue session hosted Feb. 6 by the Black Heritage Trail of New Hampshire. The in-person and virtual event — “Divisive Concepts: A Chilling Effect on Teaching History” — brought in more than 350 audience members and featured three panelists, who said the law and other related legislation has made a bad situation worse.

“Social studies has been marginalized to an unbelievable degree in our schools, which I don’t think people really realize,” said panelist Elizabeth DuBrulle, director of Education and Public Programs at the NH Historical Society. “The irony of this is with all this hullabaloo over divisive concepts and social studies and critical race theory … social studies teachers today are being subjected to more scrutiny than ever before.”

While “high-stakes testing” in math, English, language arts and science ensures resources for those subjects, the state offers little support for educators who want to teach social studies, DuBrulle said.

She said the issue is compounded by the fact that New Hampshire does not require instruction in state and national history for grades K-7 — “anything before 8thgrade is optional.”

Since the passage of the “Freedom from Discrimination” law, DuBrulle said, an ongoing decline in social studies education has been exacerbated.

“It’s pretty tough times right now as a social studies teacher in New Hampshire,” panelist Erin Bakkom, a Portsmouth Middle School social studies educator, said. “I didn’t expect this 23 years into my career in the state, and I really hope there are shifts and changes as we move forward.”

Bakkom said the new law has made a negative impact on the comfortability of social studies educators who want to lead lessons on subjects such as systemic racism.

“I look at wanting as a teacher to have honest and open and truthful dialogues,” she said. “In New Hampshire, to have silence and fear in these conversations with kids — when have we ever seen fear work well for educating people on what the truth is?”

The law, which critics say puts a chill on important conversations about race and history in schools, was passed over the summer. It specifically prohibits schools or governmental agencies from teaching that an individual is racist, sexist or otherwise oppressive by virtue of their age, sex or any other identity — “whether consciously or unconsciously.”

The Legislature is currently considering a handful of bills that would enact changes to the law, from repealing it to expanding its reach to universities and colleges.

“These laws … reflect larger struggles over a recognition of the centrality of slavery and its aftermath on the very substance and history of our nation,” discussion moderator and state Sen. David Watters, a Dover Democrat, said. “In New Hampshire, aside from the current legislation, we need to understand the context of the decline in teaching of the history of our state and our nation as well.”

Watters is the primary sponsor of Senate Bill 298, which would repeal the “Freedom from Discrimination” law.

According to Watters, the law was originally modeled after former President Trump’s executive order that blocked federal agencies and other bodies from introducing certain “divisive concepts” in workplace training.

Since that order, 37 states, including New Hampshire, have introduced bills that would restrict how teachers can discuss racism and sexism in the classroom, according to an ongoing analysis by Education Weekly.

Panelist Nikita Stewart, a real estate editor at The New York Times, said she has seen the effect of this wave of legislation over time. Stewart contributed to “The 1619 project,” a Times initiative that “aims to reframe the country’s history by placing the consequences of slavery and the contributions of Black Americans at the very center of the United States’ national narrative.”

“In 2019 and 2020, I was meeting with teachers about how they could use The 1619 Project to enhance their lessons on enslavement, and now I’m talking to teachers about if they can actually use it at all,” Stewart said.

Stewart’s story for the project revolved around why slavery is mistaught in American schools, but she said Sunday that the question is morphing into why slavery isn’t being taught.

DuBrulle said that a Historical Society survey of teachers and administrators found that “there is almost no social studies in K-7 education in this state anymore.”

The survey was primarily to gather feedback on what materials educators need to start teaching state history and civics, which DuBrulle’s organization used to inform its new online social studies curriculum, “Moose on the Loose.”

The exceptions lie in wealthier districts, such as Portsmouth, Exeter and Bedford, DuBrulle added.

Despite these findings, DuBrulle said she has heard from people on all points of the political spectrum who are concerned about the decline in social studies education.

“Everyone is concerned. Everyone wants to do something about this, and I think we can if we all start working together,” she said.

The event was part of a weekly series put on by the Black Heritage Trail, Elinor Williams Hooker Tea Talks, which take place from 2 to 3:30 p.m. Sundays, in-person and over Zoom.

This article is being shared by partners in t5he Granite State News Collaborative as part of its race and equity project. For more information, visit collaborativenh.org.