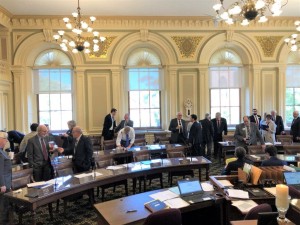 The NH Senate voted for a business tax cut Thursday but didn’t talk about it much. Instead, senators mainly treated House Bill 1221 as a vehicle to attach a one-time infusion of surplus funds to municipalities to help them make retirement payments, with the intention of alleviating property tax bills.

Even that wasn’t debated, and the measure was passed unanimously. What was debated was the insertion of language to blame the Biden administration for inflation and to credit themselves for lowering taxes in the past, as well as the Democratic leader, Rep. Renny Cushing of Hampton, for coming up with the idea of the state reinstating retirement funding – thought Cushing’s idea was to resume the payments on an ongoing basis, as they were before the state abandoned them in 2011.

Indeed, one of the few mentions of the proposed cut in the business profits tax rate from 7.6 percent to 7.5 percent came from Sen. Tom Sherman, D-Rye, an announced candidate for Governor, who voted, along with the rest of the Democrats, against it.

HB 1221, when it was originally introduced in the House would have benefited most businesses, since it then included a cut in the rate of the business enterprise tax, which most businesses – usually on the smaller side – tend to pay.

Lawmakers had been cutting both taxes in tandem since 2016. But the BET cut would cost the state about $27 million a year, while the BPT cut would cost $8.5 million. So the House just cut the BPT rate. Whether it would mainly benefit out-of-state corporations depends on how you look at it. The vast majority of BPT taxpayers are domestic, but the vast majority of the revenue from the BPT comes from a relative handful of out-of-state corporations.

In the end, the Senate approved a measure, which says the state “shall pay to each municipality an amount equal to 7.5 percent of both the normal and accrued liability contributions of each municipality for benefits under the retirement system.” There was no fiscal note to see how much this would cost, but the bill stated that the intention is it should go to relieve property taxes, though there is no guarantee that it will. This is important to businesses as well, since they pay roughly the same amount in property taxes as they do in businesses taxes.

This was something that Cushing – who died in March after a long battle with cancer – had been pushing for years. But while Senate Democrats supported the one-time retirement payment they couldn’t abide with was legislative finding, which describes what the intent of the bill is.

It reads: “New Hampshire’s working families and small businesses are struggling with a 40-year high inflation rate that has had a devastating impact on the price of gasoline, home heating, and food resulting from policies adopted in Washington, D.C. since January 2021,” which happens to be when the Biden administration took office. Democrats wanted that clause separated out, along with the tax cut. Neither happened.

The next step for HB 1221 will be to the Finance Committee, which will scrutinize how much the retirement payment will cost – and perhaps whether it can afford to throw in a BET tax cut after all.