NH restaurants prepare to reopen for outdoor dining starting May 18 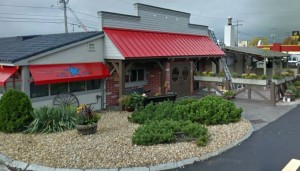 Cactus Jack’s is one of nine restaurants operated by Great NH Restaurants that will be opening with outdoor seating. (Courtesy photo)

Restaurants across the state are gearing up to open outdoor dining areas on May 18 amid growing concern of how to ensure the public and staff’s safety and whether there will be enough customers to make it financially viable.

Tom Boucher, CEO-owner of Bedford-based Great NH Restaurants Inc., said he plans to open outdoor dining at all nine of his restaurants which include T-Bones, CJ’s, Cactus Jack’s and the Copper Door located in Manchester, Bedford, Derry, Nashua and Salem.

Only one, T-Bones in Salem, doesn’t have a patio, so the plan is to rent a tent, tables and chairs and set up a site in the parking lot.

All of the other restaurants, he said, also will feature tent dining in parking lots to expand seating capacity.

At The Copper Door in Bedford, he said the existing outdoor area will be able to seat 24 while there should be about 50 seats under the tent, all with appropriate distancing.

Asked if the new outdoor dining would be financially viable for his business, Boucher said, “No, it’s not. Quite frankly, we have been losing money every single week this has been happening, quite a substantial amount of money – $100,000 a week.”

They have reserves, but he said it is not unlimited.

“We can’t continue at this pace for many more weeks,” he said.

It’s nearly eight weeks since Gov. Chris Sununu ordered restaurants to close so the loss for his company is about $800,000.

“That’s just unsustainable,” he said. “Now, will this help stop the bleeding? I think it will help, but keep in mind the kind of weather we have.”

Late May to mid-June, he said, is not exactly when it is the nicest weather in New Hampshire. “It’s usually showery and it can be chilly,” he said. “That’s going to be a big challenge for us.”

Since the shutdown, all nine restaurants are doing curbside and takeout.

When it comes to opening outdoor dining, Boucher said it is not a case of just putting up a tent and setting up tables and chairs.

“There are layers and layers of details. It’s like opening a new concept,” he said.

Various inspections and different requirements are needed, depending on the restaurant’s locations. He said some towns are very flexible; others want an entire fire inspection; some want barriers to prevent cars from driving into the tents.

“We haven’t run into a roadblock yet,” he said.

One major change is that there will not be a full bar. “It is hard to bring in a bartender and open a full bar,” he said.

There will be a pared-down alcohol menu and four flavors of draft beers.

“What we really tried to do is operate under the most normal conditions, things that we used to do and what we are good at,” Boucher said.

That means there still will be glasses, plates and regular utensils.

“We’ll mix your martini out under the tent,” he said.

It will be a challenge for waitstaff, said Bucher.

At The Copper Door, for instance, they will have to walk through the dining room, through the bar and out to the parking lot. It’s a long distance for staff and they’ll have to wear face masks, Boucher said.

“When I go out to eat I enjoy the food, the atmosphere and the warm smiles of the staff who now are going to be behind these masks,” he said. “That’s a little concerning for me because it’s not the experience we want to share with our guests. But it is what it is, and we are going to follow the mandated guidance.”

Johnny Paolini, owner of Piccola’s on Elm Street in Manchester also plans to open outdoor seating, something he usually does from April through October. However, he said he plans to ask neighboring businesses if he can use some of their space because of the distancing requirement.

“We don’t have a big front of the restaurant,” he said. “I’m happy that we’re able to do it, but we’re not fortunate like other places that have areas in the back of their restaurants. We just have to deal with what we have and hope for the best.”

He is currently doing takeout Wednesday through Sunday. “It’s as good as it can be,” he said of the number of customers placing orders. “Whatever I take in for takeout I use to buy food for the next week. You can’t survive on it, for sure. It’s just tough.”

On his block, there are two other restaurants – XO Bistro and the Thirsty Moose.

“I’m sure every restaurant and bar are going to be putting tables out,” he said. “I’m sure of that.”

This week, all of 110 Grill’s New Hampshire locations opened for takeout and curbside pickup, said Alicia Puputtti, director of marketing. The Massachusetts-based chain has restaurants in Manchester, Nashua, Rochester, Stratham and West Lebanon.

“We are planning to open the patios of all of our New Hampshire locations for outdoor dining on May 18,” she said. “The safety of our guests and team members is our priority and we will be taking the necessary precautions.”

Mike Somers, president and CEO of the New Hampshire Lodging and Restaurant Association, said there are about 2,500 restaurants operating year-round in New Hampshire with an additional 400 in the summer. 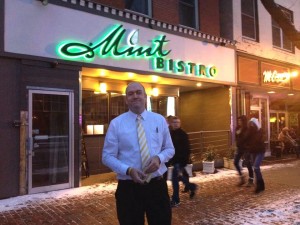 Tim Baines, owner of Mint Bistro on Elm Street in Manchester, is preparing to open for take-out only starting next week. (Courtesy photo)

A lot of the restaurants do not have the ability to do outdoor dining because of their limited space and the many restrictions.

“It’s really going to be driven by location and what they have for space,” he said.

Restaurant owners also have to contend with health and licensing inspections.

“Some health inspectors understand the plight of our industry and are trying to work with those businesses,” he said. “And there are others that are adamantly opposed to any change and actively working against restaurants opening at all.”

He declined to say where that was happening.

Manchester had a meeting among its departments – police, fire, planning – to put together proposals to ensure everyone is following the same protocols.

Phil Alexakos, public health administrator for the Manchester Health Department, said the city requires permits for outdoor dining while the State Liquor Commission has restrictions on serving alcohol outdoors. He said, however, it is his understanding that during the Covid-19 outbreak a restaurant need only email the SLC saying what they planned to do to get approved.

The fire department also conducts an inspection anytime someone wants to put up a tent. An assembly permit also is needed if a restaurant is going to use a sidewalk.

“It’s not just ‘do this and you’re good to go’,” he said. “We have to figure out how it’s going to work. Businesses have to figure out X amount of seats outside and does it work economically. You have to staff it so some may stick to takeout for a certain period of time. That’s a business decision.”

Brian Lockard, health officer in Salem, said the town is complying with the governor’s guidelines for outdoor dining to ensure it is done safely.

He said a number of Salem’s restaurants have outdoor dining or patios and, as long as they follow the guidance, they can do it.

“If somebody is adding something new, we are requesting they contact us,” he said. “We’ve seen some proposals where they want to put tents up in parking lots so we want to make sure that is done safely.”

Salem has more than 200 foodservice businesses including restaurants, supermarkets and school cafeterias.

Since Salem borders Massachusetts, he said, there is concern there will be an influx of out-of-staters, but he said, “these are limited operations so again it needs to be done safely and done in such a fashion that people are social distancing – six-feet apart – with the recommendation that customers may have to wear masks while waiting in line.”

He said staff also may be wearing masks to bring patrons their food or there could be an alternative drop-off spot with customers picking the order up themselves.

“It’s all new to everybody,” he said. “This is the first phase and the hope is to open limited indoor dining. We don’t know when. We just take our orders from the governor and see.”

Last week, the state held a virtual meeting with all inspectors – state, cities and towns – during which they discussed their concerns to ensure “we all do this safely,” said Lockard.

The partial opening of restaurants comes at a time when many restaurant owners are desperate, said Somers. “This is a very small margin industry – 3 to 5% profit margin,” he said. “You have essentially three months ripped away, including May which usually have weddings, graduations and a whole variety of other things. When you take that out of the mix many right now are on life support. A very small percentage of them got PPP (Paycheck Protection Program) money and many didn’t get any money at all.”

For many, he said, “it is more a case of survival at this point,” Somers said. “They are just trying to keep their businesses afloat to try to get through this. It may take a long time.”

Then there is the uncertainty about whether people will go out to dinner because they fear they will contract Covid-19.

“We just don’t know what the demand is going to be so it’s going to be a slow ramp-up over many months,” he said. “Honestly, we don’t know. The longer this goes we’ll have higher and higher attrition of restaurants and even some lodging facilities are going to close or go out of business because they just couldn’t hang on.”

Tim Baines, who operates Mint Bistro, has been closed since the governor’s initial “stay home” order. He has spent the past few months on indoor renovations.

According to a post on Facebook last week, Baines plans to reopen May 20 for takeout only Wednesday through Sunday from 4 to 9 p.m. with a limited menu. He anticipates reopening his restaurant for indoor seating on June 2 based on the governor’s current phase-in plan.

“We will adhere to any new restrictions set forth. We do not know specifically at this time what those will be, but we can assure you that Mint will be the same great place that we have proudly operated in downtown Manchester for almost nine years,” Baines wrote.

Paolini is excited but also nervous at the prospect of returning to indoor dining in June.

“I want to open up and bring everybody back but we need customers,” he said. “Right now, I’m doing all the cooking and I wash the dishes as well and do the packaging.”

But if indoor dining returns on June 1, he needs enough customers to meet payroll. June will be the test month he said. July and August, he said, is the time of year when people go to their lake houses or to the beach.

“We’re going to see this year what the attitude of the public will be. Will they be afraid to travel? I’m telling you the uncertainty will turn you upside down. It’s just so scary,” he said.

Paolini’s a little weary but wants to see people walking up and down Elm Street once again.

“I think everyone wants just a little sense of normalcy,” he said.