Employers can sign up starting Dec. 1 for voluntary state program 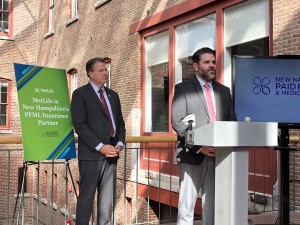 Gov. Chris Sununu kicked off the campaign for the NH Voluntary Paid Family & Medical Leave plan on Wednesday, a month before businesses will be able to sign up and be eligible for a tax break.

“This is the culmination of an idea that some said could not happen,” he said, noting all other plans around the country (including one he vetoed in New Hampshire) are universal and mandatory, whereas New Hampshire will be completely voluntary. It won’t cover everybody, but Sununu said he wanted to get as many people to sign up as possible.

“This is nothing off-the-shelf,” he said. “It had to be designed. Paid family leave has been around, but nothing like this.”

The program, anchored by a pool of more than 10,000 state employees, will provide 60 percent of an employee’s income to take care of themselves or a family member for six weeks.

The major sales pitch was reserved for private businesses, which can sign up starting Dec. 1, so the governor brough on Mike Skelton, president of the Business & Industry Association.
“This is a tool in the toolbox to attract and retain talent,” Skelton said, adding that “everybody knows the ability to attract workforce is the number one issue for business, and it doesn’t matter what industry.”

He said that, while larger businesses may already offer a similar benefit, most medium and small businesses can’t. The new program is “a turnkey solution” for them.

It is also a relatively inexpensive one – a selling point that wasn’t mentioned by any of the participants, including the representatives of MetLife, the state’s vendor. When asked, Deputy Insurance Commissioner D.J. Bettencourt he didn’t give out any numbers, but talked about underwriting and specific quotes and prices upon request.

While the rates vary widely depending on a host of factors, including the size of workforce, its age and the amount of coverage, they averaged at $27.67 a month per employee, according to the MetLife filing. Throw in a 50 percent tax rebate on the business enterprise tax, and that comes out to $13.22.

Companies can share that cost with employees (though they only get a tax break on what they pay) or employees can sign up for coverage on their own if their employer doesn’t participate Their prices may vary too, depending on the individual, but that is capped at $5 a month. (Individual signup don’t begin until January, since they can’t sign up on their own, if their company already has.)

Employers may not like the paperwork, but if they have more than 50 workers and some of their workers sign up, they’ll get some anyway. They still have to deduct and submit their premiums, and hold the job open if an employee exercises the benefit and takes leave. All business have to cooperate with the state when it comes to accessing claims.

Employers can learn about all this and more at the state’s website, which also lists a number of webinars, planned for Nov,. 7, 9 and 10. Hearings for brokers began Wednesday, Nov. 2, and will continue on Nov. 3 and 4. The state’s paid family leave plan website also features two introductory webinars that were recorded in September. They attracted some 345 insurance brokers and benefit consultants and 891 employers, Cassie Keane, deputy Administrative Services commissioner told NH Business Review.

But while getting the basics in a recorded webinar helps, it is even more important to ask specific questions affected your business, said Keane. For instance, the program can often be tailored to fit in with an existing disability program.

Of course, less a thousand employers is a small fraction of the state’s business owners, but both Skelton and Administrative Services Commissioner Charlie Arlinghaus said that interest is high.

“People are starting to dip their toe in the water before they take their first step,” Arlinghaus told NH Business Review.