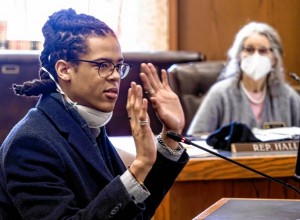 Jonah Wheeler of Peterborough spoke out against House Bill 1255, the ‘teacher loyalty’ bill, at a Jan. 20 hearing on the measure. (Geoff Forester/Concord Monitor)

The so-called “Freedom from Discrimination Law” that opponents say puts a chill on important conversations about race in schools and public institutions has been on the books for half a year, but New Hampshire lawmakers are far from finished with the legislation.

State representatives are considering a handful of bills that would enact changes to the law, from repealing it to expanding its reach to universities and colleges. The law specifically prohibits schools or governmental agencies from teaching that an individual is racist, sexist or otherwise oppressive by virtue of their age, sex or any other identity — “whether consciously or unconsciously.”

The new wave of legislation comes on the heels of two pending lawsuits over the original law, claiming that it is unconstitutionally vague and violates freedom of speech. Plaintiffs include the state’s two largest teachers’ unions.

Supporters of the bill say the changes will strengthen New Hampshire’s race relations and protect everyone — including white people — from discrimination in schools and public workplaces.

Below are seven bills to keep an eye on this session. Each of the pieces of legislation have been assigned to a committee. If any of them pass, they will move to the House or Senate floor for a full vote.

Four bills this session seek to repeal the “Freedom from Discrimination” law.

Sponsored by Rep. Manny Espitia, D-Nashua, and Sen. David Watters, D-Dover, respectively, House Bill 1576 and Senate Bill 298 would each strike the law from the books.

Meanwhile, HB 1090 and SB 304 would also repeal the legislation — with the added provision that “no education law of this state shall be construed to bar any school employee from teaching the historical or current experiences of any group that is protected from discrimination.”

SB 304 has one provision that HB 1090 does not, adding protections for public employers who engage in or require “any form of training concerning the historical or current experiences of any group that is protected from discrimination.”

The sponsor of HB 1090, Newmarket Democrat Rep. Charlotte DiLorenzo, said in addition to repealing the law, she thinks it’s important to ensure that no New Hampshire bill is able to block students from receiving an accurate education about the past.

“Students deserve an honest education that enables them to learn from the mistakes of the past to help create a better future for our state and our country,” she said. “(The current law) only shortchanges our children from developing the tools they need to be successful.”

DiLorenzo said she feels particularly concerned that topics related to systemic racism are discouraged from being taught in the classroom, and her bill would safeguard those topics.

“A lot of people deny systemic racism, but I see it loud and clear, from the founding of this country right up until today. I know that enslavement and the proceeds from enslavement were part of this country’s foundation,” she said. “When we fast-forward to what’s happened in the past two or three years with the murder of George Floyd and Ahmaud Arbery and Breonna Taylor, all of those things have come to light for the entire world to see.”

Charlestown Republican Rep. Steven Smith said, as a general rule, he believes immediate repeals are a bad idea, especially with legislation as complex as the “Freedom from Discrimination” law.

Smith added that the law prevents New Hampshire educators and employers from teaching that people should have an opinion about another group of people simply because of who they are.

“How does racism manifest? You choose a group of people, and assign characteristics to them, and then say all members of ‘demographic A’ are lazy, dishonest. That’s the real despicable part of racism. Isn’t it the same thing if I say all white people are racist? Because that’s clearly not true. That’s that thing the (law) seeks to address,” he said.

Smith said that while the issue is not present in New Hampshire’s education system as a whole, “having it happen once is just unacceptable.”

“(Teachers) shouldn’t be using a class as a form of a way to promulgate their particular point of view. They should be providing information, letting the kids make their own choices,” Smith said.

Brian Hawkins, director of government relations at NEA-NH, said feedback from educators who either self-censored or curtailed their classroom discussions because of the current law helped inform the pending legislation.

“For public school educators, there’s very high stakes in this law,” he said. “The vagueness of it coupled with the potential penalties for it just makes it completely unworkable, and that goes to the need to repeal it.”

The Attorney General’s Office, along with the Department of Education and the Commission for Human Rights, released guidance on the law last July, but Hawkins said it did not curb confusion and concern among educators.

Hawkins added that a lot of that concern stems from the genesis of the law, which was originally modeled after former President Trump’s executive order that blocked federal agencies and other bodies from introducing certain “divisive concepts” in workplace training.

“In its final version, the law kept at least four of these banned concepts that we saw on the original Trump executive order,” Hawkins said. “Those two pieces — the banned concepts components as well as its vagueness, and then followed by the potential consequences for educators trying to follow that vague guidance — don’t really make it an anti-discrimination law.”

House Bill 1255, “relative to teachers’ loyalty,” would prohibit New Hampshire public school teachers from advocating for any “negative account or representation of the founding and history of the U.S.” The legislation specifically includes the idea that the country was founded on racism.

The legislation, which updates a Cold War era law that bans educators from advocating for communism in schools, would also ban advocating for socialism, Marxism and “any other doctrine or theory which includes the overthrow by force of the government of the U.S.”

“Hopefully it’s rare, but it definitely is happening in our state — teachers who are not educating but indoctrinating. I see that as very harmful to students,” bill sponsor Rep. Alicia Lekas, R-Hudson, said at the bill’s Jan. 20 hearing.

Lekas added that she read letters from and talked personally with parents who said their children are being indoctrinated, but declined to name any specific schools.

Opponents say Lekas’ bill would add to the confusion that the “Freedom from Discrimination” law currently poses to teachers.

“It will still have that chilling effect and make it almost impossible for teachers to understand what they can permissibly teach in the classroom,” said Deb Howes, president of the American Federation of Teachers New Hampshire, at the hearing. “The problem with saying you don’t want indoctrination, is indoctrination is in the eye of the beholder. It is a very subjective term … and frankly that’s the big problem with the ‘divisive concepts’ law from last year. It’s so vague that there’s a lawsuit over it.”

The “Freedom from Discrimination” law is currently limited to K-12 public educational programs. At colleges, universities and other post-secondary education institutions, the law applies for staff and volunteer training — but not for teaching students.

HB 1313 would expand the legislation’s reach to include public post-secondary educational programs, such as at the University System of New Hampshire and other public colleges.

Bill sponsor Rick Ladd, a Haverhill Republican, said at the Jan. 11 hearing on the bill earlier this month that the legislation was created to prohibit discrimination in higher education.

“One should not convey to any individual that his or her color, creed or other defining characteristics is inherently racist, sexist or oppressive, whether consciously or unconsciously,” Ladd said. “Any instructor aligning and communicating one’s own vision of race relations with a national narrative that uses diversity and inclusion as its platform is unacceptable.”

Devon Chaffee, executive director of the American Civil Liberties Union of New Hampshire, said at the hearing, the bill may violate the U.S. Constitution. ACLU-NH, along with a handful of advocacy groups, law firms and educators, filed a federal lawsuit in December challenging the current law.

“(The bill) is in fact a violation of longstanding Supreme Court precedent going back over 60 years protecting academic freedom,” Chaffee said. “More recently, the Supreme Court has made clear that, particularly in the university setting — exactly what HB 1313 is trying to target — it is unquestionable that viewpoint-based suppression of speech is impermissible.”

HB 1638 – also sponsored by DiLorenzo – would change the process for complaints filed against educators under the “Freedom from Discrimination” law.

The law currently empowers people with complaints to “initiate a civil action against a school or school district in superior court for legal or equitable relief, or with the New Hampshire commission for human rights.”

HB 1638 would instead send complaints to the local school superintendent, who would conduct an “impartial investigation” and have 15 days from receiving the complaint to issue a decision on whether the law was violated.

“When I read about the complaint process, I thought it was kind of bogus because all the complainants need to do with the complaint form is fill in the blanks, sign their name and date it,” DiLorenzo said. “I feel like there should be some sort of structure to authenticate what the person is saying, and it’s a warning about making false statements because there can be many, many mistakes in an open process like this, and there will be.”

Under DiLorenzo’s bill, if the complainant disagrees with the superintendent’s decision, they may appeal to the Department of Education. If the department also rejects the decision, the department may refer the case to the state Commission for Human Rights or the New Hampshire Attorney General’s Office.

“I think it sounds fair that an educator would be able to first have a dialogue with the district superintendent,” she said.

This article is being shared by partners in the Granite State News Collaborative as part of its race and equity project. For more information, visit collaborativenh.org.