Study: NH is the safest state to work 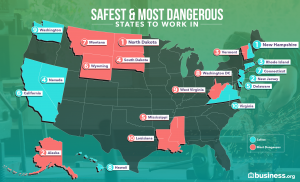 New Hampshire is the safest state to work in, according to a recently released analysis Business.org.

The website, which looked at 2017 data measuring the increase in fata and nonfatal accidents in the U.S., found that there were 11 work-related fatalities in New Hampshire – a 50% drop form 2016, when there were 22. The total gave New Hampshire a score of 98.9 out of 100 – the highest mark earned by any state.

To come up with the score, Business.org analyzed data from the U.S. Bureau of Labor Statistics measuring the number of fatal workplace injuries per 100,000 residents who are 18 and older. It also factored in the percentage change from 2016 to 2017. Each measurement was normalized on a scale from 0 to 1, with 1 indicating a positive score and 0 negatively impacting the final score.