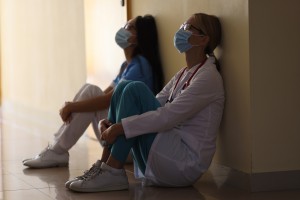 The predictions from a handful of health care workers and the governor have been loud, dire, and frequent: Health care facilities mandating Covid-19 vaccines for staff will see their workers leave in droves.

St. Joseph Hospital in Nashua, which mandated vaccination by Nov. 12 for its 1,500 workers, is at 100 percent compliance, said spokesman Timothy McMahon. The same is true among the 2,500 workers at Genesis HealthCare’s long-term care sites in New Hampshire, said spokeswoman Lori Mayer.

Ninety-nine percent of Dartmouth-Hitchcock Health’s 13,000 workers met their mandate deadline, said spokeswoman Audra Burns. Wentworth-Douglas is at 98.3 percent compliance for its more than 3,000 workers, spokesman Adam Bagni said. Concord Hospital reached 99.7 percent compliance among its 4,500 workers, according to its spokesman, Matthew Johnson. Lauren Collins-Cline, spokeswoman for Catholic Medical Center, said 94 percent of 2,700 to 2,800 workers are vaccinated but that the hospital has pushed its deadline to Jan. 14 to allow more time to verify staff vaccination status and better understand a recent halt on the federal vaccine mandate.

And Elson Munson, president of the New Hampshire Association of Residential Care Homes, said he knows there was fear a mandate would decimate the workforce, but he hasn’t seen it. “I’m not surprised that people anticipate this and fear it, but it hasn’t been proven,” he said.

That’s not to say there isn’t a serious staffing shortage of health care workers in New Hampshire.

Job ads and sign-on bonuses have been everywhere for months. Health and Human Services recently announced it will spend $6 million in federal money recruiting health care workers from out of state to ease overcrowding in the state’s hospitals.

While a federal court has temporarily set aside the Biden administration’s vaccine mandate for employees of health care facilities that take Medicaid and Medicare, mandates can remain in place at hospitals and facilities that adopt them on their own.

‘Maybe now is the time’

Vaccine mandates aren’t the culprit to blame, health care leaders say. The pandemic exacerbated an existing worker shortage, they said. Battling a deadly virus for 21 months has taken its toll on health care workers, especially given that less than 65 percent of the population has sought a vaccine.

“I think there are a lot of people leaving health care,” said McMahon at St. Joseph Hospital. “But I think they are leaving for various reasons. I think we are seeing a ton of burnout among our nursing staff and our providers. And people who were close to retirement are saying, ‘Maybe now is the time.’”

Munson agreed and pointed to the early pandemic shutdowns, well before vaccine mandates, when more people than ever became eligible for generous state and federal unemployment benefits. After having to step away from their jobs, many decided to do so for good or take much better paying jobs as travel nurses.

Gov. Chris Sununu has said he supports the right of private businesses to make vaccine mandate decisions but opposes a federal mandate. He applauded Attorney General John Formella’s decision to join eight other states that challenged the federal mandate.

A day after the court halted the mandate, Sununu called the decision a big win for health care employers in the state.

“What we have heard over the past couple of weeks is from nursing homes calling my office directly and letting us know that they are at risk of closing because of this mandate,” Sununu said. “We want everyone to get vaccinated. Don’t make any mistake about it. We want folks to make that choice. But if the vaccine mandate risks closing our nursing homes, it is a bad idea.”

He continued, “We’re already so short-staffed with health care workers. We need every single one.”

Matt Lagos, administrator of the Merrimack County Nursing Home in Boscawen, agrees with that last part. Just over 97 percent of staff met the home’s Oct. 2 vaccination deadline, he said, but losing even 3 percent of workers did create a challenge.

“We have had to consolidate units and reduce our census expectations to ensure quality care for the residents, much like many of the homes across the nation,” he said. “We are certainly mindful of the stress that this puts on the entire health care system and the residents and their families who are waiting to come in.”

Shelley Richardson, administrator of the Belknap County Nursing Home in Laconia, which does not have its own mandate, said 18 of her 90 staff members were not vaccinated when the federal mandate was halted. Before that news came, she was so fearful they’d leave rather than be vaccinated, she had made plans to transfer some of her residents to homes with more staff. “It was a relief,” she said.

Statewide, nursing homes, not all of which have mandates, are reporting nearly a 90 percent vaccination rate among staff, said Brendan Williams, president and CEO of New Hampshire Health Care Association. It’s lower in some parts of the state where the overall vaccination resistance is higher.

“For some facilities, it would be a real hardship,” Williams said. “However, to lose any resident to an avoidable Covid-19 death is also a hardship.”

The organization is encouraging staff to be vaccinated and favors the mandate but is not “fighting” for it. It is waging a different vaccine fight: proposed legislation that would prohibit private businesses from adopting a vaccine mandate.