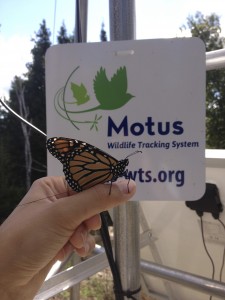 A nearly $1 million grant from the U.S. Fish and Wildlife Service has been awarded to a New England research partnership to dramatically expand a new migration tracking system across New England. The New Hampshire Fish and Game Department is the lead agency for this collaborative project.

The receivers can track movements of birds, bats and large insects tagged with radio transmitters called nanotags. The receiver array will be part of the Motus Wildlife Tracking System (motus.org), established in 2013 by Bird Studies Canada. The Motus network currently includes nearly 900 receiving stations around the world.

Together, the combination of highly miniaturized transmitters – some weighing just 1/200th of an ounce – and the global receiver array enables scientists to track migrants previously too small and delicate to tag with traditional transmitters. The technology is seen as revolutionizing migration research by documenting the travels of individual birds, such as a gray-cheeked thrush that was tracked on a 46-hour, 2,200-mile nonstop flight from Colombia to Ontario.

For example, New Hampshire Audubon biologists will use the smallest nanotags to track fall movements of monarch butterflies, which have suffered large population declines. The tracking information will help to identify target areas for habitat improvement, such as planting fall-blooming nectar sources to support migrating monarchs.

While the grant focuses on a few target species, the receiver network has broader implications. Any nanotagged animal that flies within nine or 10 miles of any of the receivers will be automatically documented. In 2109, for instance, a receiving station installed in Dixville, NH, to monitor rusty blackbird activity detected several shorebirds migrating from Churchill, Manitoba, and James Bay, Ontario, to the Atlantic coast.