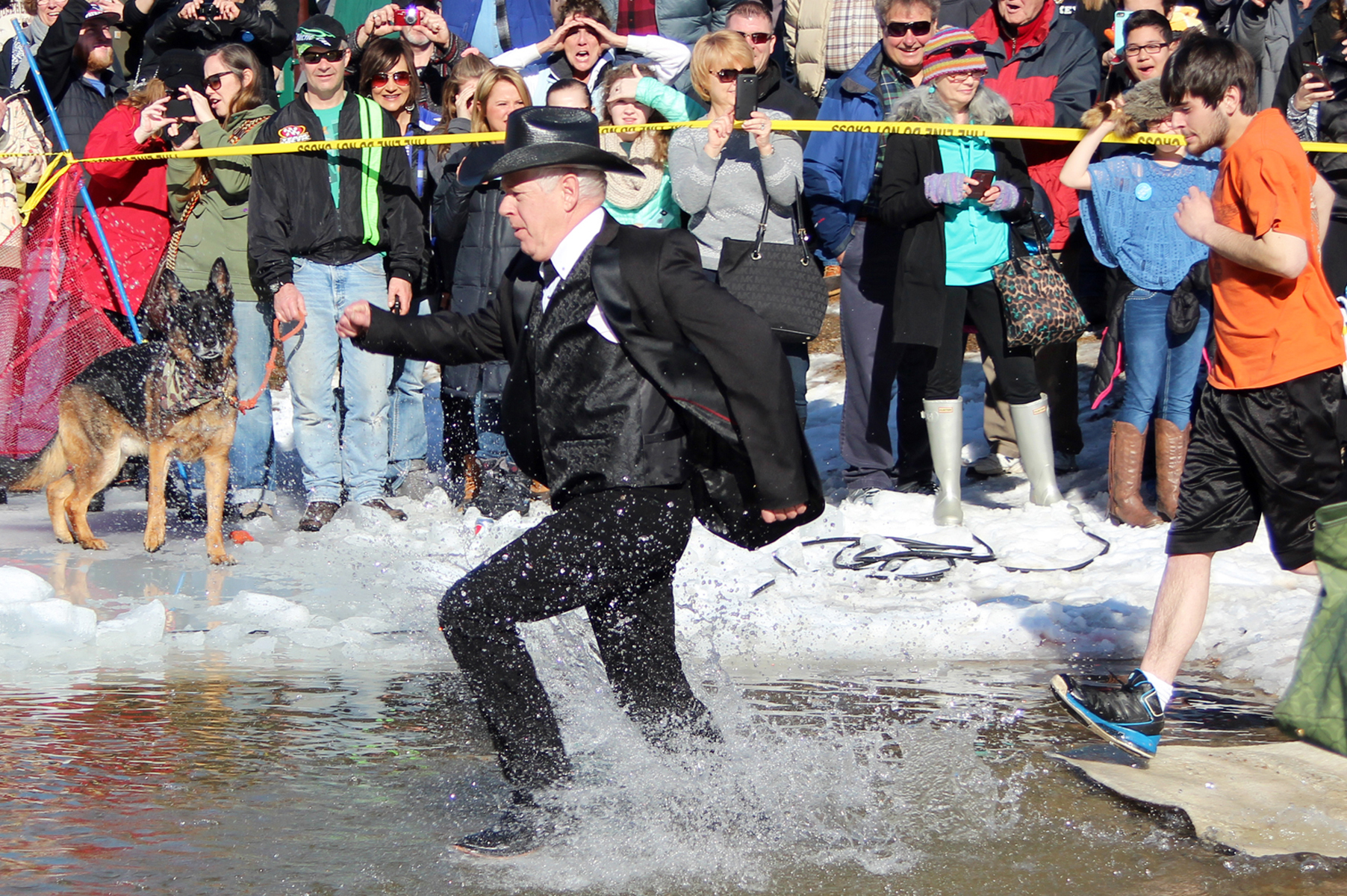 The Gibson Center for Senior Services in North Conway is leading an effort to make the region more age-friendly. That includes promoting the vitality and contribution of older Granite Staters. Here Del Bean participates in ‘Freezing for a Reason’ to raise money for a local animal shelter. (Courtesy Lisa DuFault/Valley Promotions)

This summer, the town of Newport intends to turn a vacant lot into a $60,000 dog park and community garden. Goffstown launched a road show to teach residents how to reduce housing costs with a recent state law allowing second homes on their property. Dover is improving walking routes to public transportation.

If communities need incentives, those experts have two:

Second, today’s retirees, who are living longer, are particularly valuable because they have the professional experience and free time needed for community efforts, and the money to spend in local restaurants and stores.

“The baby boom generation is the healthiest and wealthiest generation ever to walk on the face of the earth. There’s simply no contest,” William Beach, commissioner of the U.S. Bureau of Labor Statistics, told journalists at a September fellowship hosted by AARP. “We got transfers from our parents of almost $25 trillion. We are set to transfer to our children … somewhere close to $60 trillion in assets. So we have more wealth. We have more income. We are healthier. We are more educated than any generation ever to achieve the median age of 70. Ever.”

The World Health Organization introduced the concept of “age-friendly” or “livable communities” in 2006 to promote healthy aging and to encourage communities to prioritize a goal of becoming a safe and welcoming place to grow older.

Six years later, AARP launched a national effort to help communities improve their “livability score.” The assistance includes a tool kit to identify age-friendly projects and, in some cases, the money to execute them. AARP New Hampshire brought the initiative here in 2018, and has since designated 19 communities as age-friendly and funded 18 of projects.

Advancing age-friendly policies has also been a priority of the NH Commission on Aging, established in 2019 to advise the governor and lawmakers on age policies and planning, and the NH Alliance for Healthy Aging. In its 2022 annual report, the commission said transportation and safe affordable housing have been top concerns for older residents. The state’s plan on aging, developed in 2019, also highlights the number of isolated adults in New Hampshire and the connection between their isolation and their physical and mental health. In a survey completed in 2019, nearly 45 percent of adults over 75 said they lived alone, while about 27 percent of adults under 75 reported the same.

The age-friendly initiatives funded by AARP New Hampshire are intended to address the eight domains of livability deemed critical to being age-friendly. They include transportation; housing; access to outdoor spaces; social inclusion; civic engagement; health services and supports; and communication. While they share a common goals, cities and towns are pursuing those domains in different ways.

Several communities are teaching residents how to use standalone second homes on a single lot, called accessory dwelling units, as a more affordable way to age in place. In North Conway, the Gibson Center for Senior Services, has lead an effort to increase awareness of local and state services and ensure residents know how to contact providers. Many communities are focused on recreation and outdoor activities to foster exercise while mitigating social isolation, both considered critical to healthy aging.

Newport town officials highlighted the ability of its dog park and community garden to provide all residents with another place to exercise and connect socially to secure grants. To ensure the greatest access possible, the garden will have easy-to-reach raised beds and walkways safe for people with physical disabilities.

“Neither are solely focused on getting dogs exercised or growing tomatoes,” said Town Manager Hunter Rieseberg. “Both of these are part of a social link. It’s as much about the community as it is the purpose of the place. I would argue that it’s equally or even more valuable than what is transpiring at that location.”

To be designated age-friendly, communities must write a plan from the bottom up, starting with a 30-question community survey about the ability of a town or city to meet older residents’ needs and wants. Questions range from availability of transportation and health care to services that would help residents remain in their home as they age. Near the top is a question that asks respondents how likely it is that they will move elsewhere in their older years and why.

The responses are meant to guide local strategic plans and municipal priorities by raising awareness of what it takes and means to be age-friendly.

“This to me is getting people to talk about (options, such as) if you set up a transportation system, you might want to make sure certain bus routes go to the hospital,” Debra Whitman, AARP chief public policy officer, said. “Those things, unless you have the intersection of different groups talking about these related issues, won’t happen.”

Marianne Jackson, executive director of the Gibson Center for Senior Services, concluded the same in 2018, deciding her organization needed to lead the effort to convince 12 small towns, 11 in New Hampshire and one in Maine, to join forces in pursuing age-friendly initiatives.

“You have three selectmen and a police chief and a fire chief. That’s it. And those people are hounded with all the things they’ve got to do,” Jackson said. “No one town can do it. The Gibson Center realized that it needed to be the convener because we function as a region.”

Demographics were a strong motivator. Thirty percent of the region’s 14,000 residents are over 65, and by 2030, that will climb to 50 percent, Jackson said.

She said getting buy-in from town officials wasn’t hard because, like Newport’s dog park and community garden, these initiatives qualified for grants or cost little. Nor was finding volunteers willing to serve on planning committees or donate their time and skills to projects, all of which had to be achievable and measurable to make it into the plan.

“‘Somebody ought to’ doesn’t fit,” Jackson said. “There are a lot of good ideas out there, but what is within our power to do?”

The plan focuses on community connections, transportation, housing, health, and outdoor spaces. Initiatives have included making a directory of most walkable trails in each town; identifying and expanding school-based programs that bring older adults and children together; and creating a comprehensive list of local resources and how to reach providers. Also on the list is connecting more people 60 and older with a local program that provides free in-home mental health visits and recommending zoning changes to diversify housing options.

Each is intended to meet the plan’s vision, stated on Page 1: “Citizens of all ages can say they would rather live here than anywhere else.”