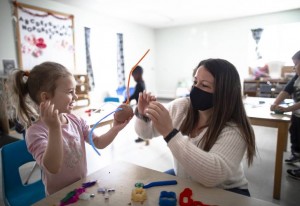 Marianne Barter struggled with the decision to keep Merrimack Valley Day Care closed for a snow day several weeks ago.

After all, many of her parents work in the medical field and in nursing homes and still require child care, even during inclement weather. In fact, the organization hasn’t closed for a snow day in 50 years.

But this year, amid a shortage of employees that’s plaguing child care centers around the state, problems like slick roads can leave a facility without enough staff to safely operate.

“I have so few employees that actually live close by, because it’s so expensive to live in Concord now, that the commute’s longer, which affects their ability to get to us on a snow day, which affects how many children I can care for, and now all sudden we’re in this situation where we’re closing for the first time in 50 years,” Barter said. “It’s incredible, and very hard for those families that have to go to work.”

Enrollment is decreasing at child care centers around New Hampshire, even as wait lists of desperate parents continue to lengthen, a paradox caused by severe staffing shortages in the child care industry, according to providers like Barter who testified at the State House in support of bills aimed at tackling the state’s child care crisis last month.

The problem is impacting families and child care centers nationwide and has been exacerbated by the pandemic, with low-income households and people of color faring the worst.

It’s had a ripple effect on the workforce, as parents without child care have had to leave their jobs, causing shortages in other industry sectors. The main challenge, experts say, seems to be recruiting staff to the child care industry, which typically offers low salaries and requires more qualifications than retail or restaurant jobs that pay the same wages or more.

“I’ll have a staff member come to me and say, ‘I love my job, but at Target I can make two dollars more an hour,’” Barter said.

“That is real money. And the economics of child care is that I can’t match it. I don’t have the coffers that Target has, and I don’t have the ability to stretch my budget as big as businesses can.”

Barter said with 70 percent of her organization’s budget already going to payroll, she can’t keep raising tuition to cover costs because it would exceed what families can afford to pay.

Shannon Curran is one of the dedicated child care workers who has remained in the industry, even as others are leaving for higher-paying jobs. Curran, who has been in the field 15 years, says she loves working with kids at Merrimack Valley Day Care, teaching in classrooms, doing one-on-ones as special education coordinator and directing the organization’s after-school program on Jennings Drive.

“A big part of it is that we’re teaching the next generation. It’s fun. They’re teaching you every day and you’re teaching them,” Curran said. “I work for a great agency, that’s another reason I stay in child care.

“I think having an incentive is big. Something to work towards. When you feel appreciated, it goes further.”

Yet, for those like Curran who remain, the job becomes more difficult as they are shorthanded.

“Typically I get to work, I’ll be in one classroom covering that until that teacher gets in, then from there, go to the next classroom,” Curran said. “Because we’re so short-staffed, I’m more in the classroom than I am able to do our special needs part, where I was able to go work with kids one-on-one. I don’t get to do that as much as it’s needed.”

One bipartisan bill, Senate Bill 446, which has been proposed in the NH Senate, seeks to establish a child care workforce fund to administer grants to child care centers to finance the recruitment of workers and to offer financial incentives like bonuses and benefits to encourage worker retention.

In a Jan. 27 Health and Human Services Committee hearing, the bill’s sponsor, Sen. Rebecca Whitley, a Concord Democrat, described child care staff as “the workforce behind the Granite State workforce” and said New Hampshire had 1,500 unfilled child care positions as of December 2021.

“Child care programs offer a supportive environment for healthy child development and prepare children for school and life, but they also allow parents to get back into and remain in the workforce,” Whitley said. “The pandemic illustrated just how essential child care is to our economy when all of a sudden no one had it anymore. … But unfortunately, the pandemic also exposed the fragility of the new Hampshire child care system and the need to solidify this workforce.”

At Merrimack Valley Day Care, the average employee has been there 16 years. Barter believes a reason for the lack of new employees is a lack of early childhood education offerings in New Hampshire career and tech ed schools that can channel students into the field. According to the state Department of Education’s 2021 list of CTE offerings, no New Hampshire schools offer an early childhood education program. In the absence of a school-to-career pipeline, Barter says bonuses could go a long way to attracting new people to the field.

“I think starting bonuses, anything that gets people attracted to our field at this point is really hugely important,” Barter said.

Two other bills also aimed to address the crisis this year, one is seeking to establish a fund to finance new child care businesses or tuition costs for children at a pre-existing facility, and is currently in committee. Another, calling for a committee to research the issue, was reported inexpedient to legislate by committee.

Even state legislators themselves aren’t immune to the problem of the child care shortage. One bill, House Bill 1370, currently in the House Legislative Administration Committee, seeks to establish a committee to study child care options for New Hampshire state legislators.

Its sponsor, Rep. Matthew Wilhelm, a Manchester Democrat, said in a committee hearing Jan. 19 that providing child care would help to make serving in the Legislature easier for Granite Staters in their 20s, 30s and 40s who are parents of young children. The average age of New Hampshire state representatives in the year 2021-2022 was 61 years old, according to data Wilhelm shared from the House Clerk’s office.

“I believe it would be smart planning and good public policy for us to do something to address this unique barrier to public service in the hopes of increasing representation of Granite State parents, the bulk of whom are in their 20s, 30s and 40s, whose lived experience is currently underrepresented in the New Hampshire Representatives,” Wilhelm said.

Barter has testified in support of the child care workforce funding bill and hopes it will bring what she calls a “lifeline,” to other daycare providers like her.

“I think when push comes to shove, this bill will be a game-changer for us,” Barter said.

“It’s an opportunity for us to retain the people who are in the field and help until we can hopefully work out a plan where the economics of child care gets much better.”