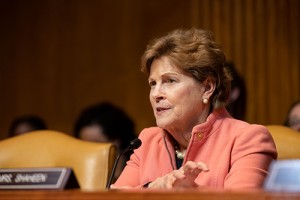 U.S. Sen. Jeanne Shaheen said she is “going to do everything I can to make changes” to open up a second round of Payecheck Protection Program funding.

His management and marketing company owns the T-Bones, C.J’s, Cactus Jack’s and The Copper Door restaurants.

“The main issue we see in our industry is that anybody who got PPP money in round one is faced with running out of that money in the next few days and we’re going to be back to where we were when we had the stay at home order put in place in New Hampshire,” Greiner said.

“We’ve got to make tough decisions, do you lay off people we just hired back and all that PPP money goes to waste?”

He said that if his industry could get loans that would cover four more weeks of operations, this would get restaurants through a critical time period until many Covid-19-related restrictions will presumably be lifted.

In a later interview, Greiner noted that if restaurants have to lay off employees again, these workers will go on unemployment and there would be a cost to the federal government in any case as it is funding enhanced state unemployment benefits.

He also noted that the PPP still has $120 billion available but not yet spent on loans, demand for which has dropped. He said that if $15 billion of that amount could be made available to the restaurant industry, this would cover expenses until normal business operations could resume.

Greiner was one of several business leaders on the conference call who urged Shaheen to push for businesses to be allowed to get second loans under the program.

Shaheen said she and other colleagues have been trying to get support from Senate Republican leadership for a new round of loans.

“I know that for many of you, the situation is looking desperate,” she said. “I am going to do everything I can to make changes to the program that we’re hearing from you and also to provide a second round of funding so that people can continue to get help until you’re able to open back up your businesses.”

More than 25,000 New Hampshire businesses have been awarded a total of nearly $3 billion in 1% interest loans through the PPP, according to Rachael Roderick, acting director of the SBA’s New Hampshire district office. Two months of payroll and select expenses can be forgiven from the loan.

A House-passed bill to provide additional flexibility in the program, but no new money, was approved by the Senate Wednesday night and sent to the president.

The legislation would give businesses 24 weeks to use the money and still get it forgiven, up from eight weeks in the current program. Also, businesses would be allowed to use 60% of the money on payroll and 40% on other allowable costs, changes from the original 75% on payroll and 25% on costs. The term of the loan would grow to five years from two.