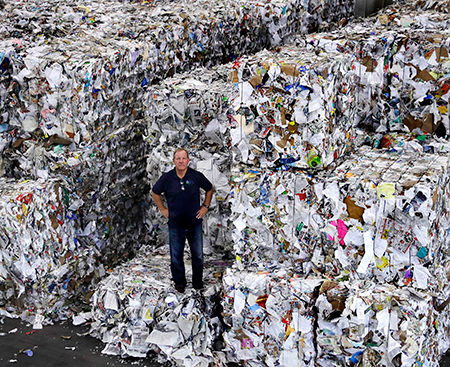 Ben Harvey, an owner at E.L. Harvey & Sons, a waste and recycling company, poses on bundles of residential mixed fiber, comprised of a variety of paper and cardboard, in Westborough, Mass. (AP Photo)

Hypertherm Inc. recycles 98% of its waste. Coca-Cola Bottling Company of Northern New England is headed for 96%. Hannaford’s 79% includes recycling all of its food waste.

While municipalities rethink their recycling programs in light of falling markets, businesses — at least those that care about the environment — seem to be stepping up their game.

“Recycling rules!” proclaims the Northeast Resource Recovery Association, a nonprofit organization based in Epsom that promotes recycling. “But the rules have changed.”

By now, many have heard about the recycling glut. Cardboard is selling at half the price it used to. Mixed paper and glass once fetched cash. Now you have to pay to get rid of them. And that single-stream blue recycling box in the break room? Well, such commingling is at the heart of the current recycling dilemma.

“We switched to single stream a long time ago,” said Colleen Flaherty, communications coordinator for the Sustainability Institute at the University of New Hampshire. “We got higher rates of recycling, but also higher contamination. It didn’t seem to bother anyone back then though.”

It does today. Now, haulers come equipped with a camera on the truck and send a photo to the central office. If there is too much trash, the result is a fine of a few hundred dollars for UNH.

You can’t blame the haulers, and you can’t really blame China, though that nation is really the economic reason underlying the original switch to single stream. China had agreed to take much of the world’s recyclables, giving municipalities, especially those with curbside pickup, a great way to increase recycling rates. Rather than make residents toss their glass, plastics, cans and paper in different containers, they could be commingled in one container and sorted out at a materials recovery facility.

Pay-as-you-throw accentuated the contamination problem because it gave a financial incentive to turn refuse into recyclables.

And China was still importing materials with contamination rates as high as 20%, rendering them useless.

In 2013, China issued its “Green Fence” warning, and when that went unheeded, it took out its “National Sword,” cutting off the recycling pipeline.

“China pulled the plug,” said Michael Durfor, NRRA’s executive director. “Everyone who switched to single stream is scrambling. Vendors are losing their shirts.”

Ben Harvey, president of E.L. Harvey and Sons Inc., a MRF, still has his shirt. “But we are scrambling all the time to try to cover our costs, which cannot be offset enough these days by the values of the materials. It’s an upside-down marketplace.”

E.L. Harvey & Sons, located in Westborough, Mass., gets about 15% of its business from New Hampshire’s southern tier. (New Hampshire doesn’t have a major MRF, so most businesses and towns end up shipping their recyclables out of state.)

At one point, Harvey had 6,000 tons of paper piled up in the company parking lot. The lack of demand has driven down the price to Great Recession levels.

It isn’t just paper. Glass has been a problem for years. Plastics are tough, particularly rigid plastics that aren’t Coke or milk bottles. Even scrap metal prices are low.

Sometimes, Harvey said, the company has been able to renegotiate prices with municipalities. Other times, he is locked into long-term contracts and eats his losses. But he hasn’t reduced his 350-person workforce.

“No, I have to hire more people to increase the quality of the materials. That’s great for my profitability,” he said.

Still, he took the situation in stride.

“Look, I’ve been in the recycling business for 40 years. It’s a commodity business. It goes up and down. We just try to adjust, to ride it out.”

How this is affecting New Hampshire is anybody’s guess. The latest recycling figures are three years out of date and may not be accurate, since there is a double-counting issue involving municipal waste and no count of a lot of recycling by businesses.

With those caveats, the state estimates that just a quarter of 1.3 million tons of waste generated in the state was recycling and composting, short of the 40% goal, and there has been little improvement over the last decade. More than half of that total waste is still landfilled, 15% incinerated and 6% shipped out of state. But that was before the recycling commodity crash hit.

But Harvey hasn’t noticed any falloff in supply. “It’s still coming into the door at the same amount as prior to all this,” he said.

That may be that Massachusetts forbids municipalities from trashing recyclable materials. In New Hampshire, not all municipalities switched to single stream. Those that are still separating the materials may not be making as much money as they used to, but for them recycling is still cheaper than disposal, said Durfor.

And even single-stream municipalities in the Granite State continue to recycle, focusing their efforts for now on reducing waste as a whole and contamination in particular. Durfor urges them to continue to do so, noting that limited landfill space will push tipping fees so high that they would eclipse the downturn in recycling prices.

‘The right thing to do’

For the most part, businesses, particularly larger ones, that buy, produce and discard in bulk, don’t single-stream. They are still affected by the glut, since they don’t get as much for their materials as they used to. But those contacted by NH Business Review say they have no intention of abandoning their efforts, which are only partly motivated by economic reasons.

“In the long run, the bottom line is money, of course. Getting rid of trash is not cheap,” said Ray Dube, sustainability manager at Coca-Cola Bottling Company of Northern New England, whose headquarters is in Bedford. “But it’s mainly because it is the right thing to do.”

That latter reason has become more important lately because Dube isn’t sure these days if his efforts are saving money.

You’d think that Coca-Cola would be mainly recycling its plastic bottles. It does chop up returned bottles into pellets used to manufacture materials like the fabric used for tops of sneakers and the lining of Polartec jackets.

But like most businesses, the biggest item is the cardboard box. A ton of that cardboard, which once fetched $140, now brings in less than $70, which may or may not offset the cost of the program.

“In the long run, it’s financially viable, but we don’t do a day-to-day analysis,” Dube said. “It’s part of our business. This is what we are going to do.”

Hypertherm, which employs nearly 1,000 workers at its Lebanon facility, started taking recycling seriously in 2010, when an outside consultant’s audit revealed nearly half of the company’s waste was going into a landfill, said John Rooney, Hypertherm’s environmental program manager.

After creating a “green team,” the amount going to the landfill dropped to a little over a third.

Then a few years ago, it partnered with Casella Waste Systems. A Casella employee remained on-site to help identify recycling opportunities and held weekly meetings to help implement them. Casella also partnered with other area businesses, such as Dartmouth-Hitchcock Medical Center, to consolidate shipments.

As a reward, Casella gives Hypertherm rebates for its own materials and a “royalty” for what it gets from its neighbors. Those payments have shrunk 43% over the last few years to about $30,000 a year, Rooney said. That sounds good until you consider the $120,000 a year the program costs. Hypertherm doesn’t keep track of voided costs, so the company is not quite sure it was, or is, making or losing money.

“We like to believe we were breaking even before,” said Rooney. “But there have always been costs involved. That is something we are OK with. We just work closely to manage it.”

Hannaford Supermarkets’ biggest recycling stream, its food waste, is not impacted by the recycling glut. The company has been able to avoid disposal costs by giving the food to food pantries, for use as animal feed and to a place in Maine that cooks it with manure, burns off the methane for energy and uses the fiber for cow bedding and the liquid to spray on corn. The rest is composted.

“It wouldn’t make sense to backtrack,” said George Parmenter, Hannaford’s manager of sustainability. “Even though it costs a little bit right now, it’s symbolic to the public that we keep doing it. And once we stop, it would be really hard to start it up again.”

Hannaford is not alone in recycling plastic bags, said John Dumais, president and CEO of the New Hampshire Grocers Association. The stores send a lot of them to Trex Company, which uses it to create outdoor furniture that is sold in places like Home Depot. Dumais cites that reuse as a reason to oppose a bill banning the single-use plastic bags that recently passed the New Hampshire and is now being considered in the Senate.

Indeed, Dumais sees the recycling glut as an opportunity. When China got into the recycling business, it undercut local manufacturing. Now that they are pulling out, it provides an opening for entrepreneurs to fill the gap.

Christopher Bodkin, owner of Circular Blu in Bradford, could be considered one such entrepreneur. The company specializes in taking in plastic waste — like sterilization wrap — from medical companies and selling it back to them as doctor’s scrubs, patient gowns and tote bags.

The company, which subcontracted out the processing to a Lowell company, is hoping to build its own facility in Londonderry to expand operations.

“We take a high-quality plastic that is thrown in a landfill,” said Bodkin. “It’s an opportunity to be paid to make a product out of someone else’s waste.”