Companies take a variety of steps to cut emissions 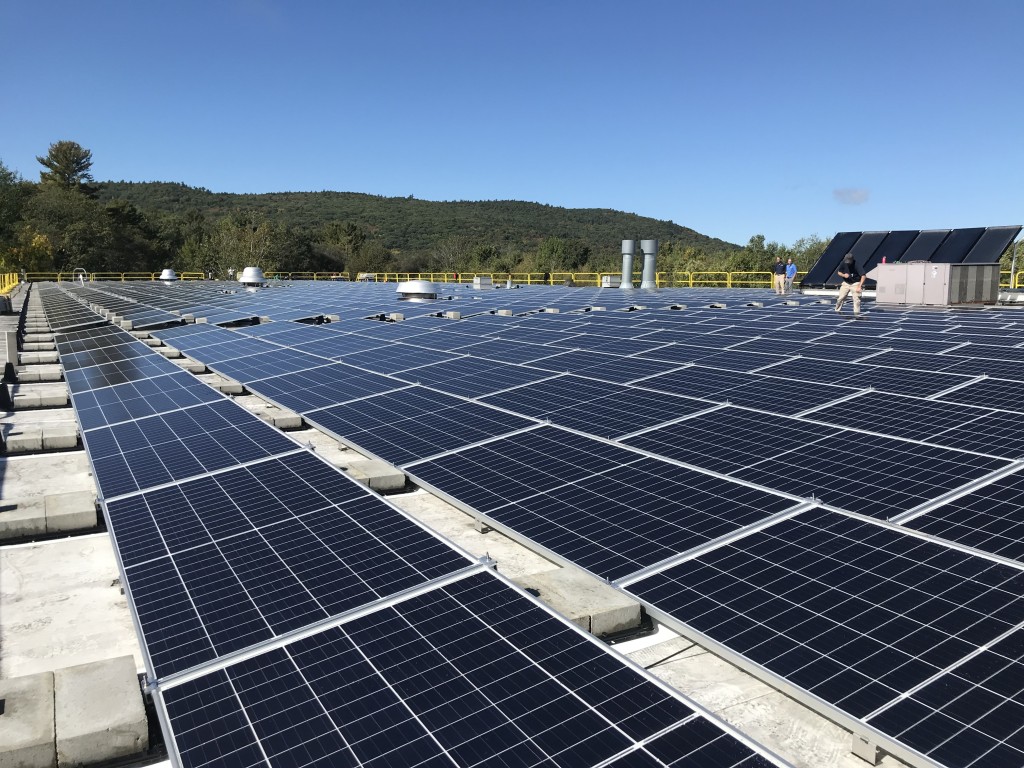 Filtrine, a manufacturer in Keene, has installed 100,000 square feet of solar arrays.

Filtrine Manufacturing Company of Keene powers its equipment with the sun, and heats its operations with wood.

Grappone Automotive Group of Bow taps the earth to heat its LEED-certified building.

Each company, in its own way, is doing its bit to slow down climate change. It’s hard to keep track of how many other companies in New Hampshire are following suit, or even the organizations who are trying to keep track of it all.

“Climate change is the No. 1 issue among our business members,” said Michelle Veasey, executive director of New Hampshire Business for Social Responsibility. The group, which recently released a “Measure What Matters” survey in conjunction with its 20th anniversary, found 57%

of its members track their energy use and a quarter their emissions. About the same number are trying to do something about it.

But it isn’t just NHBSR. Ceres, a Boston-based group, looks at how companies commit to climate change and the effect of public disclosure about their actions affect their financial statements to the federal Securities and Exchange Commission.

Another, the International Carbon Disclosure Project, grades companies on how they disclose their progress on climate change. And Science Based Targets helps companies develop targets to shoot for and measures whether they meet them. Even such organizations as the International Organization for Standardization have environmental standards that companies they work with have to measure against.

Some companies try to measure up.

Autodesk, for instance, born in New Hampshire and now headquartered in California (but with 150 employees in Manchester Millyard), received an A- grade from the Carbon Disclosure Project CDP and seems to be on everyone else’s list.

Its Science Based Target, set in 2016, is to cut emissions by 43% by this year, with an 85% reduction by 2050, compared to 2008. And in its latest sustainability report, Autodesk said that it has so far achieved that, and is now totally powered by renewable energy.

Autodesk is calling on the world’s CEOs to do the same with their companies, according to Joy Nester, a company spokesperson.

She said that would actually help companies’ bottom line, since it has packaged an Embodied Carbon Calculator with its software, which enables the building industry that uses their products to obtain carbon emissions data for the materials they use to evaluate their carbon footprint.

Stonyfield Farm, based in Londonderry, cut its emissions by 27% between 2009 and 2016. But, said Lisa Drake, the yogurt manufacturer’s director of sustainability innovation, “that was not an absolute reduction, that’s just in the product we make.”

At first, Stonyfield assumed that approach would have the biggest impact, Drake said. But the facility’s energy use only accounts for 3% of the company’s carbon footprint, the packaging only 8% and even shipping 28%. It turns out half of Stonyfield’s greenhouse gas contributions come from milk production. Indeed, worldwide, agriculture alone accounts for a tenth of greenhouse gas emissions, but if you include land use and forestry, that figure is between a fifth and a quarter.

So now Stonyfield is shooting to cut its 2017 “absolute” footprint by 30% by working with its suppliers. That doesn’t come with putting solar panels on the roof, but sinking carbon in the soil.

Megafood, a nutrition supplement manufacturer that employs 220, is also concentrating on its supply chain, which isn’t exactly local — turmeric and ginger from Hawaii, oranges from Florida, carrots from Mexico, cranberries from Michigan, blueberries from small farms in the Midwest and kale from California.

Whatever carbon the company expends in transport is more than made up with healthy soil practices, said Bethany Davis, Megafood’s director of advocacy and government. Richer soil and deeper roots mean more organic life, which breathe in carbon dioxide, upping the soil’s carbon level by a factor of four.

Potentially, 14 to 22 gigatons can be saved on a global scale, according to one study of regenerative agriculture, but Davis admits that more studies need to be done and Megafood is participating in one itself.

Timberland, based in Stratham, also looks upstream from the supply side, working to make sure that the cotton it uses is grown sustainably and leather is supplied by ranches that use regenerative practices. It had already cut its greenhouse gas emissions in half and plans to switch from 30% to 100% renewable energy in five years. In addition, the company has planted 10 million trees and commits to planting 50 million more by 2025.

The company’s parent corporation — VF Corp., which includes other apparel subsidiaries like NorthFace — has committed to cutting its own greenhouse gas emissions 55% by 2030 using 2017 as the base year, and cutting its upstream purchased goods and services (including transport) by 30%, according to Carbon Based Target’s website.

Filtrine also expends much of its carbon through its ingredients — in this case metals as opposed to plants.

The Keene-based manufacturer makes water cooling equipment, used in both drinking fountains and to cool off high-tech equipment, like MRIs.

It has done pretty much what it can with its facilities, cutting power usage in half using such energy-efficiency measures as LED lighting, then installing 100,000 square feet of solar arrays — enough to “produce all our electricity and sell a little bit to the grid,” said Filtrine President Peter Hansel.

It also replaced an oil burner with a wood chip boiler.

But a study by a couple of Antioch University New England students revealed that manufactured metals cause more damage to the planet, and recycled metals’ footprint is a lot smaller — more than six times smaller in the case of aluminum and more than five times when it comes to steel. So the company is attempting to move toward using recycled metal.

Not included in the students’ study is the effect that Filtrine has downstream, since refrigerant emissions pound for pound are a 2,000 times greater contributor to global warming than carbon dioxide, though refrigerant releases are accidental and are in much smaller amounts than the amount emitted from a factory’s smokestack.

The company has switched to refrigerant alternatives that have cut the impact by half, “but we are still not satisfied,” Hansel said.

Worthen Industries doesn’t measure its carbon impact. That doesn’t mean the privately held Nashua-based adhesives firm can’t build a 1 megawatt solar array — one of the largest in the state. Even that doesn’t supply all of the electricity it needs for its two plants’ power-hungry machinery. It works with Eversource to use hydropower to supply much of the rest.

Because Worthen is family-owned, “We don’t have outside shareholders, but that means we can take other things into consideration,” said Dennis Sasseville, the company’s director of corporate sustainability and quality systems. The company, he said, has three bottom lines: people, the planet and profit, and it has obtained ISO environmental certification. But on the whole, “doing is more important than reporting,” said Sasseville.

Grappone Automotive, another privately held firm, doesn’t boast about its environmental initiatives on its website, but when it renovated its Toyota dealership in Bow, it produced one of the few LEED-certified dealerships in New England, “and the only one in New Hampshire that I’m aware of,” said CEO Larry Haynes.

The building uses geothermal energy to heat the customer area, with skylights to enhance natural lighting. Waste oil is used to fuel special furnaces to warm the shop. And opening and closing of garage doors were sped up to minimize heat loss. Outside, there are plugs to charge electric vehicles, and there sensors so lights don’t burn all night.

But the company doesn’t spend its time calculating its carbon footprint.

“We focus on what we can do,” said Haynes.