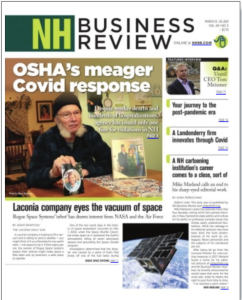 Staff writer Bob Sanders won two of the awards in the annual Alliance of Area Business Publications – an organization whose membership includes business publications from throughout North America. He was given a Gold award for Best Investigative Reporting for his article, “OSHA’s Meager COVID Response,” which the judges hailed as a “strong data-driven Bob Sanders investigation … the mix of analysis and storytelling is strong.” Sanders also won a Silver Award for Best Overall Body of Work, praising his skills at writing investigative stories and explanatory journalism.

In addition, 603 Diversity, a quarterly launched last year as a companion publication of NH Business Review, was given a Silver award in the Best Ancillary Publication category. Judges praised its “vibrant design” and “engaging content” that gives readers “real clarity about the matters surrounding diversity in the workplace.”

NH Business Review also won four second-place awards, including one for General Excellence in the Best Non-Daily Newspaper category.  Other second-place winners were Katie Hoppler and Bob Sanders in the Feature Story category for their article, “State budget proposal decimates support for New Hampshire SBDC,” Tricia Soule for her article, “Rochester Museum of Fine Arts is helping the city reinvent itself,” which was honored in the Entertainment Reporting category, and another to Bob Sanders for his article, “NH investors entangled in real estate ‘Ponzi scheme’” in the Crime and Court Reporting category.