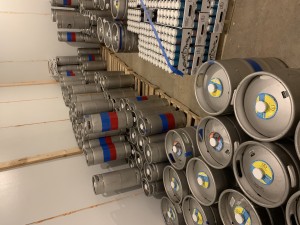 About 120 kegs at Lithermans Limited Brewery in Concord are expected to be dumped as they pass their freshness date. Larger brewers like 603 Brewery in Londonderry may be looking at dumping as many as 750 kegs. (Courtesy photo)

Before the state of New Hampshire issued orders to halt all dine-in services at restaurants and bars the day before St. Patrick’s Day, local craft breweries had already sold hundreds of kegs of beer to those restaurants.

Since then, breweries have struggled with the loss of the wholesale market and sales from their own taprooms, with some reporting their revenues have been whittled to 30% to 50%  of their usual business.

Now, after kegs they sold in early March have languished on unused tap lines across the state for close to two months, brewers are faced with a new dilemma: many of those kegs are going stale.

Since no brewer wants an inferior form of their product to be experienced by consumers, potentially harming their brand, they have little choice but to dump thousands of gallons of stale beer down the drain and replace the kegs at their own cost once restaurant business resumes.

The National Beer Wholesalers Association, a trade organization, estimates about 10 million gallons of beer were abandoned in March nationwide. That’s the equivalent of about 1 million kegs and could cost the industry about $1 billion.

“We’re not immune to this,” said Geoff Hewes, co-owner of 603 Brewery in Londonderry.

Gov. Chris Sununu’s executive order issued on May 1 to begin a phased approach to reopening the state’s economy would allow for some outdoor restaurant service as early as May 18. If that happens as planned, Hewes said they will still undoubtedly need to dump some beer, though likely a reduced volume.

He said it’s “too soon to say how much it will reduce, since all our competitors will be vying for the same tap lines.” 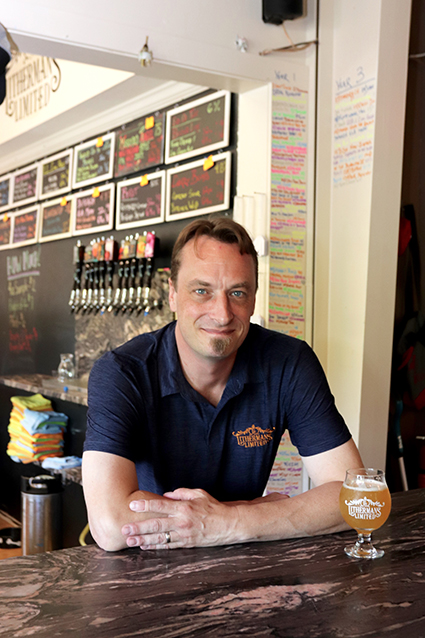 Other brewers, like Great North Aleworks in Manchester, have an average of about 400 kegs on restaurant draft lines at any given time, the equivalent of about 4,000 gallons, according to Great North sales and marketing manager Brian Parda.

He said draft beer makes up about a third of Great North’s overall business, with canned beer making up the other two-thirds.

Restaurants are never allowed to return tapped kegs to manufacturers or distributors for a refund, according to the New Hampshire Liquor Commission, but there are no restrictions prohibiting them from returning untapped kegs during the state of emergency, according to guidelines from the federal Alcohol and Tobacco Tax Trade Bureau (TTB).

That’s a decision between wholesalers and the restaurants, a commission spokesperson said. While that may help some restaurants, it could compound the costs faced by some brewers, who may already be motivated to swap kegs at no additional cost to restaurants.

The shelf life of draft beers vary by style, according to Michael Hauptly-Pierce, co-owner of Lithermans Limited Brewery in Concord, a smaller brewery that self-distributes.

IPAs, one of the most popular beer styles, and other hop-forward beers, tend to lose their freshness and flavor after about 60 to 90 days, he said. While other types of beer, like fruited sours and big Belgians, to stay the same or improve with age.

Hewes said 603’s Winni Ale might last closer to three or four months. But most of the high-ABV beers that would do better with age are usually sold out of their Londonderry beer hall rather than sold wholesale.

“Before (the shutdowns) I was doing about $10,000 a week wholesale,” Hauptly-Pierce said.

That revenue channel disappeared, but he was able to sell a similar volume of beer at much lower profit margins by selling a larger volume of canned beer.

He said he has already dumped 40 kegs of beer and will likely need to dump another 40 to 80 kegs, ultimately totaling about 400 to 500 gallons.

Dumping that beer would be a loss of about $12,000 to $30,000 in revenue depending on whether it was sold wholesale or out of his taproom.

Kelsen Brewing Co. in Derry had sold 100 kegs to restaurants the day before the shutdown. Taproom manager Michael Mahn said they’ll likely all need to be dumped.

Some breweries are turning to growlers as a way to package draft beer to go instead of dumping it, but he said growler suppliers quickly ran out of inventory.

“Because everybody needed to put their draft beer into some kind of package,” Mahn said.

There are alternatives to dumping spoiled or stale beer.

While the beer could technically be distilled into a consumable liquor, that is not allowed by state law, which requires liquor be made by raw material rather than a completed beverage.

At the request of the New Hampshire Brewers Association, the Liquor Commission lifted the restrictions partially and issued a circular on April 15 allowing brewers and distributors to unload stale beer to distillers for free. According to the circular, distillers would be allowed to use the stale beer only for making hand sanitizer, since this is “during a time of critical need.”

Andy Day at Doire Distilling in Derry has already started the process. Last week, he said Bellavance Beverage gave him 16.5 barrels (248 gallons) of beer, which he turned into about 10 gallons of hand sanitizer.

He’s also in talks with some local breweries about taking some more stale beer off their hands.

After restaurants open and business starts to get back to normal, Hauptly-Pierce said brewers will be scrambling to meet demand.

“It’s going to go from zero to 100 in three seconds once we get the green light,” he said.

Larger brewers like 603 Brewery have a cooperage of 4,000 to 5,000 empty kegs waiting to be filled, and may be able to rely on distributors like Bellavance Beverage and NH Distributors to execute some of the logistics involved in swapping kegs.

But since brewers reuse old kegs, Hauptly-Pierce said it will be difficult, especially for smaller self-distributing brewers, to juggle the process of picking up stale beer kegs, emptying them and having them ready for new batches.

So far, no one has a clear picture of how this issue would affect the state’s brewery industry overall. The Liquor Commission tracks sales by volume, but does not delineate between draft and packaged, retail and wholesale.

Last year, the state produced a total of 117,314 barrels of craft beer, which is about 3.5 gallons per adult aged 21 and over in the state, according to the Brewers Association. That number would be much higher if figures from macro-brewers like Anheuser Busch in Merrimack or Redhook in Portsmouth were included.

So far, taxes are up by $200,000 over this time last fiscal year, according to a Liquor Commission spokesperson.