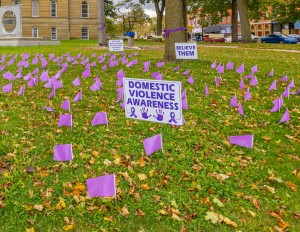 Last year, there were around 4,600 filed cases throughout the state’s Circuit Court Family Division reporting domestic violence, trafficking, sexual assault, or stalking problems. New Hampshire Legal Assistance, an organization that advocates for people without legal representation, says it is a number they predict will remain constant this year.

In almost 90 percent of those cases, plaintiffs appeared in court without an attorney or any type of legal representation.

With a $600,000 federal grant from the U.S. Department of Justice, the organization will expand its efforts to represent victims and survivors in final protection order hearings and in extended divorce and parenting cases.

There will also be a greater emphasis on providing representation for people with mental illness or substance use disorders, says Mary Krueger, an attorney who works for NH Legal Assistance.

The project also focuses on people in cases where they’re at a higher risk of serious injury or death.

“Cases where there have been threats, whether the abuser has access to deadly weapons, harm to pets, harm to children, violation of protective orders,” said Krueger.

The organization assists around 360 people who suffer domestic violence each year.

Krueger says her organization meets regularly with the NH Coalition Against Domestic Violence. Both groups have noticed a gap in service for survivors of domestic abuse who are also dealing with substance use disorders or mental illness, and that it can be more difficult for them to represent themselves in court.

“An abuser can use those things against a survivor and paint them as not credible,” said Krueger.

According to Krueger, the organization was turning away many people they couldn’t serve without the grant.

A substantial part of the grant funds will go to help WISE, a domestic violence crisis center in the Upper Valley that works with 23 communities. They offer free 24-hour crisis lines, support groups, workshops, and emergency and transitional shelters.

People can be referred to the program through 12 domestic violence crisis centers around the state.

To ask for help, people can contact 603 Legal Aid.