But significant unknowns related to the pandemic, federal aid could reverse favorable trends 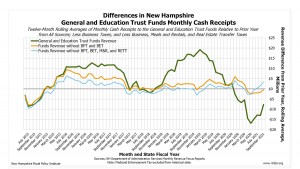 A combination of revenues recovering faster than anticipated, including some potentially atypical receipts, and underspending at public agencies has improved New Hampshire’s fiscal situation relative to projections from earlier in the year.

But while the situation is more favorable than previously expected, significant unknowns remain, including the course of the pandemic and the potential for federal assistance to states and local governments, all of which could have profound impacts on New Hampshire’s ability to fund key services for Granite Staters.

The state’s General and Education Trust Funds ended September with a small surplus for the year thus far, totaling $6.2 million, after shifting an identified $30.8 million in anomalous payments made during fiscal year 2021, which began July 1, to the total for 2020.

Many taxpayers likely made payments of state taxes in line with the July 15 federal filing deadline rather than the June 15 deadline set by the state, and the New Hampshire Department of Administrative Services adjusted for the anomalous payments in the most recent data.

While this change reduces the size of the surplus for the 2021 fiscal year, it also reduces the deficit for 2020 and does not impact the overall balance of the two-year state budget.

However, higher receipts in September, an important month for state revenues, have pushed the total receipts flowing to the General and Education Trust Funds into a surprising surplus in the 2021 fiscal year. When making projections in late May, the New Hampshire Department of Revenue Administration, based on the best information available at the time and a set of assumptions, estimated that combined business profits tax and business enterprise tax receipts would be 35% below the state revenue plan in September. Instead, business tax revenues were 16.2 percent higher than the Plan for September, rising $20.3 million above the amount expected for the month by policymakers prior to the pandemic.

The exact cause of these higher business tax receipts will likely not be known until full tax returns are provided next year, but there are several potential factors. The DRA is making tax administration changes that limited the amount of time that refunds were issued in September, which may have led to some refunds being deferred.

Receipts from large, multinational corporations, which constitute a substantial portion of the BPT base, were also notably higher. Some of these large companies may be in industries that have performed well during the pandemic. Others may be responding to the DRA’s announcement that state and federal Covid-19 relief distributed to taxpayers that was a grant, rather than a loan, is generally counted as taxable income for the purposes of the BPT. Businesses reporting a qualifying profit must pay taxes, so any taxable profit generated counting these receipts would be taxed by the BPT even in instances when it is not taxed under the federal corporate tax code.

Relief funding used to pay compensation, interest or dividends is also taxable under the BET, regardless of whether the company is making a profit. These policy changes may have contributed to business tax receipts increasing in September, which suggests some portion of the increased receipts may only last as long as government grant aid to businesses.

Beyond the two business taxes, State revenues continued some of the patterns seen previously in the recovery from the worst period of the pandemic thus far.

Meals and rentals tax receipts continued to improve from their lows in April and May, but remained $6.9 million (16.6%) below the state revenue plan in September and $29.2 million (24.6%) below the plan for the fiscal year thus far.

The initial increase in tobacco tax receipts early in the pandemic, which was interpreted in part as a result of temporary increases in personal cigarette purchases or increased cross-border sales from certain business closures, has continued nearly unabated, with every month from May to September showing tobacco tax receipts at least 15% above planned amounts.

Real estate transfer tax revenues have returned to near-normal levels after a drop during May, June and July, and both transaction volume and prices were higher in August (the basis for September revenues) than during the prior year. This suggests that a housing market with very limited inventory has both a high level of demand and movement, likely putting homes out of reach for many buyers who are unable to purchase quickly or afford high sale prices.

Interest and dividends tax receipts have continued to outperform expectations, likely due in part to behavior in the stock markets. The motor fuels tax, which support the Highway Fund and not the General or Education Trust Funds, continues to fall short of plan, as fuel consumption remained about 10% lower in August relative to the same month of the prior year.

While both higher revenues in September and accounting adjustments have changed what the revenue shortfall looks like, new data released in early October also provides an initial estimate of spending at State agencies during SFY 2020.

State agencies are expected by policymakers to underspend their budgets, generating savings typically referred to as the lapse that help policymakers balance planned state budgets. However, the degree of underspending was much higher than originally anticipated.

In total, relative to the plan crafted by policymakers in the budget and based on these preliminary data, the General and Education Trust Funds ended the 2020 fiscal year about $67 million short of expectations. Although a $67 million shortfall is still very significant, this amount is considerably less than the approximately $144 million revenue shortfall estimated in late summer.

Agencies may underspend their budgets in 2021 as well, and the 2020 savings were likely generated in large part during only the last quarter of the year. However, these savings may not only reflect reduced activity due directly to the pandemic, but also constraints on expenditures put in place within the executive branch. While these policy changes reduce the deficit, they may also limit services to Granite Staters and slow hiring of personnel or program implementation.

State agencies that are currently providing additional services supported by the federal funds provided to the state for Covid-19 relief may also begin overspending their budgets in the second half of 2021 in an effort to maintain those services. More than $93 million has been appropriated directly to support state agencies from the federal relief funds as of Oct. 2, including the Department of Health and Human Services, New Hampshire Employment Security and the Department of Education. Tens of millions more have been managed by agencies to administer other programs, with the Department of Health and Human Services spending $137.8 million on personal protective equipment as of Oct. 7.

Without additional federal action, any of the flexible federal Covid-19 relief funds managed by the state that are unspent on Dec. 30 must be returned to the federal government. When the state loses access to those resources, agencies may have to increase expenditures beyond their budget lines to meet the needs of Granite Staters as the pandemic and the associated economic impacts continue.

Although these early October data suggest a more favorable outcome than previously feared, the risk of a deteriorating picture remains high.

The pandemic may intensify again in the winter months, prompting more economic closures like those that had the deepest impacts on state revenues and the wellbeing of Granite Staters earlier this year. The loss of available federal funds may put more pressure on current state budget expenditures. However, additional action by Congress could result in more aid to state and local governments to fill budget gaps.

Budget shortfalls may be smaller than originally feared, which makes preserving and enhancing key services more likely during this State budget and the next budget biennium. Smaller shortfalls provide more opportunity for policymakers to avoid service reductions and spread any new efficiencies or revenue increases over a longer time horizon, into the next budget cycle.

However, any state budget deficit generated this year must be resolved in the next state budget, with increased revenues and federal aid protecting core services for Granite Staters.