New Hampshire to get $8.5 million in 34-state Juul e-cigarette settlement

Company to pay $439 million to resolve ‘issues from the past’ 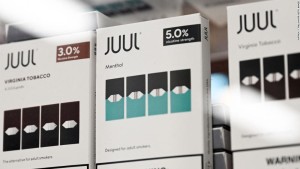 New Hampshire is among 34 U.S. states and territories that will share in a $438.5 million settlement with electronic cigarette maker Juul Labs Inc. over charges that it downplayed its products’ risks and targeted underage buyers, several states announced.

In the settlement, announced Tuesday, Juul said it would stop certain kinds of marketing, including the use of cartoons, product placement and depictions of users under 35.

The $438.5 million will be paid out over a period of six to 10 years. New Hampshire will receive at least $8,454,901.22, with the total amount paid increasing the longer the company takes to make payments, according to New Hampshire Attorney General John Formella.

Juul, which has not admitted wrongdoing in the deal, called the settlement “a significant part of our ongoing commitment to resolve issues from the past” and said the marketing restrictions are already among its practices since its “company-wide reset” in 2019.

Under pressure from regulators at the time, the company stopped manufacturing most of its products’ flavors and halted much of its advertising.

In a statement, Formella said the company pushed an entire generation toward nicotine addiction with marketing tactics such as kid-friendly flavors and false impressions of product safety.

“At the end of the day JUUL reversed decades of public health progress in the fight against smoking and addiction,” Formella said in a statement.

The deal stems from a two-year investigation led by Connecticut, Texas and Oregon.

The states’ investigation found that Juul marketed its e-cigarettes to underage teens with launch parties, product giveaways and ads and social media posts using youthful models, according to a statement.

The 34-state settlement puts an end to one of the biggest legal threats facing Juul. Nine separate lawsuits from other states still loom, and the company faces hundreds of personal lawsuits brought on behalf of teenagers and others who say they became addicted to the company’s vaping products.

Earlier this year, the Food and Drug Administration moved to ban all Juul e-cigarettes from the market, but company challenged that ruling in court, and the FDA reopened its scientific review into the company’s technology.

The onslaught of actions has hammered Juul’s value. In 2018, Altria Group acquired a 35 percent stake in the company for $12.8 billion, but in July Altria said its investment was worth only $450 million.