Median price remains up over the year, but drops $10k from June

The pending real estate slowdown you’ve been hearing about anecdotally is beginning to appear in the latest July single-family home sale statistics from the NH Association of Realtors.

Home sales in July declined by nearly 18 percent compared to the same period a year ago, and they also declined from June by about 10 percent. We once could blame all that on the lack of inventory, but there was only a slight decline in the number of homes for sale as homes on the market remain scarce. 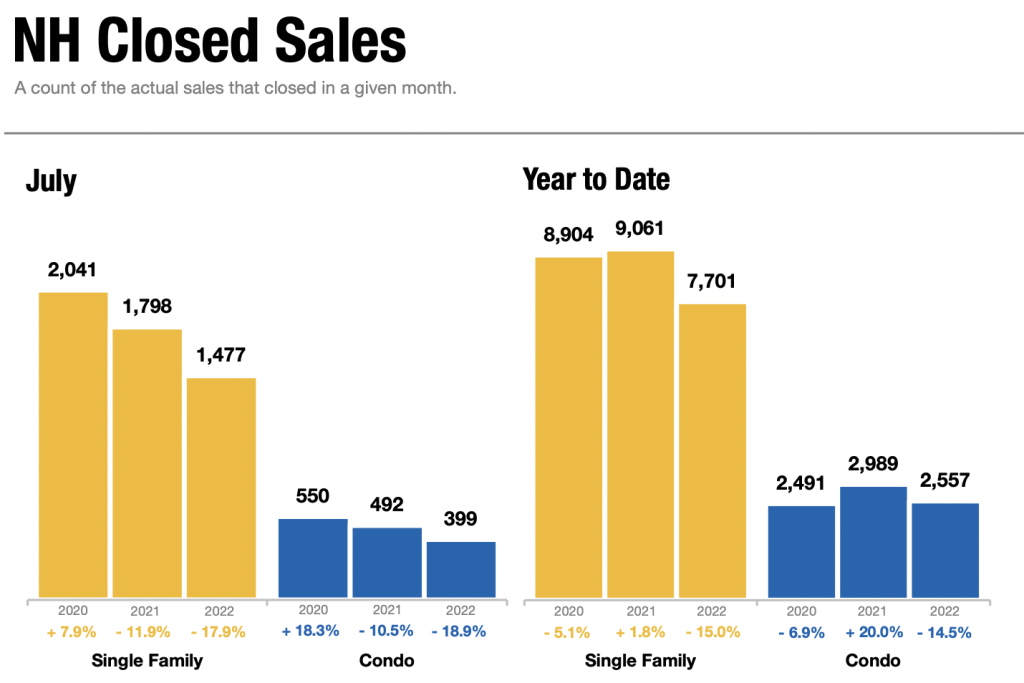 When they come on the market, they are sold in an average of 16 days, 3.4 percent above the asking price. A year ago, they went for 3.9 percent over asking.

So there is a good chance that rising interest rates are playing a part as well.

All this is true for condo sales as well.

Coos County saw the biggest jump in the median price of a home in July – 50.8 percent, to $237,500, the lowest median in the state by far. Rockingham County remains the priciest county with a $590,000 median price, up 13.5 percent. The biggest drop-off in closed sales was seen in Belknap County, where sales fell by 31.3 percent. Homes sold fastest in July in Strafford County, where sales took an average of 10 days.

Meanwhile, on the Seacoast, the Seacoast Board of Realtors reported that sales of single-family homes in the 13 communities it tracks fell to a new July low amid growing economic concerns and a pervasive lack of inventory.

The Realtors reported that agents recorded 72 sales, off 25 percent from last year and 29.4 percent from June. As for condos, they said inventory reached an 11-month high of 92 active listings, but sales fell 20.8 percent from a year ago and 17.3 percent from the previous month.