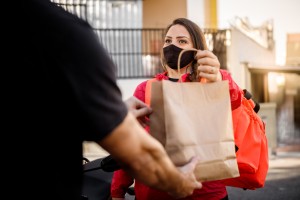 Lawmakers in the New Hampshire Senate are moving to regulate the way third-party food delivery apps work with local restaurants, citing complaints that the apps have listed some restaurants without their knowledge.

In a vote Tuesday morning, members of the Senate Commerce and Consumer Affairs Committee recommended, 5-0, to require that food delivery apps enter into explicit agreements with the restaurants before adding them to their apps.

The proposed law, Senate Bill 593, would affect popular phone apps like DoorDash, Grubhub, and Uber Eats. It would require express authorization for the food app “to take orders and deliver meals prepared by the food service establishment or retail food store.”

The app companies could be fined $100 for every delivery made without first obtaining an agreement, the bill states.

Restaurant owners complained in recent months that delivery apps have added their restaurants to their apps, and sometimes raised prices and added menu items that have been discontinued.

That means customers order items that don’t exist, the restaurants say. And because the orders aren’t connected to the restaurant’s system, some delivery drivers show up to pick up orders that were never officially placed, causing delays and frustration for customers.

Over time, restaurant operators have argued, those haphazard arrangements and ordering mishaps could cost them customers, a problem as takeout has surged during the COVID-19 pandemic.

Sen. Kevin Cavanaugh, a Manchester Democrat, said the legislation could help correct that dynamic by forcing the delivery companies to work with the restaurants first.

“When a third party offers delivery service without the consent of the restaurant, they unnecessarily put the restaurant’s reputation at risk, create an illusion of price gouging, and develop a false relationship between the small business and the customer,” Cavanaugh said in a statement.

Under the House version of the bill, the measure would take effect immediately upon being signed by Gov. Chris Sununu. But in an amendment Tuesday, the Senate recommended moving the start date to September 2021 to allow the delivery apps to prepare.