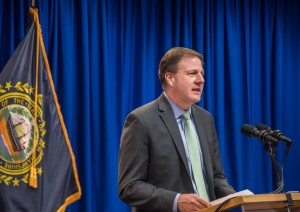 The Self-Employed Livelihood Fund ‘is for bed and breakfast owners, small shopkeepers, and other mom-and-pops,’ said Gov. Chris Sununu.

Self-employed Granite Staters will have to wait until after the July 4 weekend to apply for state-controlled CARES Act funds, Gov. Chris Sununu announced Thursday.

The Self-Employed Livelihood Fund, as dubbed by Sununu, would be paid for with whatever is left over from the $400 million Main Street Relief Fund for small businesses, which ended June 12 with $62 million remaining, though more might be given to businesses that successfully appeal by July 2.

The Main Street Fund is the largest allocation of the $1.25 billion in federal CARES Act funds given to the state, but its rules exclude businesses without employees.

The Self-Employed Livelihood Fund, which will go live from July 6 to July 17 is for businesses with less than $1 million in revenue, and the maximum grant size will be $50,000, Sununu revealed Thursday.

“This fund is for bed and breakfast owners, small shopkeepers, and other mom-and-pops,” Sununu said.

Like the Main Street program, it is designed to mitigate financial losses due to the pandemic. If it works the way that program worked – and Sununu said it would – businesses would have to provide information on last year’s gross receipts, subtract estimated gross receipts so far this year, then subtract federal aid received.

That federal aid includes unemployment benefits, which were extended to self-employed individuals starting March 17.  That could be quite a lot of assistance, since the federal government tacked on an extra $600 a week in benefits starting at the end of March and ending July 25. Self-employed individual can still receive state jobless benefits under until the end of this year under the CARES Act.

Slightly less than 10,000 self-employed Granite Staters are currently collecting unemployment benefits, down from a peak of 12,000 in early May.

Once all Self-Employed Livelihood Fund applications are in, the state will figure out how much all of the qualified businesses lost in total and then figure out what percent of losses each business will receive.

Secondly, only the self-business who shut down their business (even temporarily) can receive unemployment benefits, and the state self employed fund is for those who want to keep their business open or reopen it.

Meanwhile, the deadline was Thursday for applicants to another program, the Nonprofit Emergency Relief Fund.  As of Wednesday, some 550 organizations began the application process, according to the NH Charitable Foundation, which administers the fund. But at deadline it was not known how many applicants followed through, or how many others applied. The application was a lot more complex than the Main Street program.