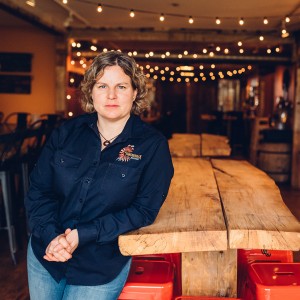 Nicole Carrier, co-founder of Throwback Brewery in North Hampton, says the new policy is straightforward for businesses that take reservations and a small step for first-come, first-served restaurants.

Restaurants in New Hampshire began collecting customers’ names, phone numbers and times of arrival over the weekend as part of a new policy to aid the state in contact tracing.

State epidemiologist Benjamin Chan said last week that New Hampshire’s recent rise in Covid-19 cases is largely due to community transmission driven in part by the cold weather: small gatherings and dining are moving inside. Several restaurants across the state have reported staff and customer cases in recent weeks, some of which have led to community spread.

Nicole Carrier, co-founder and president of Throwback Brewery in North Hampton, said the new policy is straightforward for businesses that take reservations and a small step for first-come, first-served restaurants.

“Honestly, we just all want to get through this so we can get to the other side and welcome customers and get back to the hospitality that we’re used to, and serving people the way that we used to,” Carrier said.

Ami D’Amelio, chief operating officer of the Red Arrow Diner in Manchester, said some customers have been reluctant to give their information, and some have altogether refused.

“[Some have] been concerned for their privacy,” she said. “But we are going to have an electronic version so people can feel more comfortable in putting in their own information and they don’t have to have it on a piece of paper, because that’s what we’ve found. They don’t want to write it down.”

Restaurants do not have to refuse service if customers do not provide their contact information, but Mike Somers, CEO of the New Hampshire Lodging and Restaurant Association, said a major purpose of the guideline is to avoid more restaurants becoming the subject of Department of Health and Human Services press releases. He hopes the guideline will help state health officials identify individual cases faster, rather than having to publish a public notice.

“Those are just terrible for the industry and the perception of the industry,” Somers said. “So being able to provide contact tracing data from the individual tables will help us avoid doing that.”