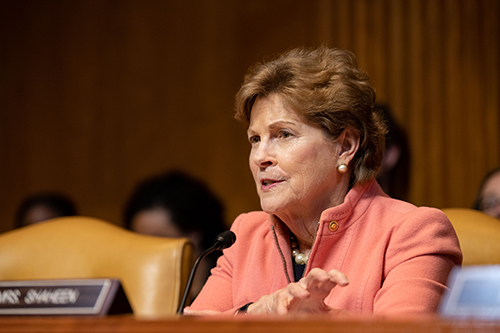 Of the 365 renters of affordable apartments owned by Lakes Region Community Developers, about 60% percent receive income-based subsidies. About another 30% of tenants are getting other assistance, such as enhanced unemployment benefits.

But the remaining 10% “are really. really struggling,” the group’s executive director, Carmen Lorentz, told U.S. Sen. Jeanne Shaheen Wednesday morning during a conference call on housing issues. It’s not just the loss of income, said Lorentz, it’s the increased spending on food and utility as families shelter in place. “They are falling further behind in their rent. We are really nervous what happens at the end of the month.”

Indeed, nearly everybody on the call was nervous. One deadline has already expired. That was on July 1, when Gov. Chris Sununu’s moratorium on evictions and foreclosures ended, though he altered eviction procedures to effectively give tenants another month to come up with back rent.

Another, a moratorium on utility shutoffs, ends July 15. Federally enhanced unemployment benefits expire at the end of the month. And at end of the year, all federal funding through the CARES Act, which includes a $35 million New Hampshire Housing Relief Program, will be expended.

That last deadline looms especially large in the North Country.

“We are a tourist-based economy,” said Jeanne Robillard, CEO of the Berlin-based Tri-County Community Action Program. “So many people are out of work because there is no work.”

The summer season has been dismal, she said, and if the ski season is also hit by a second Covid wave, “extending those deadlines are very, very important.”

Extending that deadline is one of the things all of the call’s participants agreed on, along with more flexibility and more funding for emergency shelters and permanent housing.

“We have to decompress the shelters as a public health issue,” said John Manning, executive director of Southwestern Community Services.

Families in Transition-New Horizons in Manchester, for instance, has had to reduce the capacity of its 138-bed shelter to 64. It was trying to open another 40-bed shelter, “but even if we get the funds, we don’t anticipate to fully fund the second shelter, and those funds are temporary,” said Cathy Kuhn the organization’s chief strategy officer. “We need to get people into permanent housing, but it just isn’t there.”

The housing shortage has been a long time coming, said Michael Reinke of the Nashua Soup Kitchen and Shelter.

“What we are experiencing today is a result of a long-term disinvestment in affordable homes,” he said.

When it comes to rental housing, the vacancy rate was as low as 0.75%, and the “pandemic unveiled the fragility of our housing market,” said Elissa Margolin, director of Housing Action NH. “Someone facing eviction has very little choice.”

Renters are the hardest hit, said Dean Christon, executive director of the New Hampshire Housing Finance Authority, since so many of them are employed in the struggling hospitality and retail sectors, so we are “very concerned about the phasing out of unemployment.”

But the shortage is acute for homebuyers as well. Inventory was already tight, but it has shrunk because potential sellers are “reluctant to put their homes in the market,” said Christon.

Eventually, it is a question of infrastructure – whether it means expanding the state’s shelter system or building more affordable apartments and homes, but that takes long- range planning and construction, and we “don’t have time to do this by this deadline,” Margolin said.

Shaheen agreed that when the CARES Act deadline was set “no one knew how long this was going on.” She said she supported housing as “critical piece” of any infrastructure package put together in Washington.

Some funds are available through the U.S. Department of Housing and Urban Development and its Community Development Block Grant program. But HUD hasn’t issued guidance on how to spend the money and nonprofits can only access CDBG grants though municipalities, which are “overburdened with their own responsibilities, so it is an uphill battle,” said Katherine Easterly Martey, executive director of the state Community Development Finance Authority.

Shaheen said she sent a letter to HUD calling on it to release $4 billion in CARES Act funding for emergency housing. She also has sent a letter to Senate leadership asking that more CDBG money be allocated to smaller states. Finally. she noted she was co-sponsor of the Emergency Rental Assistance and Rental Market Stabilization Act of 2020, which would provide $100 billion in emergency rental assistance. She is hoping that all this and more would be incorporated in another round of funding approved by Congress.

“I hear you loud and clear – more flexibility and continuing investment is needed,” the senator said.