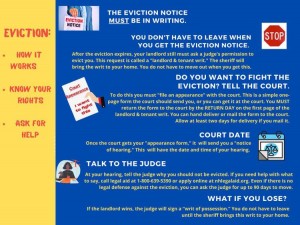 A new educational series aimed at informing tenants about New Hampshire’s eviction law and procedure will begin Wednesday, less than two weeks before a federal eviction moratorium is set to expire.

The Eviction Clinic, organized by New Hampshire Legal Assistance and the Legal Advice and Referral Center, will include free online sessions each week.

Attorneys and paralegals with the organizations will provide information about tenants’ rights during the eviction process, which “can be confusing and overwhelming, especially for tenants in crisis,” according to a press release announcing the clinic. They will also answer clinic attendees’ general questions but cannot provide legal advice on specific cases.

“It is never easy for tenants to represent themselves in an eviction case, but in this time of the pandemic, with the law changing frequently and most cases taking place by telephone, it is more important than ever that tenants understand the law and the process,” NHLA Housing Justice Project Co-Director Elliott Berry said.

The first Eviction Clinic session will be held Wednesday afternoon, just 12 days before a Centers for Disease Control and Prevention order that has offered protection from eviction to many renters since September is scheduled to lapse.

That ban — which was initially slated to expire in December before Congress extended it through January as part of a federal stimulus package last month — is the latest government measure intended to help tenants struggling to afford rent during the pandemic. President Joe Biden has indicated he plans to extend the national moratorium on evictions.

Granite State renters were protected in the first months of the pandemic by a statewide eviction ban, which lapsed July 1, as well as a separate federal policy that prohibited evictions for an additional 30 days after its July 25 expiration. The state had also distributed more than $9 million as of Dec. 10 from its $35 million rent and mortgage relief program, funded by the federal CARES Act, and will receive an additional $200 million in emergency rental aid from the latest federal stimulus.

Under the CDC moratorium, tenants who meet certain criteria can give their landlord a signed declaration protecting them from eviction. Among the conditions to qualify, tenants must be unable to pay their full rent due to “substantial loss of household income” or several other factors; make efforts to pay rent on time, including by trying to obtain publicly available assistance; and have expected to earn no more than $99,000 in 2020 (or have qualified for a $1,200 stimulus check from the CARES Act).

Landlords can ask tenants to pay whatever rent they owe when the CDC order, which went into effect Sept. 4, expires at the end of the month.

The rate of evictions has slowed since the CDC ban went into effect, though many cases have continued.

Writs of possession — legal permission for a landlord to remove a tenant — issued statewide have dropped from a weekly average of 72 for the two full weeks preceding the CDC order to approximately 50 since then, according to data published by the New Hampshire Judicial Branch.

Berry said last week that the federal moratorium has “clearly cut down” evictions for nonpayment of rent.

“We talk to tenants on a regular basis, virtually every day, who have filed the CDC declaration seeking [protection],” he said Jan. 13. “So we know for certain that there are a lot of people who are staving off eviction, for now, because of use of the moratorium.”

But some renters may not be aware of that protection or know how to defend themselves, which requires being proactive, according to Berry. Others may have missed the available rent relief, he said, though adding that the additional $200 million “should help enormously.”

Berry urged federal and state officials to extend eviction protections beyond the end of January, warning that if they lapse before the latest aid becomes available, the number of evictions in New Hampshire could increase three- to five-fold.

The NHLA/LARC clinic will be held via Zoom from 7 to 8:30 a.m. every Wednesday through February, in addition to two Wednesday sessions each month from 2 to 3:30 p.m. Registration is not required.