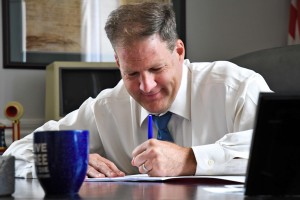 The full NH House of Representatives, on a 172-164 nearly party-line vote, approved repeal of Gov. Chris Sununu’s Granite State Paid Family Leave Plan, two weeks before it’s due to go out to bid. Sununu’s voluntary program, an alternative to a mandatory program mainly backed by Democrats, was rebuked by his own party. Only 16 Republicans voted to reject House Bill 1165, while all but three Democrats voted to defeat the nascent program.

But Democrats didn’t vote for the family leave plan because they necessarily like it.

“I ask you not to repeal a program that I cannot possibly vote for,” said Joshua Adjutant, D-Enfield. “This is an upward redistribution of wealth from the working class to the permanent management class and doesn’t benefit those who need the program the most.” Still, Adjutant urged rejecting repeal and instead try to improve it.

“Any family and medical leave program is better than no family medical leave,” said Rep Brian Sullivan, D-Grantham, who urged lawmakers to reject this “premature repeal.”

House Republicans, however, wanted to kill the plan before it got started. They were miffed that the program was slipped into last year’s budget, denying lawmakers a standalone vote.

Unless they took this “short window of opportunity” to repeal the plan “while still in its infancy,” we will “forever after be stuck with another taxpayer-funded social entitlement scheme,” argued Rep. Leonard Turcotte, R-Barrington.

Turcotte noted that the government agency that would implement the plan did little to defend it before lawmakers, except for an appearance last week by Insurance Commissioner Chris Nicolopoulos minutes before the House Labor Committee voted on the bill.

In that appearance, Nicolopoulos, called the plan a “phenomenal compromise,” since it offered the benefit to everyone without mandating universal participation, unlike the Democratic proposal, which Sununu vetoed, was based on a half-percent payroll deduction.

The governor’s plan would piggyback on a family leave benefit provided to the state’s 11,000 employees at taxpayers’ expense.. A request for proposals to select an insurance company to handle the program is due to be sent out this month. The program itself is supposed to start at the end of the year.

Employers who wish to participate in the program would receive a business tax credit equal to half of their outlay. Individuals who choose to participate would pay a premium capped at $5 a week. The premium would be subsidized by earmarking proceeds of an insurance tax paid by the provider to the program.

It’s a program that backers call unique because it has never been tried before.

Turcotte argued that it is no longer needed because one company has offered to sell family leave insurance in New Hampshire without government incentives. The product doesn’t include leave for workers covered, just their family, so it would have to be patched together with a short-term disability policy.

Despite the repeal vote, the Granite State Paid Family Leave Plan isn’t dead yet. Repeal might receive a chillier reception in the Senate, which the plan into the budget in the first place. And even if the repeal plan passes both chambers, the House vote alone indicated that it is far short of the necessary votes to overcome a likely gubernatorial veto.

Following the repeal vote, lawmakers easily passed HB 1210, which would allow workers to refuse an employer’s vaccination mandate with a “conscientious objector exemption,” despite warnings from the NH Hospital Association that it could risk $2 billion of funding from Medicaid and Medicare, which require that hospitals mandate vaccines and don’t allow for conscience objections. Just medical and religious.

Later, the House tabled HB 1369, a bill that would have given performing arts venues the right to mandate vaccination and other safety measures like masking and social distancing, to reassure nervous patrons to come back to the theater.

And earlier, the full House voted 169-152 to table HB 1076, which would prohibit productivity quotas that don’t allow enough time for workers to take a break. Turcotte said that considerable time could be saved by not debating the measure.