Move could be death blow to measure, a linchpin in governor’s State of the State address 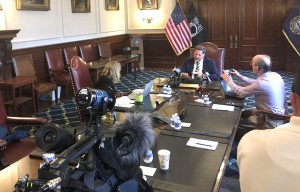 The NH House voted to table a major overhaul of zoning requirements Thursday, dealing a blow to an effort by Gov. Chris Sununu and housing advocates to speed up development in the state.

In a narrow 170-159 vote, the House laid Senate Bill 400 on the table, cutting off the possibility of extensive debate.

“This bill would effectively destroy local zoning,” argued Rep. Kurt Wuelper, a Strafford Republican, in final remarks ahead of the vote. “This bill would force – ‘encourage’ – many districts in our state to enact, to allow development in contravention of their master plans.”

Rep. Karen Umberger, a Conway Republican, spoke in favor of the bill. “We had teachers in my school district that couldn’t find a place to live and had to not accept a job,” she said. “Policemen, the firemen, the municipal workers cannot afford the housing in many of our communities, mine included.”

As originally proposed by Sen. Jeb Bradley, a Wolfeboro Republican, SB 400 would have included a number of regulatory changes to either incentivize or require towns to speed up permitting processes for new developments. Those changes included requiring a city or town to offer the same incentives for workforce housing that it does for housing for older residents, requiring a land-use board to give detailed written “findings of fact” explaining why it rejected a development proposal, and requiring zoning boards to approve or disapprove of an application within 90 days in most cases.

But in a divided vote last week, the House Municipal and County Affairs Committee opted to advance an amendment that would modify some key provisions of the bill and add on unrelated bills.

The committee tacked on legislation to allow voters to impose budget caps over their school districts, a measure to ban municipal mask mandates, and an amendment to reduce the responsibilities of town health officials and remove their authority over pandemic responses.

The tabling vote likely signals the end of the bill, which Sununu had championed in front of the full House and Senate during his State of the State address in February. The bill would require a two-thirds vote to be taken off the table, and House deadlines require that all Senate bills be approved by the end of the day Thursday.

On Wednesday, reacting to the amendments, Sununu expressed frustration, saying the “House really messed that bill up.”

But he argued that a separate program that passed this week, the “InvestNH” program, could still spur needed housing development in the state. That program would allocate $60 million in matched grants to qualifying developers, and $40 million in incentives to cities and towns to quicken approvals for developers, including $5 million to help cities and towns hire help in changing their zoning ordinances.

Sununu said that that program could encourage towns to make zoning overhauls even without a new statewide law.

“I think towns are going to be very much incentivized to capture a huge financial opportunity,” Sununu said. “So even though there could be certain regulatory barriers that are still in place, towns are very incentivized to move quickly through their own barriers to get projects done.”