Protocols for restaurants would start with outdoor dining 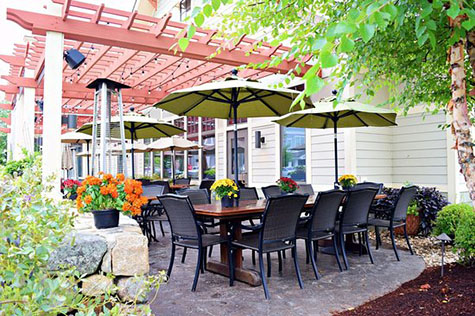 Dining out may literally be the first step in dining out again.

Addressing the Governor’s Economic Re-Opening Task Force on Thursday, Mike Somers, CEO and president of the New Hampshire Lodging and Restaurant Association, proposed dining al fresco as the first step of a four-phase plan for restaurants to begin catering to patrons when the stay-at-home order is lifted.

Somers said that restaurateurs are familiar with the public health issues surrounding the preparation and serving of food and accustomed to following regulations and undergoing inspections. He suggested that they would find complying with the protocols and procedures required to safeguard employees and customers from the virus “relatively easy.”

According to Somers, the health of employees would be monitored closely, and they would be outfitted with appropriate personal protection equipment and trained in cleansing and disinfecting procedures. Restaurants, he added, would be equipped with hand sanitizing stations and configured to ensure proper social distancing.

These measures, Somers said, would apply to the first three of four phases in reopening, and enhanced sanitization protocols would continue when restaurants resume routine operations. Nevertheless, Somers recommended that at-risk populations, the elderly and those with underlying medical conditions, should not patronize restaurants during the first three phases of the reopening plan.

‘Sooner rather than later’

Somers told the task force that phase one could begin with outdoor dining as early as May 5, the day after the governor’s executive order closing restaurants to the general public and restricting operations to take-out service is scheduled to expire. Outdoors, he explained, picnic tables could easily be spaced to ensure social distancing.

Restaurants would be opened to indoor dining with the second phase, when protocols to protect public health would remain in place. To provide for social distancing, reservations would be encouraged and diners would be asked to wait outside until their table is ready, and those tables would be arranged to ensure social distancing.

Restaurants would be prohibited from providing buffet service. And sittings would be limited to 10. The third phase would incorporate all the elements of the first two, but increase sittings to 12 or 13. And the fourth phase would mark a return to conventional operations, but with enhanced sanitizing guidelines.

Somers expected restaurants would require a week or 10 days lead time before reopening to replenish supplies and gather employees. And he said the industry would need to mount a marketing campaign to assure customers they could return to restaurants without jeopardizing their health.

“We are looking to get there sooner rather than later,” he said, without venturing a specific timeline.

Hotels and motels, Somers said, would follow the same federal Centers for Disease Control-recommended procedures as restaurants, especially those applying to social distancing.

Congregating in lobbies would be discouraged. Guests would check in digitally to limit contact with employees. Swimming pools and exercise rooms would not be opened until phase 3, and then only with strict sanitizing procedures.

Somers reminded the task force that, altogether, New Hampshire restaurants have suffered an operating loss of $800 million and shed some 70,000 employees.

“We’re in survival mode and just trying to get to the other side,” he told the task force.

After hearing proposals from different industries, the task force will begin framing recommendations, which will be reviewed by public health officials prior to their adoption.

Somers acknowledged that because all restaurants have different footprints, operating within the parameters of the public health protocols will have greater impacts on some than others. In particular, some restaurants may find they cannot accommodate a sufficient number of patrons to operate profitably. Somers said that in those circumstances some restaurant owners may be faced with difficult business decisions.