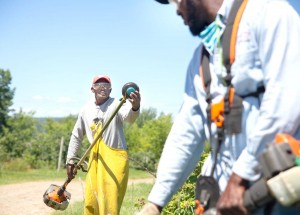 With businesses across all sectors of New Hampshire’s economy struggling to find enough workers, employers say another factor is contributing to this challenge: limits on foreign, seasonal employees working on temporary visas.

“Many businesses, especially in the seasonal hospitality sector, have relied on these workers to get through their peak seasons,” said Phil Suter, president and CEO of the Greater Keene & Peterborough Chamber of Commerce.

And while Suter said he did not know of any Monadnock Region businesses where the lack of international workers is the primary hiring challenge this summer, officials say it has become an issue across the state.

“Certainly, a reduction in J-1 and H2-B visas are putting a strain on a lot of businesses,” said Joe Dorion, director of workforce development for the New Hampshire Department of Business and Economic Affairs. These visa programs are among the most commonly used in New Hampshire, Dorion added, with the J-1 available to people participating in work- and study-based exchange programs, and the H-2B offered to temporary, non-agricultural workers.

One industry — summer camps — often turns to these visa programs to staff their programs. Ryan Reed, the director YMCA Camp Takodah in Richmond said the camp typically hires about 120 American staff and 30 international staff each summer.

“We struggled to recruit American seasonal staff for summer camp, and that was especially challenging because we were also not able to recruit international staff this year because of travel bans, visa restriction and embassy closures,” Reed said in an email.

Camp Takodah is now fully staffed for the season, Reed added, but in order to do so, the camp doubled its typical salaries.

“That resulted in increasing our staff salary expenses by nearly $400,000,” Reed said. “While the extra expenditures will have both short-term and longer-term financial consequences for our organization, we are grateful to be in a financial position to have that option. Many other summer camps in the area were not able to sustain such a significant salary increase — and I know they are still struggling to recruit staff.”

Nationally, Congress sets the limit of H-2B visas issued each year. And though the Biden administration has approved an additional 22,000 this year on top of the limit of 66,000, the Covid-19 pandemic has impacted the process for securing these visas.

“With Covid, a lot of consulates and embassies were closed to the public, so processing [visas was delayed],” Dorion said. “I also think there was a lot of uncertainty with everything throughout Covid. You couldn’t predict what the next day would look like, never mind several months down the road. … And then of course as things open, you have a backlog, and the process, from my understanding, takes a little bit of time.”

Mike Somers, president and CEO of the New Hampshire Lodging & Restaurant Association, added that Granite State employers that hire international workers — primarily in tourism-heavy areas like the Seacoast, North Country and Lakes Region — typically start the visa process in October or November to bring in workers the following summer. This year, he added, many overseas nations instituted international travel bans due to the pandemic that further muddied the visa application process.

“They either can’t get here, or they can’t get home,” he said of temporary foreign workers. “And then there’s the whole issue of embassies and consulates being backed up.”

For international agricultural workers in the Monadnock Region, though, temporary visas do not seem to be in short supply. Susan Jasse, owner of Alyson’s Orchard in Walpole, said she has hired three Jamaican employees, the same number she typically brings in for the summer. In Keene, Green Wagon Farm has not had any issues hiring four seasonal workers, also from Jamaica, according to co-owner Kaisa Jarrell.

The international employees at Alyson’s Orchard and Green Wagon Farm come to the U.S. on a different type of visa, the H-2A, which is specifically for agricultural workers.

Neither Dorion nor Somers said they have statistics on the number of temporary international workers coming to New Hampshire this year, but anecdotally, they said the figure is a fraction of what it normally is. Ultimately, Somers said workers coming to New Hampshire on J-1 and H-2B visas are still arriving for summer work, but with embassy and consulate backlogs, they might get here too late to have a big impact on the busy season.

“I’m not hugely optimistic we’re going to see a drastic change in the short-term,” he said. “I am hoping that we can get this sorted out so that as we approach next [summer] season, we’ll be in a much better position.”