New Hampshire county attorneys hold a lot of power, but most run unopposed

Despite a surge of interest in criminal justice reform, contested elections aren’t the norm 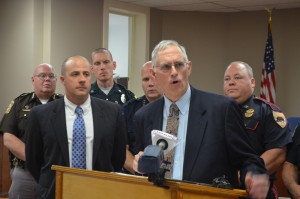 Marc Hathaway became Sullivan County’s county attorney in 1987. Back then, he said, alcohol was the main substance that landed people in trouble. But over his tenure, he’s seen heroin, fentanyl and, now, meth spread to this part of rural western New Hampshire.

Nearly every two years since then, Hathaway’s been re-elected as the county’s chief prosecutor with no opponent on the ballot. But this year, the head of the local public defender’s office is running against him, promoting a different approach for defendants struggling with substance use disorders.

This down-ballot race in New Hampshire’s second-smallest county highlights the stakes of an often-overlooked position: the county attorney.

As their county’s chief prosecutors, they and their deputies decide when to file charges in local criminal cases and, through the plea-bargaining process that resolves many cases, have significant influence over sentencing outcomes. Research has identified the choices prosecutors make as a key driver of the nation’s high incarceration rates. Some experts call them the most powerful actors in the criminal justice system.

“There’s no other role that could really make the kind of change that I want to make in the county,” said Jay Buckey, the public defender who’s challenging the Sullivan County incumbent.

Despite a surge of interest in criminal justice reform in recent years, contested county attorney elections in New Hampshire still aren’t the norm. As in past years, most incumbents this election season are running unopposed.

‘Re-elected as a matter of course’

Nationally, some races have attracted attention over the past decade as so-called “progressive prosecutors” have won in Boston, Philadelphia and other major cities on promises of reform — and, in some cases, faced backlash. But high-profile races are the exception. One recent study found that only 30% of prosecutor elections were contested nationwide — and even less in smaller, rural districts.

That undermines the accountability elections are supposed to provide, said Carissa Byrne Hessick, who directs the Prosecutors and Politics Project at the University of North Carolina School of Law and co-authored the paper on prosecutor elections. It also limits public debate about what the community wants from prosecutors, she said.

“Seventy-five percent of people in these smaller counties are not facing anyone at any point on the ballot,” she said. “They’re just getting re-elected as a matter of course. It’s a really important position that not enough people think about.”

In New Hampshire, fewer than one in three county attorney races going back to 2000 offered voters a choice. The state’s three largest counties — Hillsborough, Rockingham and Merrimack — were more likely to see competition, with half or more of their county attorney elections being contested. Meanwhile, several other counties have gone a decade or more without one.

Observers of New Hampshire’s criminal justice system listed several possible reasons for this lack of competition. The pool of candidates is naturally small, limited to attorneys who live in the county. Experienced lawyers can generally make more in private practice, without the job insecurity that comes from having an election every two years. The races also don’t seem to be a focus of the two major parties’ efforts.

“It’s a really important position that not enough people think about, in terms of the amount of power that county attorneys or district attorneys have in setting prosecution priorities and strategies,” said Steven Briden, a former deputy prosecutor in Carroll County who ran unsuccessfully for Rockingham County attorney in 2020.

Briden, now a federal prosecutor in Oklahoma, said he ran in part to spark those discussions.

“I just thought that it was important to have some kind of dialogue about what the community priorities really should be,” he said.

In Sullivan County, Buckey said his experience as a public defender motivated him to run. He thinks the county doesn’t have enough services for people struggling with addiction who get arrested.

Specifically, Buckey said he would push for Sullivan County to open a drug court — an alternative to prison that involves court-supervised treatment and behavioral therapy for people whose offenses are linked to an addiction. Sullivan is the only county in New Hampshire without one.

Hathaway, the county attorney, has also seen the damage drugs have caused in his community and believes rehabilitation is important. But he doesn’t think drug courts impose enough accountability when people reoffend or continue to use. He said that undermines public safety.

“Unfortunately, drug court turns out to be a very forgiving entity, far more forgiving than something should be in the criminal justice system, when you’re dealing with the high-risk, high-need offenders that drug court services,” he said.

Hathaway said a better model already exists locally. The program, called Transitional Re-Entry and Inmate Life Skills, or TRAILS, is based at the county jail and starts with 90 days of intensive treatment and programming while the person remains incarcerated. The person is then gradually reintegrated into society under continued supervision.

“The level of accountability in TRAILS, and the quality of the programming in TRAILS, is vastly superior,” he said.

Buckey sees it differently. He said the drug court model includes measures to respond to the relapses and mistakes that often come with recovery, and views its community-based approach as more effective in the long run than one that keeps people incarcerated while they start their treatment.

Outside of Sullivan County, a handful of other New Hampshire counties have contested races this year.

Nicholas Sarwark, a defense attorney and former chair of the national Libertarian Party, is challenging Hillsborough County Attorney John Coughlin. Sarwark said he’d do a better job of managing the office, which has seen high turnover and was sanctioned last year for missing deadlines in multiple cases in what a judge called a “systemic breakdown.”

Coughlin, who was elected in 2020, has pointed to the office’s high caseloads and said he inherited problems from his predecessor. He said he has made organizational improvements during his time in office.

This year, races in six New Hampshire counties appear to be completely uncontested.

In Rockingham County, Portsmouth defense attorney Rich Clark is running to reform an office that he alleges wrongfully indicted him in 2019. The charges were dropped two years later due to “insufficient evidence,” according to the New Hampshire Union Leader.

There’s also a contest in Coos County, where Roger Sylvestre of Clarksville, is challenging incumbent John McCormick. The NH Bar Association says it has no record of anyone by Sylvestre’s name being a member of the bar, a requirement for the job. NHPR attempted to reach Sylvestre by phone for comment and has not received a response.

Races in the other six counties appear to be completely uncontested.

“It’s still pretty uncompetitive in smaller places,” he said. “But you know, the trend is a positive one. And I think that’s because people are starting to notice … that prosecutors are not all the same, that they make policy choices.”

Buckey hopes to see more people run for county prosecutor in the future.

“One of the real positives of running, win or lose, is that it’s generated a discussion on these topics,” he said. “And I think the discussion’s important.”

This article is being shared by partners in the Granite State News Collaborative. For more information,, visit collaborativenh.org.