New Hampshire comedians look for laughs and gigs amid Covid

They’re learning what’s funny, and not, during the pandemic 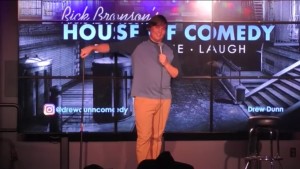 Comedian Drew Dunn of Nashua has been picking up standup gigs where he can during the pandemic as well as making videos for his YouTube channel. (Courtesy photo)

This was supposed to be the year that Drew Dunn took his standup act on a national tour take his comedy career to the next level.

Dunn has been doing stand-up for the past seven years; performing has been his full-time gig for three years. Last year he got his big break at the Just for Laughs Festival in Montreal, he said. After performing, he fielded several offers from agents and eventually chose a New York City-based talent agency.

Then, everything shut down.

“When Covid hit, all the dates started to fall away,” Dunn said.

At the time, Dunn and his wife were planning a move to New York City. They decided to stay put for now, and rather than touring Dunn has been focused on making content for his YouTube channel and Instagram. His career is still moving, just at a slower pace than he anticipated.

“It’s holding back everybody,” Dunn said.

Despite that, he finds it easy to be patient right now.

When the pandemic hit in March, gigs for standup comedians came to a screeching halt. Comedian and talent booker Rob Steen of Manchester normally books shows throughout the Northeast and on cruise ships. He saw about 1,700 shows canceled this year.

But by mid-summer, when stay-at-home restrictions were lifted, comedy shows returned as one of the safer options for live entertainment – with only one person performing for socially distanced and stationary audience members.

None of the comedians who spoke to the Collaborative have heard of people getting Covid from attending a comedy show. Despite that, Juston McKinney, of Newmarket, is encouraging his high-risk fans to stay home for now.

Even when shows are happening, they are nothing like the pre-pandemic norm. McKinney, who has made a comedy career appearing in movies, late-night shows and other TV, is used to headlining larger New Hampshire venues. While he has performed at some of these venues recently, including at The Palace Theatre in Manchester, crowds have been much smaller because of social distancing.

“I would say, wow, normally having 100 people in a venue this size would be disappointing, but in 2020 it’s a sellout,” McKinney said. “I’ve never done those rooms with so few people in them before.”

When his own comedy club in Manchester was too small to adapt to Covid restrictions, Steen started booking magicians and comedians to perform at Chunky’s Cinema Pubs in Nashua, Manchester and Pelham. He already had a relationship with Chunky’s, which hosted a monthly comedy night, so it made sense to partner with the cinema chain and increase the frequency of the live comedy shows to every weekend, he said.

“Rob has provided a lot of work since things have started up,” said Manchester standup comedian Paul Landwehr, who has had about 60 shows canceled since March.

Chunky’s is able to accommodate Covid audiences because it has the room to spread people out.

“They can’t do movies because there are no new movies coming out,” Steen said. “The audiences have been awesome; they have been really supportive.”

Comedian Matt Barry, who has performed at the Chunky’s shows, agrees.

“Comedy during the pandemic has certainly been challenging and there are a lot less shows than there were before, but that makes the shows that we do get a lot more special,” he said. “When a venue goes out of their way to accommodate a comedy show, it just shows how much that venue really cares about comedy and providing entertainment to its patrons.”

In some cases, comedians – like many other professionals –have turned to virtual platforms.

Dunn is focused on creating online content and picking up gigs when he can, and McKinney has even hosted Zoom performances.

“It feels like it’s going to be a very tough winter to be a comedian,” McKinney said. “Thankfully I’ve been supplementing my live stuff with virtual shows.”

When they do get to take the stage, comedians are balancing how many Covid jokes to make, and what material is off-limits. Steen said there are certain things about the pandemic that are not funny to audiences in his experiences over the past year.

“When somebody’s lost a loved one to Covid, no matter how much time has passed they are not going to find a joke about Covid funny,” Steen said.

On the other hand, the shared circumstances of the pandemic have led to comedic gold.

“If you break down what comedy actually is, it is not making fun of tragedy, but making it palatable so that people can deal with the tragedy,” Steen said.

“We all relate to it,” Steen said. “It resonates.”

Dunn, who has been traveling the country for gigs, has joked about being tested for Covid, but mostly he relies on material not related to the pandemic or politics.

“People want that escape from everything,” he said.

McKinney jokes about remote learning and other near-universal pandemic difficulties.

“They want to know they are not alone. Very few people are having a good year,” McKinney said, adding he is no exception.

As the world waits for a Covid vaccine that can make returning to comedy clubs safe for everyone, comedians are still providing a bit of a distraction, even from afar.

“I really think comedy can unite people, so even though we are not together, comedy can bring us together,” Landwehr said. “They hunger for comedy relief. They want to laugh again and they want a break from the news, social media and everybody yelling at each other.”

This article is are being shared by partners in The Granite State News Collaborative. For more information, visit collaborativenh.org.