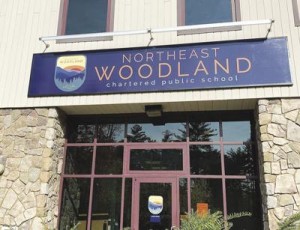 Opened in 2020, Northeast Woodlands Chartered Public School in Conway was opened in 2020.

Enrollment in New Hampshire’s public charter schools grew by 8 percent over the last school year, according to new figures released by the NH Department of Education. At the same time, enrollment in public schools has dropped overall.

There are currently 30 public charter schools statewide, serving 5,256 students, up from increase  percent from 4,850 last year, according to the NH Department of Education. That number doesn’t include online education, or full-time VLACS students, which are expected to serve 600 students this school year.

Between fall 2009 and fall 2019, public charter school enrollment nationwide more than doubled, from 1.6 million to 3.4 million students, according to the U.S. Department of Education.

At present, charter school students represent slightly more than 3 percent of New Hampshire’s 161,755 public school students — a total that’s declined by 10,000 since before the pandemic.

Over the past 20 years, New Hampshire’s school population has shrunk by almost 46,000 children. Potential reasons include high costs of housing and living and New Hampshire’s low birth rate, 8.8 per 1,000 — the second lowest in the nation and in New England, the region with the oldest population and the fewest births per capita.

Three years ago, New Hampshire was awarded $46 million in grants from the U.S. Department of Education to expand this state’s charter school program, with a focus on at-risk students and expanding education innovations.

Since 2020, five charter schools have opened and four have closed. Northeast Woodlands Chartered Public School in Conway opened in 2020. North Star Academy in Ossipee, the second in the Lakes Region, is planning to admit students in fall 2024.

As tuition-free public schools authorized by the New Hampshire State Board of Education, charter schools provide a choice for families seeking an affordable alternative to traditional public schools. They tend to offer small class sizes and strategies designed to help students reach their personal academic potential. Each has a unique focus and is based on needs and interests in the community. Admission is by lottery when the number of applicants exceeds a school’s available space.

The Academy of Science and Design, a public charter school in Nashua, has a 100 percent graduation rate. Others that focus on children at high risk for dropping out may have considerably lower rates. According to a report this month from NH DOE, seven of the 10 New Hampshire high schools designated as Comprehensive Support and Improvement schools were charter schools — schools with less than a 67 percent graduation rate and those in the bottom 5 percent based on measures that include academic achievement, English language proficiency and equity.

Public charter schools receive district and state funding based on their enrollment through a combination of federal grants, private fundraising and taxpayer dollars. Misperceptions linger about whether they subtract support from mainstream public schools. Under the current formula, one-third of a school district’s per pupil spending follows a child to a public charter school, while the other two-thirds remains in the district, available for traditional public schools. This means that, for example, if a New Hampshire school district spends $9,000 per pupil, $3,000 goes to the public charter school student while $6,000 remains in the district.

A report in June from the National Center for Education Statistics, based on data available from 30 states, found that between 2007 and 2018, public charter schools spent nearly 200 percent to 300 percent more on non-salary items per pupil (including books, supplies, technology, and teacher training) than public non-charter schools, but the reporting did always reflect all school levels.

The NCES report, based on the Civil Rights Data Collection, found that in 2017-2018, per-pupil spending among public non-charter schools fell just under the national average of $6,500, compared to an average of $8,900 per public charter school student.