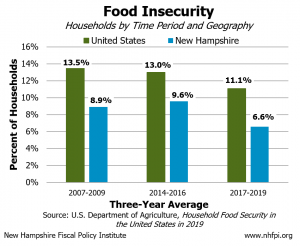 According to data released Sept. 9 by the U.S. Department of Agriculture, food insecurity levels in New Hampshire continued to decline during 2019, prior to the onset of the Covid-19 crisis.

The report outlines the trends of reduced food insecurity in the nation and in New Hampshire, declining from the higher levels resulting from the Great Recession of 2007 to 2009. Overall improvements to the state economy through 2019, along with the effectiveness of key nutritional aid programs, contributed to lower levels of food insecurity, although the benefits of the economic recovery did not reach all Granite Staters in an equal or timely manner.

Although food insecurity levels declined through the years preceding 2020, the current crisis facing Granite Staters is not reflected in these 2019 data. Recent economic pressures on many individuals and families with lower incomes in New Hampshire have been severe, and current levels of food insecurity are very likely to be substantially higher.

Data in the USDA report are collected through the Current Population Survey’s Food Security Supplement, questionnaire that is distributed to households throughout the country to estimate food security at national and regional levels.

According to the USDA, food insecurity means that “households were, at times, unable to acquire adequate food for one or more household members because they had insufficient money and other resources for food.” To collect sufficient information to reliably estimate the percentage of households that are food insecure, three years of survey data are combined at the state level to calculate an estimate. This three-year time span is necessary at the state level to provide adequate data for meaningful analysis, which is particularly important for small population states like New Hampshire.

This decrease is a statistically significant change, indicating a high probability the sample data reflects an actual change in conditions even when accounting for the limited sample sizes and the resulting margins of error.

The 2007-2009 period, which includes the Great Recession but is prior to the low point in the state’s economy, had an estimated food-insecurity level among households of 8.9% in New Hampshire.

The continued decline in estimated levels of food insecurity in 2017-19 may be attributed to the growing state economy at the time and the effectiveness of nutritional aid programs, such as the Supplemental Nutritional Assistance Program, or SNAP.

However, the Covid-19 has resulted in extensive risks to the health and economic well-being of many Granite Staters. Particularly notable are declines in employment and losses in income that may have resulted in, and continue to result in, financial pressures on individuals and families, which may result in increased food insecurity.

In April, the U.S. Census Bureau collected over 12 weeks the first phase of weekly survey data targeted at understanding the effects of the Covid-19 crisis on households. A second 12-week phase of surveys and data collection has just begun.

Based on responses from the first phase of the survey, the Census Bureau has estimated widespread income losses among Granite Staters since the pandemic began.

Over these initial 12 weeks, nearly half of New Hampshire respondents reported a reduction in household income from employment since March 13. During mid-July, about one in five households expected a decline in incomes during the next four weeks because of the pandemic.

The first release of data from the second phase of the survey indicates that many of the challenges experienced by Granite Staters lingered into late August as well. Over the period from Aug 19 to 31, about one in five households expected a decline in income during the next four weeks because of the pandemic, and about 5% of households indicated they sometimes or often had not enough to eat in the last seven days.

Michael Polizzotti is a policy analyst for the New Hampshire Fiscal Policy Institute, which is sharing articles with partners in The Granite State News Collaborative. For more information, visit collaborativenh.org.