Neither rain, nor sleet… but Covid?

U.S. Postal Service once again fights for its survival 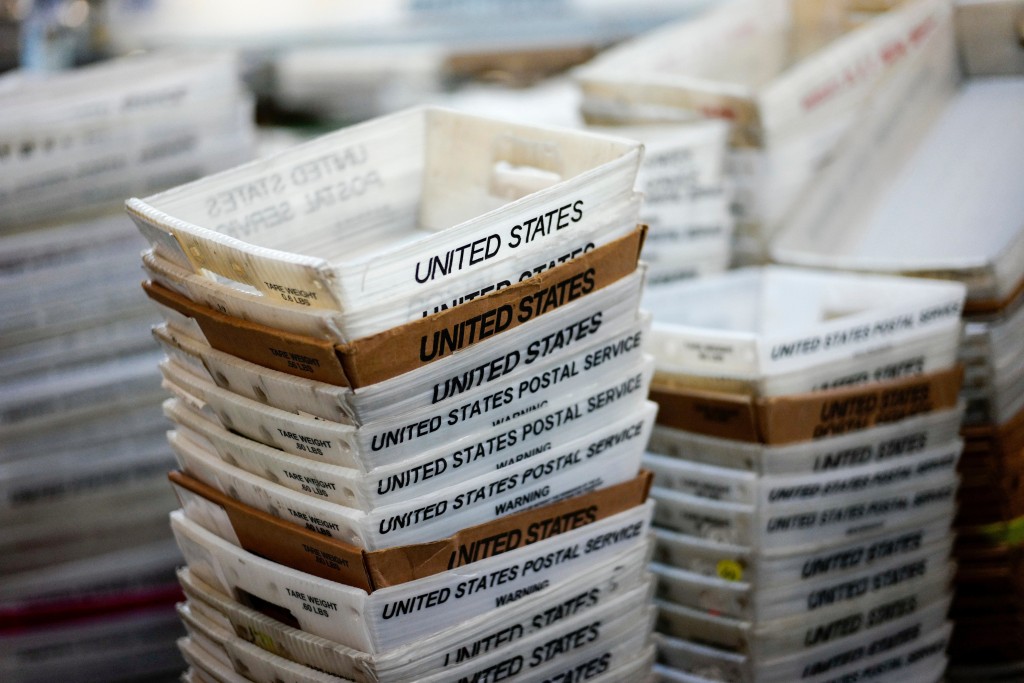 Even before the mid-March stay-at-home orders and shutdowns of restaurants, retailers, gyms and other businesses that typically advertise in the mail, USPS reported a net loss of $748 million in the first quarter of 2020.

Now, the Postal Service estimates the Covid-19 pandemic will increase the organization’s net operating loss by more than $22 billion over the next 18 months and by more than $54 billion in the longer term, “threatening our ability to operate,” said Steve Doherty, USPS strategic communications specialist for the Northeast.

“The Postal Service relies on the sale of postal products and services to fund our operations, and these sales are plummeting as a result of the pandemic,” he said. “The sudden drop in mail volumes, our most profitable revenue stream, is steep and may never fully recover.”

In fact, the USPS says it may not be able to make payroll and continue mail service uninterrupted past September without a financial relief package — and down-the-line postal reform. 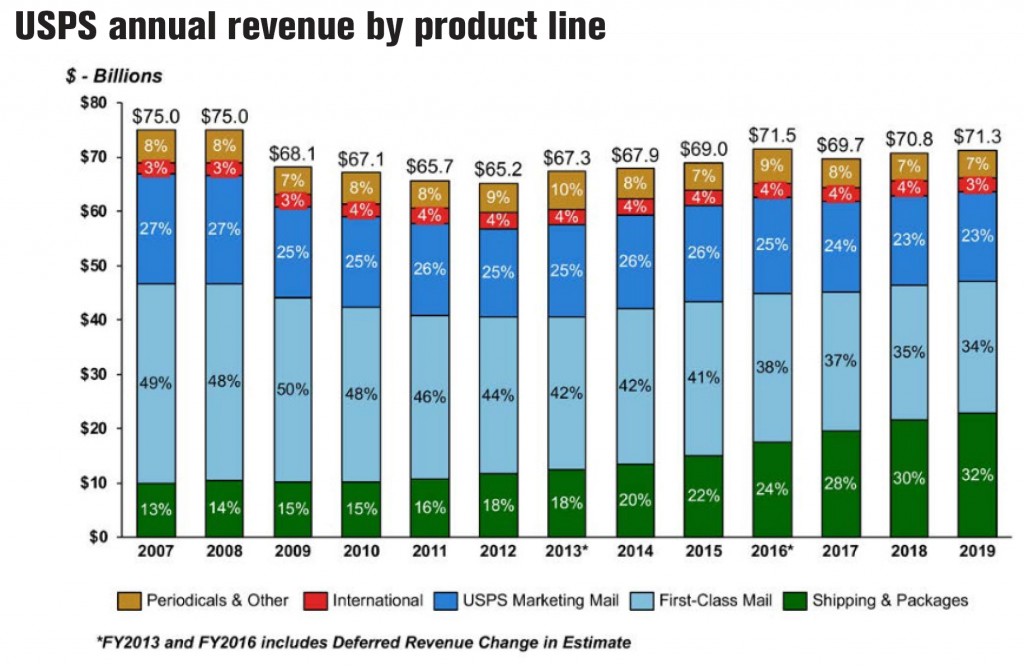 The economic fallout from Covid-19 only furthers existing financial problems facing the Postal Service, which has been hit by declining mail volume and, notably, a mandate from the 2006 Postal Accountability and Enhancement Act that requires it to create a $72 billion fund to pay for the cost of its post-retirement healthcare benefits 75 years into the future — something that no other federal agency or private corporation has to comply with. ($387 million of its first-quarter net loss is attributed to controllable losses including this provision.)

Over the past 10 years, the Postal Service has experienced a nearly 30% drop in first-class mail, its most profitable product, and more than 7% decrease in direct mail advertising. And economic recessions only dampen mail volume even more.

During the 2008-09 recession, for example, “advertisements for credit cards dropped and never came back as strong,” said Phil Tabbita, senior manager at the American Postal Workers Union. This trend could be replicated in other industries, particularly retail advertisements. 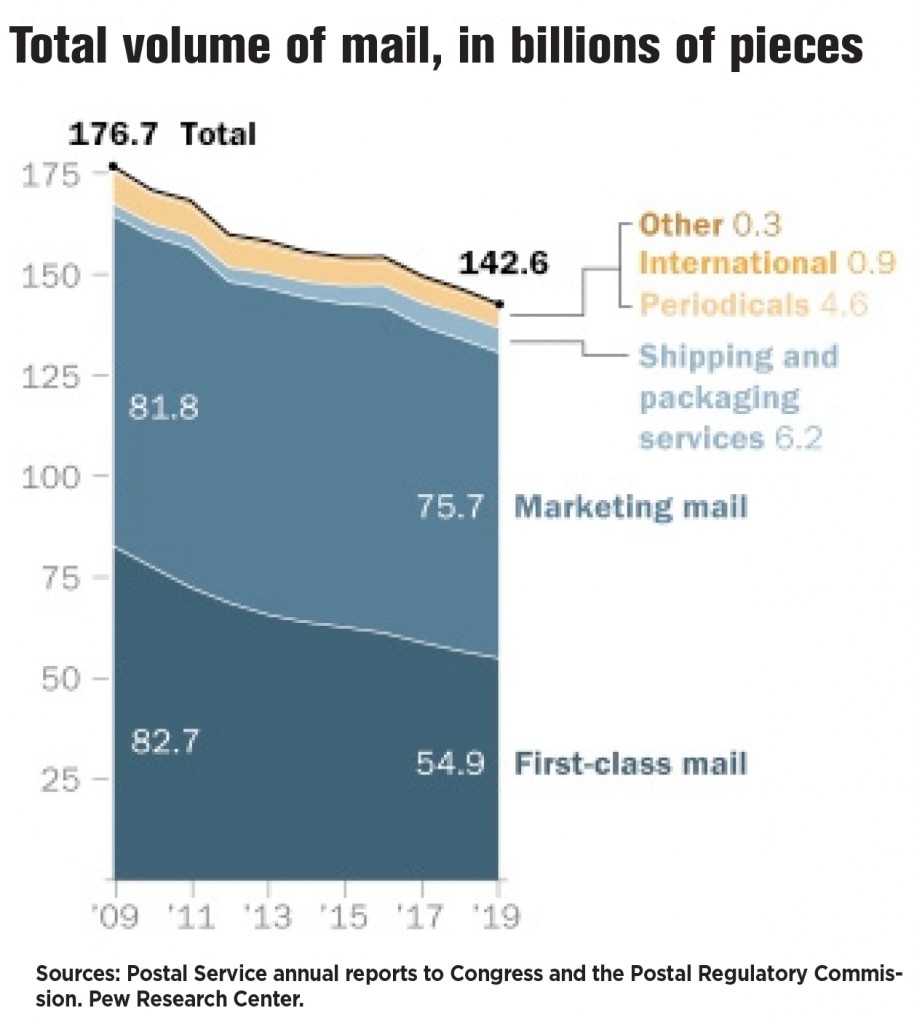 “I don’t think we have seen the bottom fall out of mail yet, the way it’s likely to,” said Tabbita, saying 2020 is a unique year with two sources of mail that would only temporarily boost numbers: the U.S. Census and 2020 election.

While April figures that would reflect the decrease in mail volume have not been released yet, Kevin Boyarsky, co-owner of NH Print and Mail in Concord, has experienced it.

Direct mail from businesses, such as restaurants, make up some of Boyarsky’s customer base, but most of his customers are nonprofits, which halted mailings in mid-March.

“There’s not a lot of fundraising going on right now because of financial conditions,” said Boyarsky, who noted some nonprofits were about to mail notices of upcoming fundraising events when stay-at-home orders took effect in New Hampshire and around the country. Other for-profit customers, such as insurance companies, have also cut down on mailings.

But, despite the decline in its use since the days before the internet, that doesn’t mean mail is obsolete.

“Mail is a funny thing,” said Boyarsky. “People don’t think about the mail service, but when they need it, they need it.

Even though a lot of billing has gone electronic, there’s still a fair amount of mail that goes out, and I call it ‘crucial correspondent mail’: insurance claim forms, medical type forms — first-class mail that is crucial for a person’s financial information. The volume has dropped, but there’s still a good piece of it going through the mail system.”

And there has been a bright spot for the Postal Service: a 25% increase in package delivery — a direct result of stay-at-home orders and the shutdown of many retailers.

The four members of New Hampshire’s congressional delegation wrote a letter to congressional leadership in April asking for financial relief for the Postal Service.

“The country’s experience during this pandemic is demonstrating the degree to which Americans, especially seniors and the immunocompromised, depend on the Postal Service for essential deliveries, including medications, stimulus checks and tax refunds,” read the letter. “U.S. businesses, especially small and medium-sized businesses that are suffering greatly because of lost revenue because of the coronavirus also rely on receiving goods through the USPS’s affordable pricing structure.”

The letter is pushing for relief beyond what was provided in the CARES Act, which allows the Postal Service to borrow up to $10 billion from the U.S. Treasury to cover operating expenses, on the condition it raises package and shipping rates.

The U.S. House has passed a second round of coronavirus economic relief, called the HEROES Act, which includes $25 billion in immediate emergency funding. The Senate has yet to announce a bill, and leadership said it doesn’t expect to take up a measure until after July 4.

The political environment has members of the American Postal Workers Union concerned, said Emily Harris, spokesperson for the APWU in Washington, D.C.

Last month, President Trump appointed Louis DeJoy, a significant political donor, as postmaster general. And recommendations toward partial or full privatization of the Postal Service are still fresh from a 2018 Office of Budget and Management report.

“The pieces are in play as it were,” said Harris.

Privatization aside, Doherty of the Northeast USPS said the Postal Service could pivot easier if congressional approval on postal rates were removed. (Most prices increase based on the Consumer Product Index, often an increase of about 2%.)

“For us to go up a penny on the cost of a stamp is a process that takes a couple of years, so we don’t have the flexibility to be able to react to the market as quickly as our counterparts in the private sector, and that’s part of what we’re looking for is a business model that allows us to be competitive in our key products,” he said.

Whenever there is a proposed rate increase by the Postal Rates Commission, it is lobbied against by mailers facing significant financial hits due to their mail volume, said Tabbita of the APWU.

In April, Trump called for a fourfold increase in the price to ship packages through the Postal Service, which New Hampshire’s congressional delegation denounced along with the postal workers union.

Trump’s main target in his demand is Amazon, which he claimed in an April 2018 tweet is “costing the United States Post Office massive amounts of money for being their delivery boy.”

“[Amazon owners Jeff] Bezos is making a fortune, but not at the Postal Service’s expense,” said Tabbita.

But “the Postal Service can [deliver to the last mile] because it has the density and it’s going to every address anyways,” explained Tabbita. “It’s not sending an extra truck and extra person to deliver a package — the Postal Service is already there.”

Raising prices is a tricky balance. If the Postal Service raises them too much, it will motivate UPS and FedEx to raise their rates and build out their ground networks in certain areas — a trend that already started last year and has hit the Postal Service’s bottom line, said Tabbita.

That drives home the point that the Postal Service must be a public service with affordable rates, argued Janice Kelble, legislative director of the New Hampshire chapter of the American Postal Workers Union.

“I don’t think any private business is going to do that [deliver to the unprofitable areas]; they’re going to deliver the cream of the crop,” said Kelble. “It matters to have the Postal Service maintain the ability for the public to communicate. It’s for the public good — it’s not for making big profits. Like the fire department, you don’t just serve the houses that are convenient, you don’t get to pick and choose.”

Yet it’s the Postal Service’s universal service obligation and congressional oversight that prevent it from taking the steps a private business would follow to achieve and maintain financial solvency, some argue.

He points to the large number of post office locations that are sometimes in close proximity to each other.

“Feasibly, you could close one or two post offices, and a retail customer may need to travel another two to three miles, but it would save money in employees, vehicles, building rent and upkeep,” argued Boyarsky. “The volume of mail has dropped tremendously, and you’ve got to reduce your costs — if you don’t it’s not a viable business model. You’ve got to run it somewhat like a business and you’ve got to get those costs down.”

USPS has tried that with little success, as members of the community voice concerns to their congressional delegation.

“They see the post office as part of their identity,” said Doherty. “If you try to take that out of a local community, we’ve found you get a lot of pushback.”

That being said, when it was proposed, Boyarsky reached out to New Hampshire’s congressional delegation to oppose the shutdown of the Manchester bulk mail facility, which would then make the nearest facility in Portland, Maine, or Boston, hurting his business and other mailers in New Hampshire. In 2011, the bulk mail facility in Portsmouth was closed.
Another option to work toward profitability is reduce the number of delivery days.

If a private mailer were to deliver first-class mail, it would require “enough pieces per stop to make that profitable,” said Tabbita, “and that means they may need to coalesce six days of mail into two or three days.”

“It would be a huge savings to the Postal Service,” said Doherty, who explained it would reduce letter carrier positions.

“It was put out there for one possibility, for cost-savings, and it was quickly shot down by Congress. Residents wanted their mail six days a week. Businesses want their mail on Saturdays.”

Tabbita of the postal workers union isn’t sold on the idea that privatization will save the Postal Service because, as defined by the Trump administration, it would mean removing products and services that are not profitable and maximizing those that are profitable — and that’s counter to the purpose and structure of the Postal Service.

“The problem with that theory is the Postal Service, being smaller and offering less services, can’t be profitable because it’s going to have to keep this huge network up and it can’t do that if it doesn’t have a substantial array of products and good volume,” said Tabbita.

“There’s always a feeling the private sector can do things more efficiently — the Postal Service could be more efficient, more profitable, it should do certain things and not other things,” he added. “I think most of that is ideological. When you put the ideology aside and you look at the numbers and the practicality, the ideology just doesn’t hold up.”