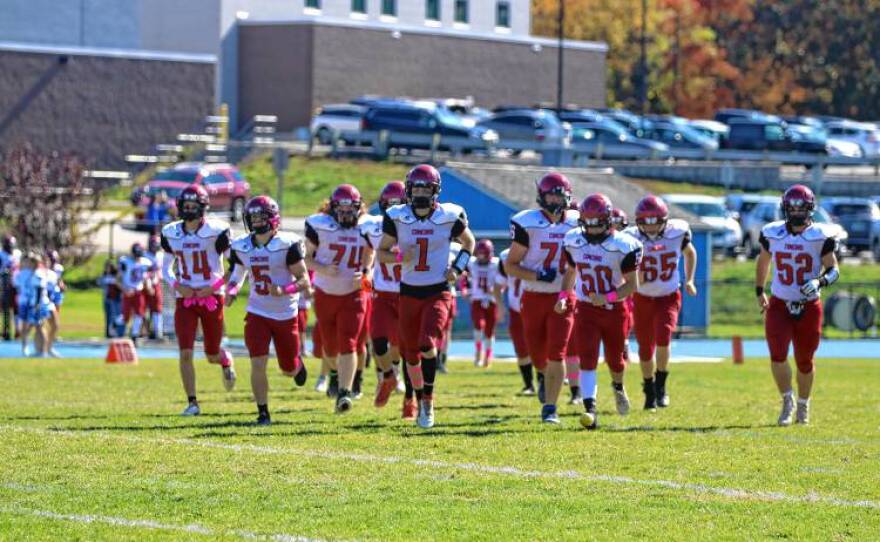 High school athletes have new opportunities to be compensated for their athletic skills, as long as their endorsement doesn’t mention their school or the NHIAA. (Concord Monitor photo)

The NIL wave sweeping college sports has hit New Hampshire high schools. Short for name, image and likeness, NIL refers to the ability of amateur athletes to receive endorsements and other forms of compensation as a result of their athletic fame. What began as a major push in the NCAA world in the summer of 2021 has now trickled down to the high school level.

In late December, the New Hampshire Interscholastic Athletics Association adjusted its rules to permit student athletes to financially capitalize on whatever fame their NIL might generate.

Based on the NHIAA’s eligibility criteria modifications, student athletes are now able to maintain their amateur status even if they receive up to $1,000 in prize money (or prizes of equal value) for competitions. The rulebook also states that student athletes cannot capitalize “on athletic fame in affiliation or connection with activities involving the student’s school team, school, or NHIAA,” but that, “This provision is not intended to restrict the right of any student to participate in a commercial endorsement provided there is no school team, school, or NHIAA affiliation.”

In other words, student athletes who participate in athletics at NHIAA-sanctioned schools are allowed to receive sponsorships, so long as that endorsement doesn’t mention or involve the school the student athlete plays for or the NHIAA.

New Hampshire was one of six states to amend its NIL laws in December and is now one of the 26 states to have formally clarified the right of public high school students to take advantage of their NIL. Vermont is now the only state in New England that has not made such clarification for high school athletes.

To Michael McCann, a professor at the University of New Hampshire Franklin Pierce School of Law, a leading expert on the impact of NIL, this simply clarifies what these athletes already had a right to do.

“It’s significant because it reflects another state to allow high school athletes to enjoy a right – I would say – that they already have, which is a right of publicity,” he said. “I think what the state athletic association is doing is sort of putting their own rules in compliance with the law. Other states have done this as well. That, to me, is the starting point: It’s the right thing to do.”

The “right of publicity” is a simple idea, as McCann explained in a testimony to the U.S. Senate Committee on Commerce, Science and Transportation.

“This is the right to control the use of what makes us who we are. Our name. Our appearance. Our voice. Our signature,” he explained in his written testimony in 2021.

From a legal perspective, McCann argues that student athletes at any amateur level have this right and have always had this right. Think about it from the perspective of other talented students who might not play sports.

“A student who is a talented musician, actor, artist, influencer, cheerleader or e-sports player can typically earn from their right of publicity without endangering a scholarship or jeopardizing a team or coach,” McCann’s testimony said. “They merely exercise a long-established right. It’s no big deal and, like other college students, they can juggle their studies, too.”

The same principles apply at the high school level as well, even if the market is smaller.

For New Hampshire high school athletes, the impacts likely won’t be profound, but it simply provides an opportunity that wasn’t previously afforded to them.

“It gives athletes chances to be marketable, even for things like sponsoring a camp or getting free pizza, whatever it may be,” McCann said. “Most athletes don’t continue on into college and almost none continue on into the pros, so while they’re relatively excellent at their sport, I think it gives them a chance to make something from that.”

Nationally, the NIL landscape has been muddied because no federal legislation exists to provide guidance for all states to follow. Even with about half of the states implementing laws permitting NIL at the high school level, there are still different caveats that exist in each state. One general commonality among them though? Athletes cannot use their affiliation with their schools or athletic associations in any deals.

That might seem counterintuitive – wouldn’t the athlete be likely to gain recognition because of their affiliation with their school? Perhaps so. But as McCann explained, it’s pretty standard language to see in NIL laws.

“If I’m the school, I don’t really want our brand name out there in ads,” he said. “The school wants to control that, I imagine.”

The next generation of athletes

On the practical side, the NHIAA’s update to its eligibility criteria could help organizations like Concord Crush Youth Lacrosse, which runs camps where college lacrosse players come and help out.

With the clarified policy, high school athletes in the state could now help out at sports camps like this or run their own camps and capitalize financially on their NIL.

Concord Crush co-founder Scott Daniels already had to deal with some of the challenges that existed pre-NIL for college students.

“We would go get players to coach these camps that were very good college players, and we would sometimes get input from either the players or the schools that they went to; they would allow us to use the player’s names, but we couldn’t advertise that they were affiliated with their particular school,” Daniels said. “It was always funny to land in the middle of a legal NIL issue when all you were trying to do was pass on experience of the older members of your community to the little ones.”

Though Daniels himself no longer runs the Concord Crush camps now that his kids are in college, there might be more opportunities for top-tier high school students to work for camps like this and be able to make some money because of their athletic talents.

And beyond athletes who might be among the best at their sport in the state, the opportunity also now exists for athletes who build up personal brands through social media followings to take advantage of their fame.

“There are social media influencers who may or may not be athletic,” McCann said. “How about e-sports players? There’s all sorts of folks that could benefit from NIL that are not necessarily a soccer player or a lacrosse player or a basketball player.”

Though the number of New Hampshire high school athletes who will actually reap the benefits of NIL is hard to estimate, it adds another layer to what coaches might have to deal with.

“The biggest lesson I think you want to instill in your athletes at this level is being able to be part of a team and be a good teammate and work toward a common goal and work together,” Concord football head coach Jim Corkum said. “I just worry that NIL stuff at the high school level maybe puts a little bit too much more focus on the individual instead of the team.”

Still, Corkum said he’s glad the NHIAA has created some clarity, given how influential NIL has become across the country.

“It’s good forward thinking by the NHIAA to be looking at this,” he said. “It’s something that’s certainly a big topic within our society and how that trickles down to the high school level.”

But that’s not to say there won’t be bumps in the road. As Corkum said, coaches might run into situations where one player becomes overly focused on securing sponsorships and isn’t focused on helping their team.

“Because the deals are small, it’s hard to justify hiring a lawyer,” McCann said. “If you’re going to get paid $100, you’re probably not going to go hire a lawyer who would charge more than that. I think this is a concern just more broadly with NIL. When the deals are small, it may be difficult for some who would benefit to get representation to negotiate a contract. This is something that over time, the market will play out. … I’m sure there will be issues, but it’s sort of the nature of small-value deals where it can be hard to get to secure representation.”

Overall though, the NHIAA’s decision now provides more opportunities than previously existed for student athletes across the state. Whether it creates robust financial opportunities for some, modest opportunities for others or doesn’t change how state high school athletics operate, it puts New Hampshire on a level playing field with the 25 other states across the country that have already moved in this direction.

“I think that New Hampshire, understandably, waited to see how other states handled this issue. New Hampshire didn’t have to be first,” McCann said. “High school sports is not as big of an industry, in terms of the commercial aspects to it. I don’t think there was a need to rush, and I think the state athletic association looks like they did their due diligence and waited.”