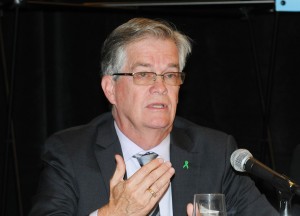 Bill Brewster, vice president of the New Hampshire market for Harvard Pilgrim, says his firm has ‘made concessions allowing employees to remain covered under their group health plan.’

The health insurance market in New Hampshire, in which a majority of residents are covered by employers’ group plans, could face big challenges as layoffs accumulate in an economy slowed by the Covid-19 pandemic.

That uncertainty could expose tens of thousands of residents to changes in their health insurance premiums, coverage and providers. It could also leave more Granite Staters without insurance. In 2018, the uninsured rate was 5.7%.

The root cause of the uncertainty: the Covid pandemic. In New Hampshire as of Sunday, 1,864 residents had been diagnosed with Covid-19, 101 were currently hospitalized and 60 had died. Identifying and treating Covid has generated new costs for consumers and insurers, even as revenue has been slowed by measures to conserve protective equipment and isolate infected patients.

An analysis issued April 15 by the Peterson-Kaiser Health System Tracker, a nonprofit industry observer, noted that with the spread of the coronavirus in the United States “private health insurers and government programs could potentially face higher healthcare costs.”

But where the impact would be felt remains uncertain, according to the analysts: “The extent to which costs grow, and how the burden is distributed across payers, programs, individuals, and geography are still very much unknown.”

Repercussions have already been felt in the state economy, where a stay-at-home order is in effect until May 4. One shock to the system: Since March 15, over 141,000 New Hampshire residents filed new claims for unemployment insurance.

Spokespeople for leading insurance companies in the New Hampshire market declined to comment on how the steep drop in the state’s employed population might affect their future coverage, premiums and business models.

“The carriers are all pretty hesitant to draw any conclusions,” Brannen said.

But long-term job losses could reshape a health insurance market where, according to 2018 data, 56% of residents got coverage as members of groups underwritten or arranged by employers. Three big companies — Anthem Blue Cross, Harvard Pilgrim and Cigna — administered or underwrote most of those group policies. Providers rely on the distribution of risks associated with age, income, health and other factors to keep businesses viable.

Employer-based health insurance plays a key role in a complex market. So do government programs, which cover about one in four residents — either the federally run Medicare program, which is open to seniors and some people with disabilities, or the federal-state Medicaid program, which covers some low-income families and individuals.

The federal Affordable Care Act, which became law in 2010, shored up existing health insurance systems with federally supported markets for individual policies and incentives to expand Medicaid. In New Hampshire, the number of residents without any health insurance fell from 120,000 in 2014 to 77,000 in 2018, according to the state Insurance Department.

Recently, regulators and insurers have scrambled to protect consumers from costs associated with the pandemic.

Brannen noted that insurance companies — who are “trying to keep their accounts” — had also demonstrated some flexibility in their crisis responses.

Bill Brewster, vice president of the New Hampshire market for Harvard Pilgrim, said that his firm had “made concessions allowing employees to remain covered under their group health plan.”

Harvard Pilgrim has been “relaxing employer group requirements for (the) number of hours an employee must work to maintain (eligibility) for health coverage and relaxing the minimum total membership an employer must have to maintain group coverage,” Brewster said. “The relaxed requirements require an employer to have at least one employee that is working and that all premiums for the group have been paid.”

Anthem has also made concessions, including “grace periods” for the payments of premiums by employer groups, said spokeswoman Stephanie DuBois. “We have relaxed our guidelines in order to allow furloughed and temporarily laid off employees to stay on the employer group plan provided the employer continues to pay the premium for employees.”

Mark Slitt, a spokesman for Cigna, said that in March the company had granted “an extended relief period” to allow laid-off employees who had been working at least 30 hours a week to remain covered through May. That coverage was later extended through August, he said.

Brannen said that regulators have also seen some insurers adopt policies to increase the use of telemedicine — remote electronic interactions between patients and caregivers that take the place of office visits.

Employees who lose their jobs, and their coverage from employer-sponsored group plans, still have alternatives. The federal COBRA law allows someone to remain covered by their former employer’s plan for a specified period — typically, 18 months. But COBRA coverage — which requires the individual to pay the portion of the premiums previously picked up their employer — can be quite expensive.

The average annual premium for a group policy at a large employer covering one person was $7,500 in 2018.

Laid-off employees are likely to find cheaper alternatives in the Healthcare.gov marketplace for individual insurance policies that the federal government runs for New Hampshire, Brannen said.

Although the normal deadline to enroll in the marketplace, and benefit from the premium subsidies available to consumers who meet income guidelines, has passed, a layoff is a special event that opens a 60-day window for enrollment, Brannen noted.

Further relief — in the form of a projected 15% reduction in premiums for 16,000 individuals who buy policies through the marketplace but aren’t eligible for associated tax credits — could come if the state’s recently filed application for a federal waiver is approved. The waiver would allow the state to reinsure, or absorb certain high costs from private insurers, in a mechanism that would be primarily, but not entirely, funded with federal money.

“I would be very surprised” if CMS denies the waiver, Brannen said.

So far, there has been no visible surge in New Hampshire residents’ interest in individual health insurance, said Jeremy Smith, project director for NH Navigator, a Charleston, W. Va., firm that receives federal funds to counsel New Hampshire healthcare shoppers. After a brief spike in call volume a few weeks ago, the number of inquiries being handled by the firm’s five counselors has dropped off to a few a day. “We’re going to see that go up,” Smith said.

Brewster said that Harvard Pilgrim had seen only “very minimal” evidence of employees previously covered by group insurance losing coverage or using COBRA and no change in demand in the individual market.

In 2014, New Hampshire expanded its Medicaid program and raised its income limit to 138% of the federal poverty line. For the previous 12 years, the income limit fell in a range from 50% to 60% of the poverty line, according to the Kaiser Family Foundation, a health policy organization.

The full impact of the Covid crisis on health insurance may not become fully visible to the public until insurers report on their financial performances and submit new rate requests to regulators. Brewster, Harvard Pilgrim’s top New Hampshire executive, said that it was “very premature to speculate at this time.”

But some projections are due soon. A series of deadlines loom for insurers to make initial and final rate filings with federal and New Hampshire regulators for marketplace and small group policies. The earliest deadlines begin in May for a process that extends through August.

Kathleen Campbell, an insurance agent in Claremont, said she hadn’t been hearing health insurance concerns from consumers. Instead, she has gotten a lot of calls about auto insurance premium rebates.

“That’s the question of the week,” she said. “How much money are we getting back?”