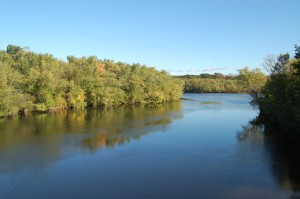 The Merrimack River as it flows through Concord.

The settlement was reached after New Hampshire made a claim to an arbitration board earlier this year. The parties also agreed to propose a formula to the commission to determine future reimbursements.

At issue is the Merrimack River Valley Flood Control Compact, signed in 1957. At the time, 18 New Hampshire communities agreed to give up a set amount of land for flood control. In exchange, Massachusetts would reimburse the state for 70 percent of the towns’ lost tax revenue each year. New Hampshire would cover the remaining 30 percent, and between the two states, the towns would get their lost tax funds.

In the 1940s, the U.S. Army Corps of Engineers took significant amounts of land in 15 New Hampshire locations as far north as New Hampton and as far west as Harrisville to construct large flood control facilities to prevent downstream flooding of the Merrimack River. Municipalities in Massachusetts receive most of the benefit of these facilities. Thus the compact was agreed to.

Under the compact, an interstate commission was formed with three members from each state who were to meet to decide the proper amount paid to the New Hampshire towns each year. However, since 2014, the commission has been unable to agree on a number, and Massachusetts withheld the amount it owed. Massachusetts has now agreed to pay the full amount owed to New Hampshire dating to 2014, Formella’s office said, but the agreement announced Wednesday includes the back payments plus a formula to determine future reimbursements.

The announcement will be good news to the New Hampshire towns along the Merrimack River that have been affected by the loss of property tax revenue. Under a law passed in 2012. The payments are supposed to directly from Massachusetts to the towns instead of the state. The bill, Senate Bill 326, was passed because previously there was no provision preventing the state from keeping the money.

In New Hampshire, the case was handled by Assistant Attorney General Joshua Harrison and Attorney Mark Lucas of the Office of the Attorney General’s Environmental Protection Bureau with assistance from the NH Department of Revenue Administration and the New Hampshire delegation to the commission.