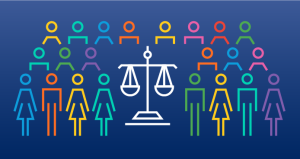 More than half of NH Bar Association members say they are satisfied with practicing law in New Hampshire, but when the numbers are broken down by race and ethnicity and gender, the story is somewhat different.

That’s according to a newly released report from the NH Bar Foundation, which conducted a survey of over 1,700 Bar members last year.

According to the survey, the two areas with the biggest “satisfaction” differences between female and male attorneys came in the categories of advancement opportunities and having control of work flow. In both areas, men said they more satisfied.

When measured by race and ethnicity, the biggest difference came in the area of responsibility level people have at work

And when it comes to actually experiencing discrimination, the survey measured responses on a scale of 1 to 5, with 5 meaning the respondent experienced a great deal of discrimination.

As for how satisfied the respondents were when it came to diversity at their own workplace, most women and men say they are satisfied, but a significantly larger percentage of men (78 percent) than omen (59 percent) said they either were “satisfied” or “extremely satisfied.” Some 40 percent of women said they were either “dissatisfied” or “extremely dissatisfied, compared to 22 percent of men.

Interestingly, the percentage of attorneys of diverse ethnicity expressed a similar satisfaction percentage (70 percent were either “satisfied” or “extremely satisfied”) as their white counterparts (69 percent) when it comes to diversity at their own workplace. The same was true when it comes to dissatisfaction with workplace policies, with 30 percent of BIPOC attorneys and 31 percent of white attorneys either “dissatisfied” or “extremely dissatisfied.”

In a letter accompanying the report, NH Bar Foundation President James Tenn Jr. wrote that the survey was conducted as part of the foundation’s effort to “understand the status of diversity and inclusion” among members of the Bar and “identify the impediments to and opportunities for action.”

“In short, he wrote, “the Foundation wanted to know how we collectively could “do better” and promote an inclusive legal community that reflects the changing demographics of our state.
He said the results of the survey “point to opportunities to better engage members, support women lawyers and lawyers from underrepresented demographics, and recruit and retain a more diverse workforce.”

Four tips for investigating racial and other bias complaints