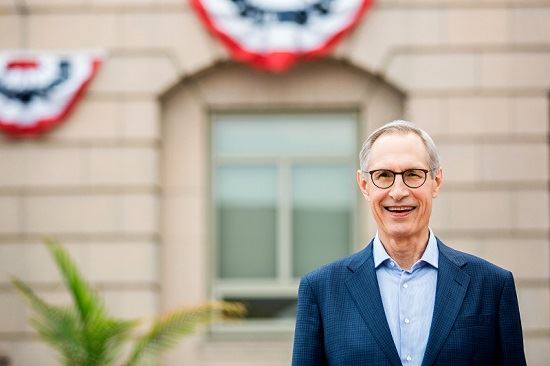 For four decades, proposed right-to-work legislation has come before the New Hampshire Legislature without success, in most years voted down by either the House or the Senate.

Proponents of prohibiting unions and employers from requiring non-union members to pay dues or fees for administrative and bargaining costs as part of a collective bargaining contract, say it promotes worker choice and forces unions to provide better services.

But opponents say it is right-to-work-for-less, union busting in favor of executives and investors, and un-American because it forces unions to provide their services for free to non-members.

Those arguments did not change Tuesday as the Senate Commerce Committee held a nearly day-long hearing on Senate Bill 61, the latest version of right-to-work legislation.

Proponents of the bill are hopeful with Republican control of the House and Senate and a proponent in the governor’s office, this will be the year New Hampshire joins the ranks of 27 other states with similar laws.

But opponents, who greatly outnumbered supporters whose speaker’s list filled 13 pages, said the middle of a pandemic is not the time for such a bill when greater worker protections are needed not less, and one person hinted the real reason the legislation is before the Senate may be the $100,000 in campaign contributions to 10 Republican senators.

The prime sponsor of the bill, state Sen. John Reagan, R-Deerfield, said the union members have been “riled up” by their leaders to oppose the bill, while the people who would benefit from the legislation “don’t know who they are.”

“They have not seen the offer of a better job or a new employer come into the state,” Reagan said, “because we don’t have right-to-work.”

His contention was challenged by Sen. Kevin Cavanaugh, D-Manchester, and a union official, who said businesses and emergency and front-line workers along with other agencies are working together for better protections during the pandemic.

“That is why this is not good for New Hampshire,” Cavanaugh said. “It seems like poor timing to me.”

Reagan said he did not see how the measure would harm front-line workers or interfere with what is going on.

At the public hearing Tuesday, there were few supporters of the bill, but many people turned out in force to oppose it.

Along with union members, opposition came from several business owners as well as Nashua Mayor Jim Donchess, who said it would take away the city’s ability to negotiate freely with the 17 unions of city workers.

Of those 17 unions, one is a closed shop, he said. A closed shop requires all workers to be union members and pay dues.

“We want to maintain the freedom of our negotiations,” Donchess told the committee. “The system worked well for many, many years and I hope you leave the system in place.”

Greg Moore, the New Hampshire director of Americans for Prosperity, a Koch network organization, said the bill would not interfere with the employer-employee relationship as some claim.

“The real interference is when a union certifies that they should represent all employees,” Moore said. “Right-to-work interferes less than the existing law at the federal level.”

Others testifying said no other business or organization would provide its services for free, which is what the bill would require.

John Buonopane, president of United Steel Workers 12012, said he is surprised that anyone believes right-to-work is good for working families.

“It is completely disingenuous,” Buonopane said. “It forces organizations, unions, to represent people without payment; that is un-American.”

Jonathan Nuno of Nashua, a member of the carpenters union in Manchester, said he has worked in union and non-union jobs and those jobs pay less, often with no benefits and make it harder to survive.

“It is night and day,” Nuno said. “Since I joined the union my life has changed, I am treated like a human being and I make a living wage.”

James Petrillo, a member of the Teamsters, said it is appalling for someone to not pay for services they receive.

“If you break down on the highway and call AAA for help, the first thing they ask is if you are a member,” he said. “If not you’ll sit by the side of the road for the rest of the day.”

But McKayne Boedeker, the New England director of Right-to-Work, said job growth in right-to-work states is double what it is in New Hampshire and contends workers in those states earn on average $4,500 more a year.

“This would guarantee the rights of workers to decide whether a labor union has earned their financial support,” Boedeker said.  “Good unions don’t need forced dues and bad unions don’t deserve them.”

‘Intervention into the marketplace’

Boedeker’s his economic contentions were countered by economist Lisa Shapiro, working for the AFL-CIO, who said the reports often cited by supporters of right-to-work states’ economic growth are also states with low energy costs and friendly business environments, which reflects a good economy regardless of whether they are right-to-work or not.

Shapiro said one study that isolates wage growth does indicate wages grow slower in right-to-work states than in those that do not have the provision.

She said even noted conservative economist Milton Friedman opposed right-to-work throughout his career “because of its intervention into the marketplace and government deciding it knows what is best.”

The Rev. Gail Kinney told the committee the economic reports cited by many supporters of right-to-work “bear false witness.”

She said the movement was begun by Texas industrialist Vance Muse, who sought to create divisions among workers along racial lines in the Jim Crow South.

Rick Gelinas said the real intent of the bill is to destroy labor unions by weakening their cash flow and ability to organize.

He has been in a labor union for 33 years and never heard an employer or employee say they wanted what the bill would do, he said.

“This bill is a solution to a problem that does not exist in the 603,” he said.

The committee did not make an immediate recommendation on the bill.