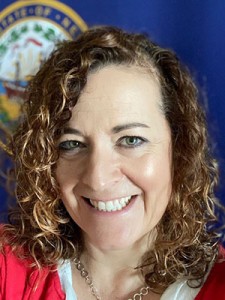 Lisa Lamphere, coordinator of the New Hampshire Victims’ Compensation Program and Address Confidentiality Program, has been elected president of The National Association of Crime Victim Compensation Boards in Washington, D.C.

Founded in 1977, the NACVCB promotes an exchange of information and ideas through a nationwide network of victim compensation programs. The association seeks to advance better methods for serving crime victims through various training and technical assistance activities, helping its members establish sound administrative practices, achieve fiscal stability, and engage in effective outreach, communication and advocacy.

Lamphere, who first joined the AG’s office as a Notre Dame College intern and then worked at the McLane Middleton law firm, has worked as a paralegal in the AG’s consumer protection and civil bureaus and has been in her current role for a do, a post she has held for a dozen years now. Lisa is also a member of the New Hampshire Attorney General’s Task Force on Child Abuse and Neglect and the New Hampshire Sexual Assault and Nurse Advisory Board.

Victims’ Compensation can pay for a wide variety of expenses and losses related to criminal injury, sexual assault or homicide. This program assists with medical care, mental health treatment, funerals, lost wages, security systems, travel costs to receive treatment, moving expenses, reimbursement for clothing or bedding held as evidence by police in a sexual assault and removal of identifying tattoos or markings of human trafficking.

New Hampshire is among 45 other states that are taking part in a $1.25 million multistate settlement with Florida-based Carnival Cruise Line stemming from a 2019 data breach that involved the personal information of approximately 180,000 Carnival employees and customers nationwide. New Hampshire will receive $10,907 from the settlement, the AG’s office said.

The AGs said that even though Carnival first became aware of suspicious email activity in late May 2019, it wasn’t reported until 10 months later.

“This case should serve as an example to corporations and company executives that quickly sounding the alarm to law enforcement is crucial when dealing with the aftermath of a data breach, as it is a best practice in preventing further loss of data and private information,” New Hampshire Attorney General John Formella.

A bill aimed at developing and retaining cybersecurity professionals in the federal workforce has been signed into law by President Biden.

The bill, co-sponsored by U.S. Sen. Maggie Hassan, D-NH, is called The Federal Rotational Cyber Workforce Program Act. It creates a civilian personnel rotation program for cybersecurity professionals at federal agencies and will enable employees to serve across multiple government agencies, allowing them to gain experience beyond their primary assignment and expand their professional networks. The legislation also will allow the federal government to offer civilian employees opportunities to enhance their careers.